Day 1:
We started our journey in Port Mirandia and were heading out to a fairly new farm in the area whose owner reported some problems. Our first day of travel was mostly uneventful as we did see some axe beaks in the distance but decided to not go any further near them and instead going around towards the supposed location of the farm. 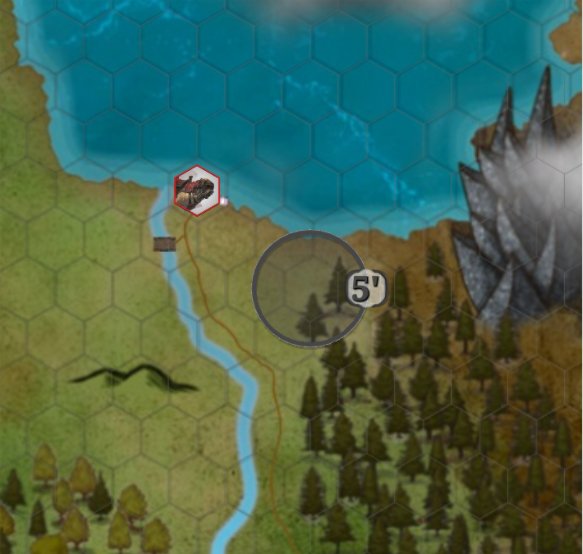 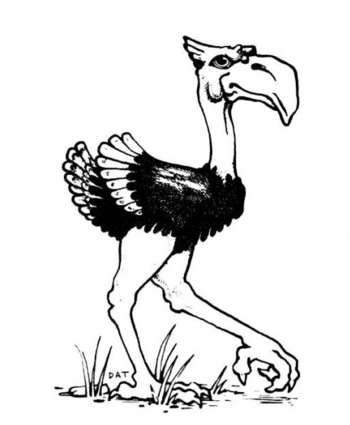 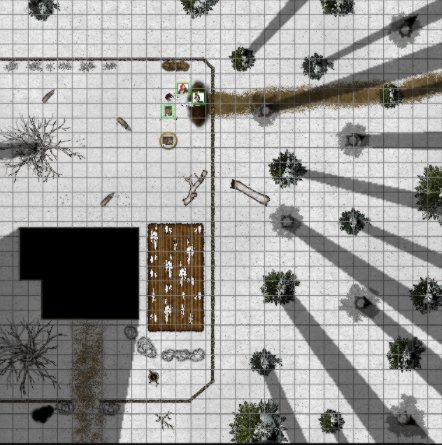 When we arrived on the farm it was snowing lightly and we saw a man standing near the farmhouse. He introduced himself as Kanzu and showed us around when we asked him about his reported problems. We learned that he used to have some more cattle but has lost most of it during the last week. Kanzu comes from White Moon Cove and decided to build a farm here but is now desperate as he only has 3 cows left.
Towards the back of his farm he shows us a hole in the ground that is roughly 10 feet wide and 5 feet deep before a tunnel can be seen. Apparently this tunnel leads west as the ground shows signs of recently moved soil. Kanzu tells us that he already tried closing the hole but whenever another cow was missing the hole would be back so that is no solution.
We ask him about if there are any carcasses or leftovers that remained from the cows to inspect them. He leads us to the place where he piled up the carcasses and what he was able to find. Nymphadora is able to show the rest of us bitemarks that are supposed to be done by spiders as well as some traces where venom might have been applied to.
As we were told by Kanzu that the creatures come out of the hole only every 2 or 3 days and have lastly struck just yesterday we assume we have some time to prepare some sort of surprise for them. We scout out the area for additional holes but find none and decide to camp the night here with some alarms set up. Based on the tracks we could find we estimate roughly twelve creatures and at least one of them must be roughyl 10 feet wide which was quite alarming to us. 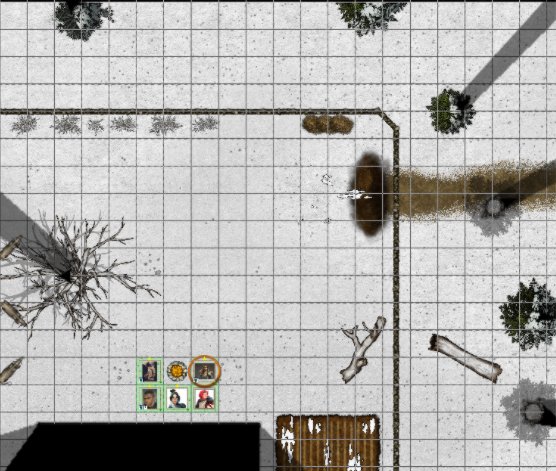 Night 1:
As Nymphadora has set up an alarm in the tunnel and reported some swarms of little spiders somewhere in there we also set up watches for the night. The first three watches went without anything to report but on the last watch the alarm triggered.
Tabbytha notices two spider swarms climbing out of the hole which retreat fairly quickly. Even though we tried to stop them our attempts failed and they are gone the next moment.
The rest of the night is uneventful.

Day 2:
On the next morning Kanzu checks back on us and after a discussion of several different ideas we asked him for an oil lamp which he gladly gave to us in the hopes that it solves his problem. We then began our preparation into the tunnel as we were sure that all other plans don’t ensure a guaranteed solution to the problem without somebody checking on what exactly is down there.
So we headed into the dark which was for some better than expected as Amber lended us her vision which allowed us to see in the dark a surprisingly long distance. We made it through the first 100 feet of the tunnel before we took a turn and found ourselves in a small opening where there was also some form of light coming out of some icy crystals.
When we approached as quiet as possible to us we noticed some increased sounds in the distance.

Towards our right we saw a huge wall made of spider webs before Zugall heard some clitter and clatter sounds and a decently sized spider looking at him. in fact we found ourselves almost surrounded by some spiders and a spider swarm. With a suddenly larger sized Zugall, a magical aura of some sort from Amber which illuminated the area and shielded us from some damage and some fire magic from Nymphadora we managed ourselves through the fight fairly well even though Nymphadora got unlucky trying to evade a spider swarm and required some healing magic to get back up. As we are still hacking happily away at the spiders there are some additional spiders coming form the south. 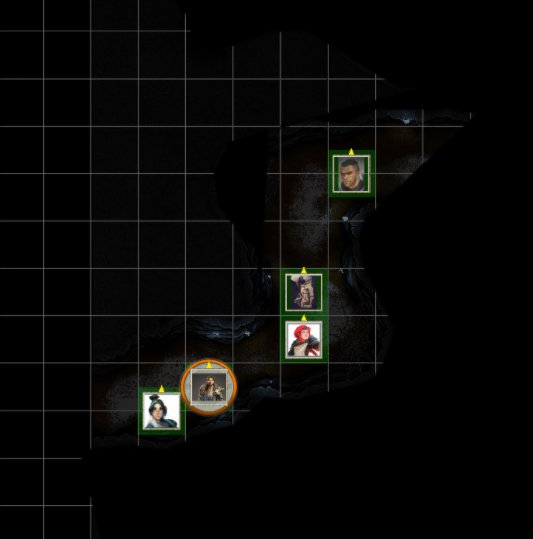 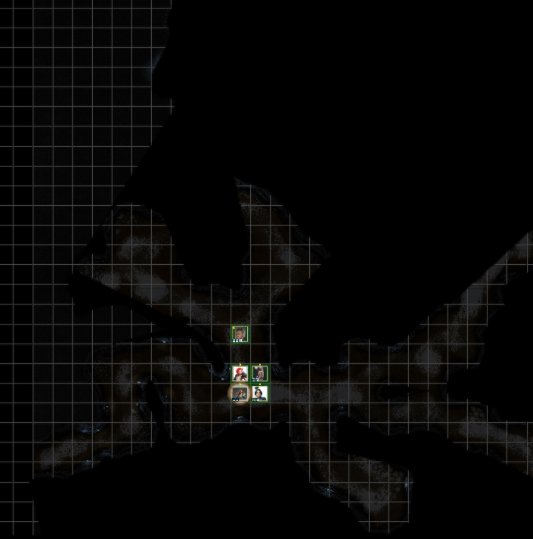 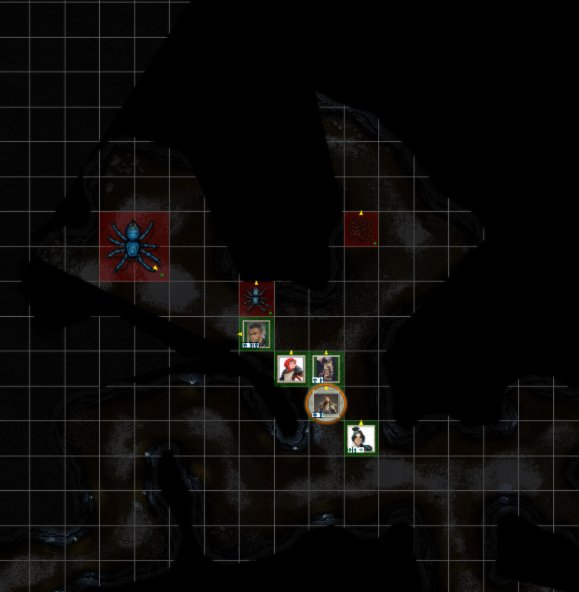 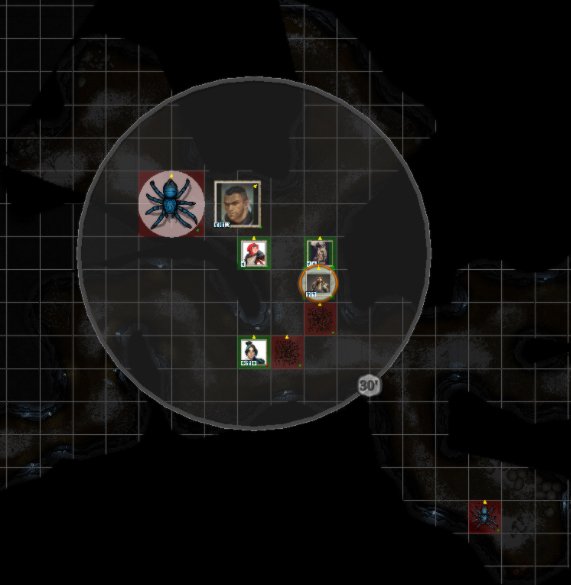 To get rid of the freshly arriving spiders quickly Tabbytha fearlessly stepped forward to get a better position but quickly found herself surrounded by two spiders and a swarm.
After Zugall slays the large spider next to him with his burning warhammer he and Amber regroup with the rest of the party and all of us retreat back closer to the entrance of the cavern after we finished this fight.
There we took some time to rest and gain some of our strenght back. Meanwhile Tabbytha scouts out other parts of the cave and began to burn away the spider webs. 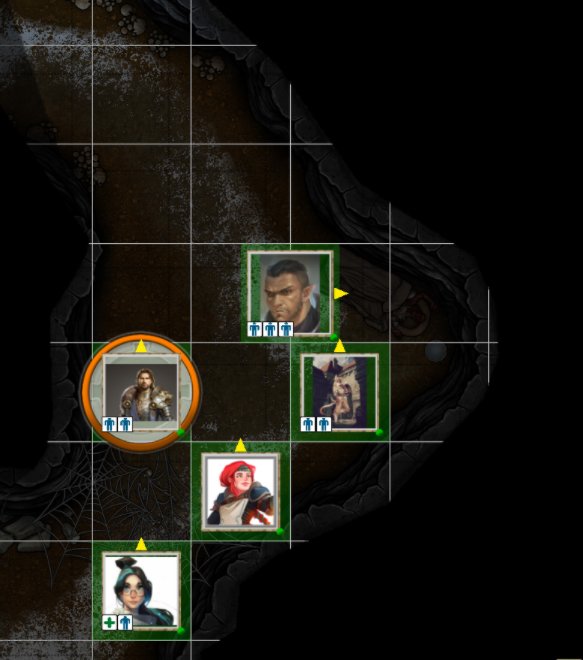 Apparently Tabbytha had found something as she lead us after our rest to two different parts of the cavern where she found a sleeping bag with a body and another body which is in a large spider web. We cut free the body in the web inspected it. It appeared to have been some sort of spellcaster as we found a scroll some coins and gems on the body.
When we headed over to the sleeping bag we found another body inside which appears to have been a human. On this body we found a small parchment of paper that read the following lines in dwarvish:
“The entrance to the Gar Maldir Dwarfs can be found at the base of the Himdun mountain’s. It is here bellow the depths of these peaks their homes may be found.”

We then continued checking out the rest of the cavern and fought our way bravely through spiders while burning webs and eggs along the way. Tabbytha then scouted ahead in another tunnel like part of the cavern and reported a large room up ahead as well as three large spiders of which one is almost twice as big as the other two. Quickly a plan was made to throw the oil flask we got from Kanzu to avoid a potential ambush.
In the following fight we were very lucky as we couldn’t report any major injuries while fighting the spiders. With a bless and a heavy hit against the biggest spider from Ander the party manages to slay the last of the spiders in the cavern. 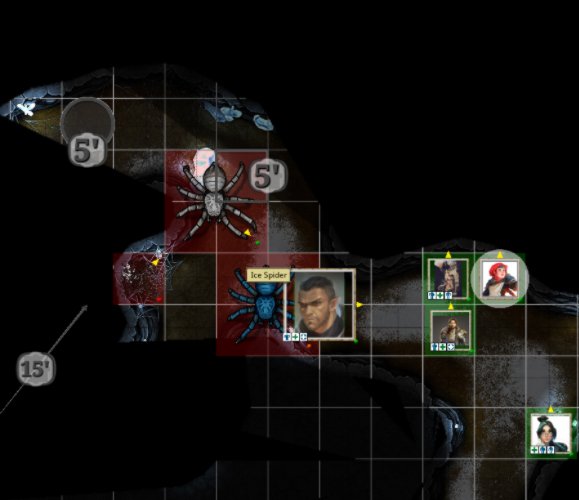 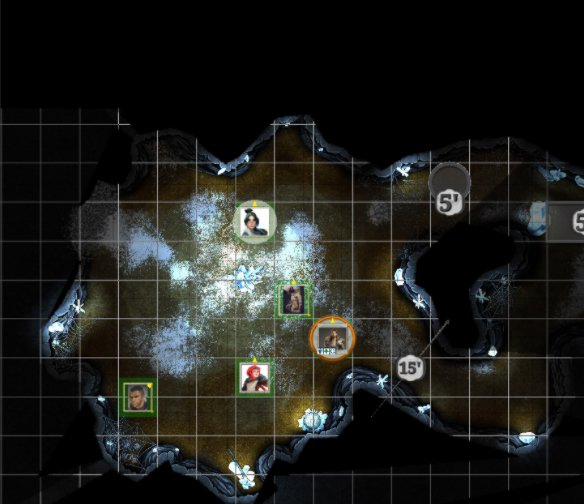 In the last room which is illuminated by a large crystal in the middle of the room we find a suprisingly large egg that is encapsulated in crystalls. It looks more like a small dragon egg in the form of a crystal though we had no way to be sure of that. However it looked fossiled to us.
There was also an ancient looking spear, which appeared to be in good shape though, that has been similarly encapsulate by crystalls.
Some parts of this cave seem to have broken down as there are some rocks lying around.
Overall we had the impression that at least part of this cavernous complex are not of natural origin and potentially have been carved in, though we haven’t seen any signs of who could have done that.
After we were done inspecting the room we gather the two bodies that we found to give them a proper burial on the surface.
We report back to Kanzu and let him know that he shouldn’t have any further problems with the creatures out of the tunnel and inform him of the cave complex in case he might have any use for it.
After that we headed back to Port Mirandia but had nothing to report on the way back.

As we arrived at the town all of us are very happy to have made it out alive and are happy to have helped one of our local farmers.

Thank you everyone for a fun adventure!