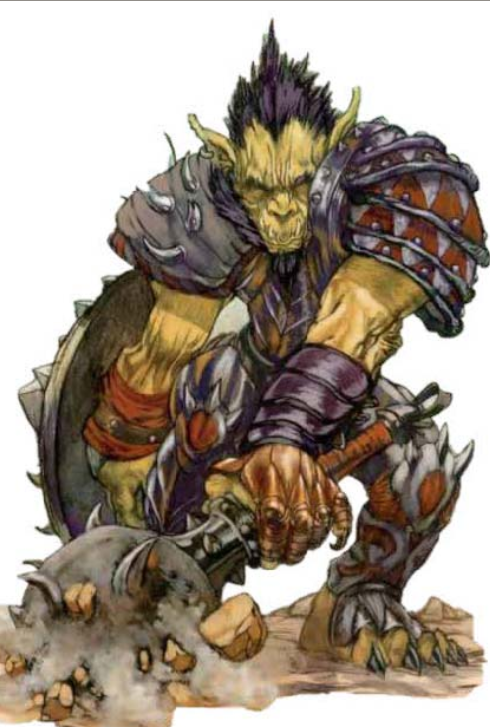 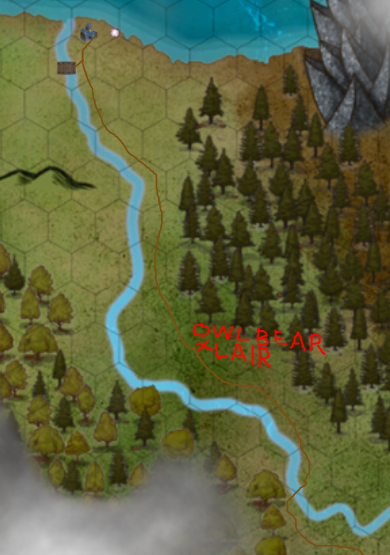 After my last few outings, and the countless stabmarks received, I took the next logical step and bought some decent armor. At least the shopkeeper told me it was decent… I think I got swindled because I can barely move in it, swinging a sword is almost impossible. I did however help me get unscatched through a fight with an Ogre.

Well, me and a few fellow adventurers, Marcus and Gray among them, decided to check out the forest south of Port Mirandia. We took the road south and reached the bridge without much trouble, but here we saw the classic, Ogre-on-a-Bridge, wanting tribute before letting anyone pass. It was already holding a group of priestly types back when we arrived.

Trying to expedite the situation I offered some of my rations to the thing, but it misunderstood and attempted to eat my arm. Gray was quick with his blades and a quick combat insued.

I’ll give you the cliff notes:
Acid from above
Stab, punch, crack.
Spin-for-the-win.
Brain-explosion.

Now with both the Ogre and Goblin dead (Yes there was a goblin, and no it wasn’t important) we talked a bit with the priestly fellow. He claimed to be a follower of the one true god Aspistés, he asked if I wanted to convert but wouldn’t tell me much more. Instead I asked for a bit of liquor knowing these folks always bring a bit of wine. Instead of a bottle he gave me a small tumble, and boy was that some strong stuff.

Appearently it knocked me out for a good 3 hours where the priesties chanted in strange languages. At least that’s what my fellows told me, I didn’t notice squat of that as I was on another spirit journey to visit a god.

Last time it had been Tsaran and it was barely enough time to give him a friendly nod, this time I journeyed through memories. Instead of telling you everything I saw I’ll now write all the important things I’ve learned, both from my journey and from talking with my friends on the way home.

Aspistés is a young god and has already killed one other god.
He and his followers destroyed a city. The city was larger than Ruined Oak or White Moon Cove (I guess, never been there, but people talk.)
His followers chanted untill the god attacked, folding the city walls like they were made of paper.
The attack happened because the followers were denied their rights of religion.
The city was probably Yuan-Ti and full of slaves.
The god has an internal struggle, it felt like it was fighting itself.
He looks like a brute fighter but has at least four arms.
He is exceting a black mist from his skin and glows with a faint purple hue.
During my vision something spoke to me, it was a strange language and I don’t think I’ve ever heard it before. Though my language skills are quite lacking.
Lastly I glimpsed a place: Somewhere important. It was I a massive cave. There were lots of Qua-Toa around. They were protesting against something. I the middle stood a large black pyramid, I think the god entered it, but at this point my mind is a bit hazy.

There might be stuff I’m forgetting but I was quite beat when I awoke. The priest asked a few questions and I might have invited him for a drink later. He said he’d come in roughly two weeks.

From here we had to head home, unfortunately the visions had left me unable to move and a blizzard was almost upon us. Instead of being caught in the open we huddled up in a cave with a huge owlbear for almost two days. Marcus kept feeding it his rations so it wouldn’t come for us. By the end of the blizzard I was well enough to walk, and now I’m here.

Reminds me, I need to hit the stables.