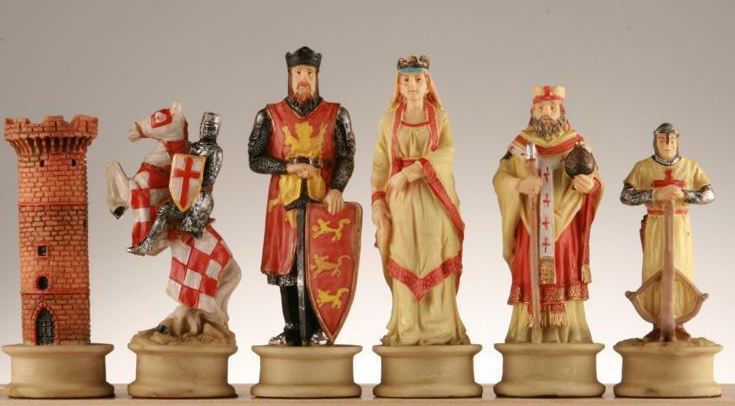 TDLR: a gnome is missing and without him, Cairn’a stone quarries construction can’t go on. A group of adventurers makes their way to find him. Little did they know they would be up against a King and Queen…..of chess! Also included is a guardian turning people into stone! At the end, the adventurers make it back with the gnome, dispel the magic petrification and the quarry can continue. Another of the Masters cryptics are also found with another sighting of Cleric and Clair in their mushroom house.

A lovely worker man came up to give us our directions for the mission. He says a stone gnome named Amban is required to complete the quarry, but he is missing, about a week ago, while looking for rare minerals; he was headed North…I guess that is where our adventure begins. I’ve never been to this area before and I jumped right on the opportunity to see a new land! We have a lot of adventurers with us for this trip. Orgeron has this wonderful wolf-like beast named Pudding…I think he will be of fine use as he’s already sniffed for Amban scent from a scarf of his. We get his description:

“He is about 3 feet tall, has grass green hair, grayish skin and wears a green tunic.”

The worker mentions he was headed towards Speckhome Glades and shows us a map. *The red arrow is Cairn’s Hold*

A lovely giant man looking for some food, although from the site of the dead monsters around him, I’m not sure how he has any room left. He claims these half deer half falcon creatures are bothering him. Orgeron cooked him some lovely food and after a bit of gold pieces, a pinecone, and a good joke he let us know what he saw. I also gave him some of my giant fig I had found, he wasn’t a huge fan. Apparently more of a meat eater. After some inspection it appears these figs have some kind of Charm magic in them. Interesting!

“I saw a gnome that had grey skin pass by about five days ago. He was headed north. He ran away when he saw me.”

Night falls as we head away from the giant to make camp and watches begin. During Beralts and my watch, Beralt spots a figure lying on the ground. We find an unconscious elf man lying on the ground with no recollection of where he is or how he got there. Upon magical investigation, Beralt and I determined that he is under the effects of some kind of curse. One that effects his short term memory. He has notes written in Elvish all over him, arms and legs that we can see. On one arm, determined to be his own handwriting we see this on the left arm

“The name of the necromancer of Serpens is Vendio Crayman.”

“you are under a condition that makes you forget recent memories every few hours. Check your bag.”

He says he fought this Necromancer out at sea, the west coast of the island. He wonders if we know where Traders Bay is and talks of a nasty storm that occured! Before we leave he makes some lovely paintings of us and some notes about our visit, along with a few gold, and went on with his day.

Further walking we find an old withered campsite with a recent fire. Following the tracks leads a tower like stone building. Inside the building we find a room that contains a drawing of a zombie and a stone golem, a chess board, (boy was that predictive), and some rotting vegetables, a chest containing a lot of gems; along with a trapdoor, which leads us to a passageway going below the building. Which opens up to a giant chess board looking area with chess piece statues in the room as well as a stone gnome statue holding a gem.

They begin to rumble and start to move and attack us. It was a very tough fight that ended with two of our members petrified, Vivi and Zeno. A guardian with deity symbols on it had been striking damage on those nearby and ended up taking down Orgeron. Beralt feeds him a goodberry and a few minutes later he’s back up. We aren’t sure what we’re going to do to get the petrified ones back to flesh…

After a short rest, we search around the room and find a door and enter it, inside is Clair! She’s terrified and her mushroom house is also inside this random room. She says Cleric is unconscious and found where we fought the trolls last.

We enter the mushroom and there he is clutching none other than one of the Masters cryptics. The code was a simple one: “Cleric”.

Inside is a vial and two notes:

One note consists of a random mixture of writing. You recognise it as the code needed to decipher the books.

“Hello Sweetie. I had to knock you out to gain their trust. No hard feelings I hope. I’ll see you at that place where we had the best tasting shrimp, then we can catch up.

Clair. Hopefully you’ve figured out the very obvious code and you’re reading this now. I used a spell to knock him out. The contents of the vial will wake him within minutes of him drinking it.

Ah the vial will wake him up…the Master follows us again! After an unexpected reaction from Cleric after waking from the potion, he takes off claiming we will never see him again and I hope this to not be true…We remember that there is a wagon in one of the room inside the tower and break it loose, placing Vivi and the gnome inside. Zeno is released from the spell by Clair.

We head out of the tower are on our way. During our nights of travels we hear locusts, monkeys and all kinds of sounds in this new area. We also run into a bard named Billiam Oris.

While we travel to Cairn’s Hold, Biliam and I play a nice tune as we go. We traded him some food for his songs and off he went.

We hear about a cleric Greyford, so we head there right away. He is able to bring back Vivi and the gnome for a hefty cost, one well worth it. He resides in Ruined Oak, we take the portal outside Cairns Hold. We thank him for his spells and time.

Amban says he went down into the chamber after smelling a rare stone..might have to look into that! Beralt and I danced the night away as well. He’s great! Until adventure is had again!