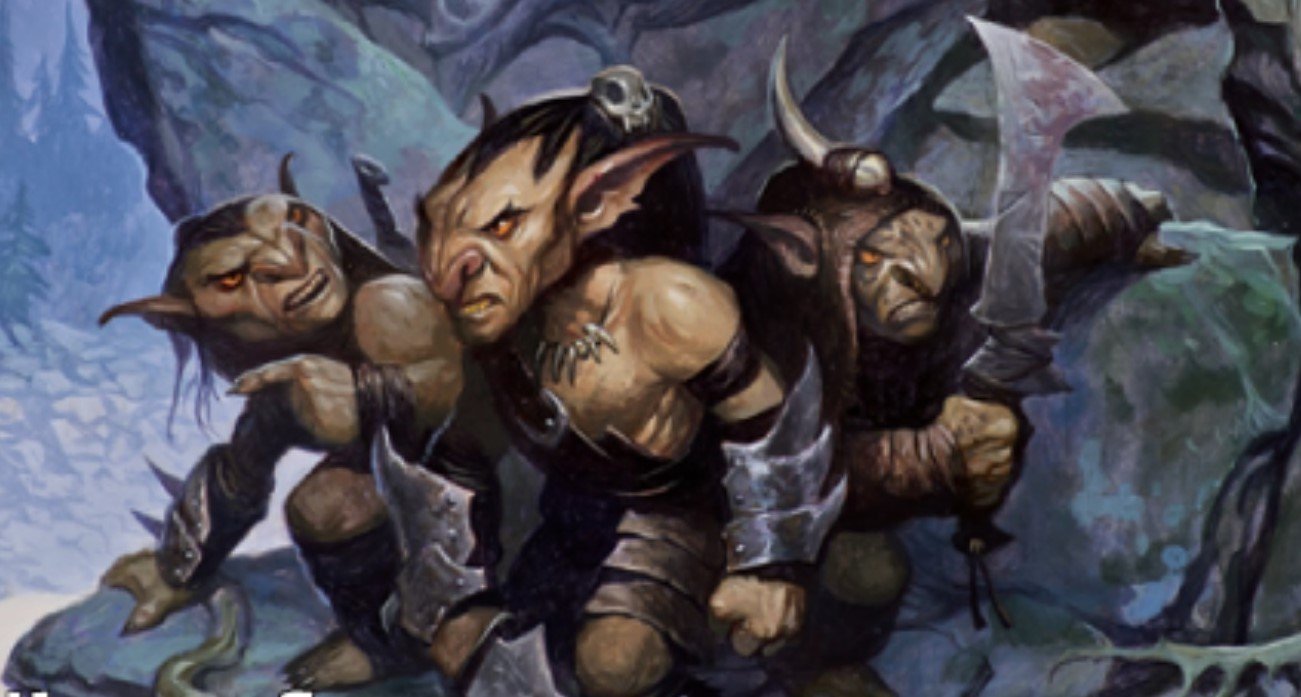 This tugged our heart strings. 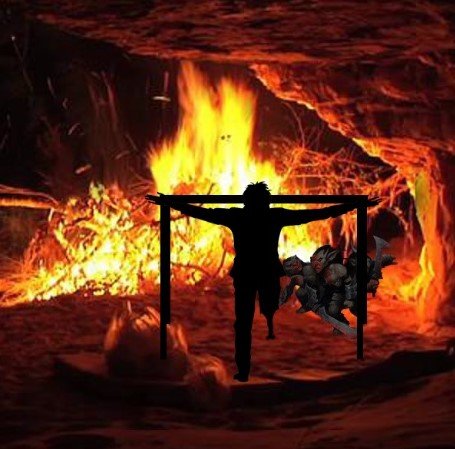 When invited to a Goblin Dinner Party, make sure that you are not the main course. 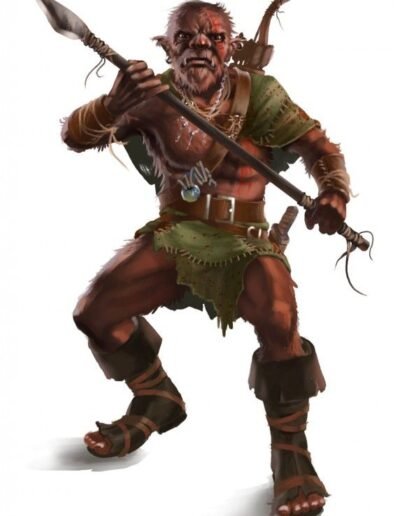 Bugbear with a Spear

I know Bugbears can be dangerous. I just didn’t expect it from within our own party. 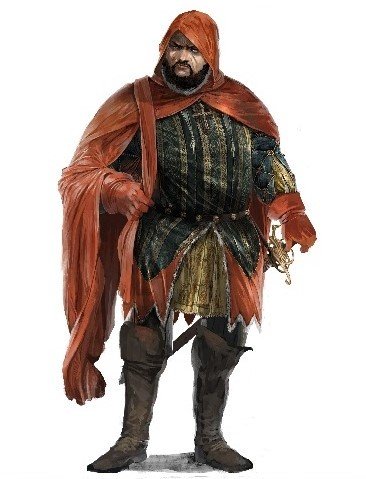 Although robbed of goods, he has enough gold for bounties…and to eat well.

Our party met at Ruined Oak. Our mission was to investigate the attacks by goblins in the area. However, even before we left town, a galloping horse carrying a crying girl approached the city gates.  The lass was but 9 years of age, and she breathlessly told the tale of her father, along with his workers, being savagely ambushed by goblins.  Her father, named Red, was transporting an order of pottery to a monastery.  The goblins captured them on the road to the east, and then carried them off towards the southeast.  These green imps were apparently led by a large one-armed ogre. We promised the distressed lass that we would rescue her papa, and placed her in the competent hands of the town guards.

We followed the road due east from Ruined Oak. Upon getting to where the road bends to the southeast, we found a fresh spring to water ourselves. We also ran into some locals, who confirmed that they saw a band of goblins heading southeast.  We traveled the road until it connected with another trail. At this intersection, we found the ruins of a wagon, along with humanoid tracks and a single large set of footprints. These headed south. They were strong clues that we were on the right course.  I then spotted a hooded figure observing us in a copse of trees. We hailed him and approached.

This person claimed that he was a woodsman.  He said that a dozen goblins and a one-armed ogre were hiding in a bear cave to the south. Additionally pressing the man about other events, he somewhat reluctantly revealed that a large undead creature as well as spider-like creatures were moving around the woods to our southeast. This person, named Ehrick, was of questionable disposition. I would not put too much trust in his motives, and would be wary with any dealings involving him.

We followed the tracks south.  Minago, the bugbear in the party, spotted smoke about 100 ft to the west.  But we also spotted the tracks leading into a cave entrance. Along with goblin and ogre tracks, we also saw large bear tracks going into the cave.

We entered the cave as quietly as possible. Julijonas cast invisibility on herself (as well as some health improvement songs on me and others).  We heard the bears sleeping in a cove to the north and nimbly scrambled past.  Deeper into the cave we went.  The further in we went, the more we could hear both drumbeats and screams. Soon the drumbeats were near deafening.  It was coming from behind a curtain.  Drawing open the curtain revealed a prisoner being tormented near a bonfire.  These beastly goblins were carving away his leg and eating the flesh, even though he was still alive.  The sight would have traumatized normal folks. Fortunately (or unfortunately) our party has seen many horrors on Sleeper Island and was not demoralized.

Julianias gave me and others an inspiring song. She was still invisible and would remain so throughout the fight. Myself and others charged forth. There were about eight goblins and a sturdy looking bugbear in this chamber.  The bugbear charged us while the goblins fired arrows or spells. Bran bravely engaged the bugbear, along with our own bugbear – Minago.  I would also join this fight.  Meanwhile, GarGot changed into a large brown bear and rushed the goblin hordes.

Destiny had warned us that she had wild uncontrollable magic.  Her first spell gave her a third eye in the middle of her forehead.  I thought this to be strange but benign.  My preconceptions would be quickly proven wrong.  Her next spell caused everyone around her to have their armor stretch, creating gaps where easily arrows and other pointed weaponry could gain significant purchase.

The enemy bugbear (who was standing near a grated pit full of captives) was tough, causing sizeable wounds on us, and Bran in particular. But it soon succumbed to our combined focus. Meanwhile Bran responded to Destiny’s call that many creatures were approaching from hence we previously came. Myself, I had taken some bugbear club hits, but thanks to Julijonas’ previous songs, one could say that it was like I was not hit at all.

Meanwhile Julijonas invisibly snuck up to free the man on the spit.  GarGot was a one-bear fighting machine, handling several goblins at once. Bran and Destiny were in the chamber tunnel, handling rat swarms and more goblins coming from the rear. Minago and myself went to handle the other goblins near the human spit. As Minago-the-bugbear lunged his spear at a goblin, he instead pierced me through a Destiny-made armor gap. Minago’s thrust was so purposeful, that not only did it completely skewer me, it made the goblin laugh and congratulate Minago for being a true goblin friend – hiding his intentions until now. As I was slipping towards a death sleep, I heard Julijonas’ melodious tune in my head, healing me just enough to stay standing.  Minago’s next stab finished the goblin, to both the goblin’s and my surprise.  Minago did not apologize for the near fatal blow, which makes me question his motives.

Soon after this incident, the party was able to dispatch the surviving evil doers.  Bran even managed to scare a goblin into surrendering.

I cauterized the missing lower leg of the human spit victim.  He will survive, but be forever maimed. We released the captives in the pit, who among them was Red.  Red said that one of his workers were taken away from this room.

All the goblin dead showed signs of being ritually scarred and maimed.  All were missing an eye and a finger. They all also had the same strange tattoo.  Interrogation of Bran’s goblin had him blathering about someone name Landra being responsible.  Goblins are such idiots, it was hard to get more of what Landra was about.

Julijonas invisibly snuck to the south where there was unintelligible conversation mixed with screams.  She found the potential source, located behind a likely secret door.  She led Bran and myself towards the location.  We heard guttural talk, and a scream cut short, followed by a thump. Our logical guess was that the one-armed ogre along with another had just killed the missing party member. Being that we were all severely wounded, and had rescued all but one of the pottery travelers, the party thought it best to make our escape.  I hate retreating, but it was the logical choice.

Our return trip followed the road that we came on.  At where the road bends from northwest to west, near the spring we watered earlier, we ran into a friendly encampment.  They were introduced as Pietrov and his family.  They seem to be merchants and entertainers. Pietrov was hospitable, and stated he was recently robbed of his wares by goblins.  Pietrov offered rewards for the return of his goods, and even more desirous, any goblin heads that were brought to him.  He appeared to have a newly found hatred for these goblin menaces. He wanted us to spread the word of his goblin bounty.  We spent a pleasant evening at his camp, and returned to Ruined Oak in the morning.  We reunited Red with his daughter, and were rewarded handsomely by him as well.  With that, the party disbanded, being that our mission was a success…for the most part.