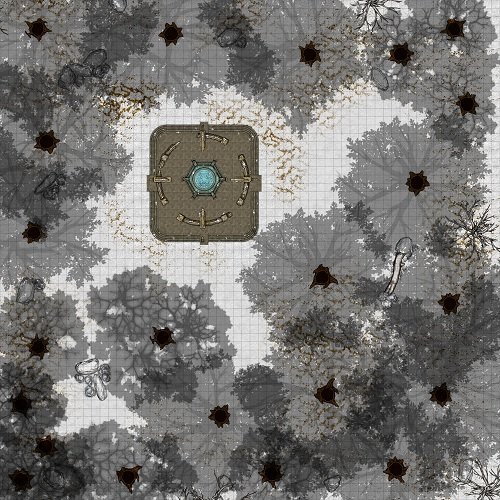 Mission: Explore Around the ZHT Portal

We left Ruined Oak heading to the portal and when walking through we saw the signs of the previous battle but no the bodies of said battle. We also noticed some rather large drag marks heading away from the area south towards a large statue. 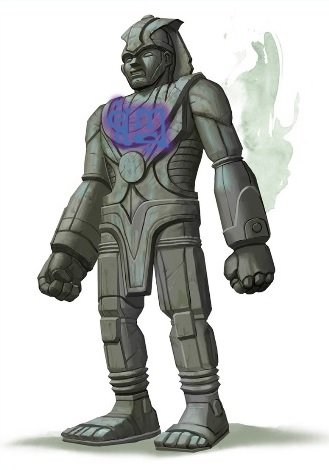 Upon closer inspection there was some runes placed on its chest in what I can only assume is the giant language after my dealings with Zugall and his rune usage. I was boosted up to the runes and read them using comprehend languages. It read “King” and in my assumptions this was a king of an old Giant kingdom… just as other portals were built on or near ruins this one seems to have that same pattern. Continuing south down the path we found a weird stone structure in the pathway that had more writting of this language on it. 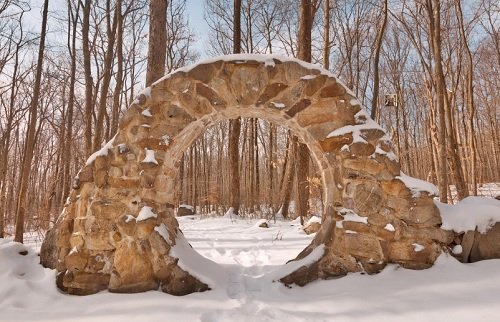 The writting on this arch structure read ” Kingdom of Kouha” we later discovered that this is in fact and old kingdom of the giants. After some further inspection we continued to head south leaving the area of the portal and into the uncharted cold.

So it is very cold here… like unexplainably cold and I really hope it is not this way at night.  First things first those wild magic surges or fields… they are in this area of Katashaka as well. That said we saw some Elk eating very calmly in the woods. Around this time we heard some strange humming. It was very loud, but Daf noticed the Elk did not seem to mind it.  Some debate and we headed toward the loud sound. Getting closer we saw a marvelous sight. 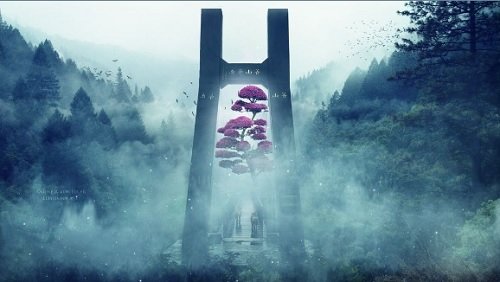 Oros felt a connection to the large archway and the place that lay beyond. He touched the pillars and said he did not feel any fear. We moved forward towards the large tree and when Oros touched the tree runes around the base light up. These were in the same language as the previous things we found but I did not wantto risk casting magic in the zone we might have been in. We all decided to touch the pillars and the tree and we had different outcomes. Oros, Daf, Murdrum and myself all felt no fear and the runes around the tree light up. Balthier said nothing happened. Tenfoll’at and Yondu said they felt a slight sting. This place was so peaceful and a possible place to stay if in danger. We however decided to keep moving and further explore the are around the portal… Turning east towards the mountians. As we headed this direction we heard the scream of a woman and rush to see the issue. No longer in the weird magic area I cast Comprehend Languages to be able to understand the situation. 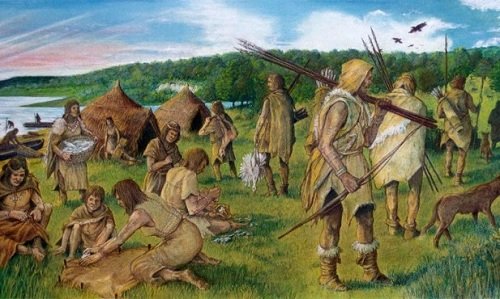 Four men with spears hada woman cornered into a river. They spoke orcish but were clearly humans. The men claimed the woman wasa dead eater and were shocked to see us thinking we might also be with her. Only Oros being able to speak directly to them they began to attack the lady while ignoring his commands. Oros bashed the man speaking with us as the others stabbed at the woman. Balthier shot a warning arrow inbetween a spearman and the lady . This did not deter them…  Tenfoll’at Levitated the lady twenty feet up. So i cast hypnotic pattern and felt pretty good I had them all. However to my surprise this lady appeared asa weird outline ofa human and was right next to Oros and struck him. 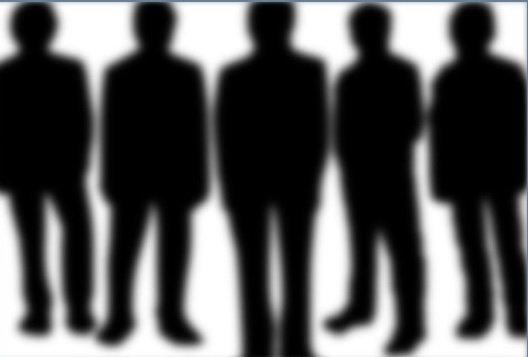 I projected my ward to lessen the hit onto him and we began to turn on this creature. It did not stand up for long but when it did fall its body sort of exploded and flung goo and weird spores at those near it.  We woke up the knocked out man and freed the other three of their stupor. He freak out seeing Oros being covered in some of its goo and told him to wash off in the cold water.  He claimed it wasa Corporicor a creature that walks like it is alive, but eats the dead.  After a Gift exchange and metal dagger from some of their crafted jewerly Oros spoke more to them about the surrounding area. This tribe is very primitive but had some basic knowledge of the area.

1. Four tribes around the portal. All speak orc.

2. Giants in the mountians to the east

3. White Dragons in the mountians to the east as well.

4. Structures to the west farther than the wolf tribe

5. The place we found with the tree was a Sacred Site of the Dragon Warriors.

6. Said the Kingdom of Kouha was an ancient giant kingdom.

We decided to keep exploring and they went home to tell the elders of us and find out if we would be welcome in their village. We travel a bit more and bedded down for the night.  Remember I said it was cold… the Bear Tribe told us it gets colderat night… well this cold is nearly unnatural glad I have my hut to keep me warm.

Fey Spiders a Way With Webs.

We woke up and Tenfoll’at informed us of a flashing blue light in an area and we decided to check it out. Turns out it was coming from a cave. 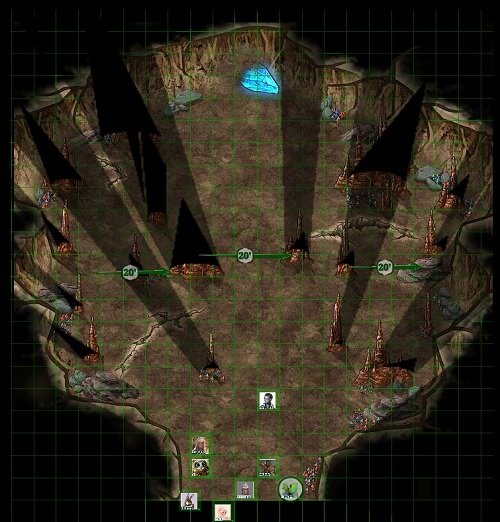 We entered cautiously and noticed webbing across the midpoint of thecave and expected spiders. We did not however expect spider creatures… Murdrum later guessed these might be Beli. 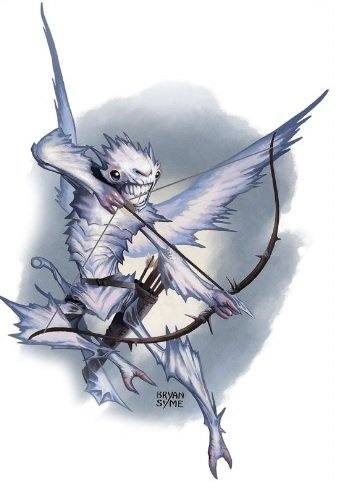 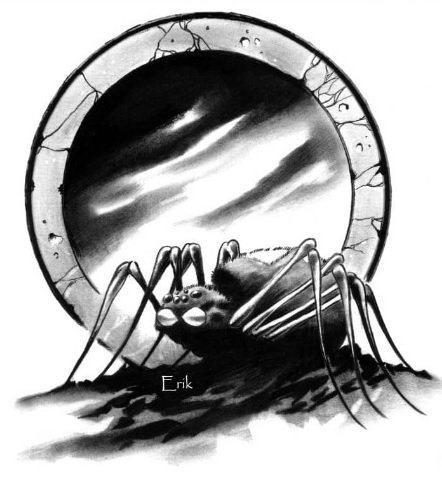 Working together it seemed these creatures and the spiders trapped travelers for whatever reason tricking them with the light spell on the large rock. They were very good at hiding and shooting some arrows… very Tweelike and the spiders webbing had the ability to slow you much like the magic spell. We killed most of them and search the area for their horde. Took the goods and made our way back to the portal. 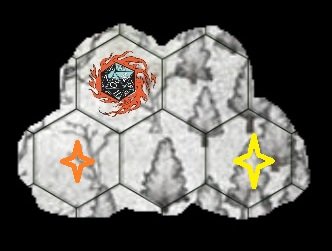 Progress thus far around the portal.

1. ZHT portal is located with the flaming polyhedral

2. The orange star is the area we found the Sacred Sight of the Dragon Warriors

3. Yellow Star is the cave with the Beli and Spiders.

After this encounter we decided to not push our luck and head back to the portal. Once arriving we put in the stones to come back to LAS and head to Ruined Oak.