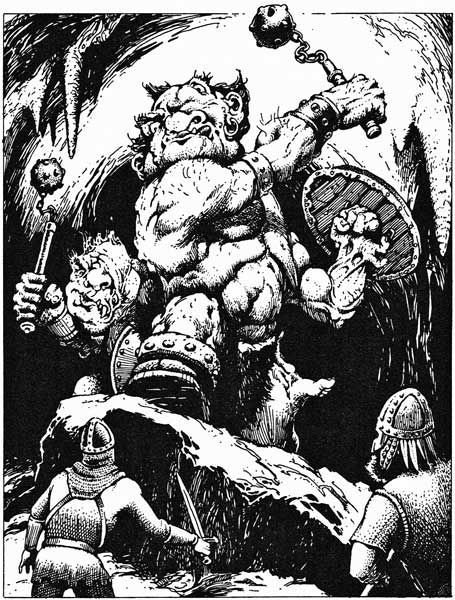 Risk 06 Incapacitated is likely, Death is a potential.

In the time of King Erik Three-Hundred-and-ten,
in ancient England, Called Albion then,
the Monks of old looked to the sky,
to ask of their God who, what, how and why,
alas, they found no reply

The frustrated Monks turned to magic forbidden,
incantations of the Dark-Arts they’d hidden.
With seeds they pulled from a magical pod,
the Monks grew a path-way to seek out their God

But when they came to what they thought was Heaven’s gate,
they met with a terrible, grisly fate.
For between Heaven and Earth is a perilous place,
Gantua, home to a fierce giant race

With the bridge now before them
to the world of men,
a plague of giants descends.
Taking a cue from the richest of kings,
they acquired a taste for acquiring things.
But one taste that caused them to lose control
was a taste for the mankind blood, bones and all

The Monks that remained were brought to the throne,
for this nightmare was caused by their actions alone.
King Erik bade the Monks to return to Dark-Arts,
to find him some way to rule giant hearts.
So they melted one down,
and crafted a crown,
unlike any before,
built with iron and hatred, magic and more

As soon as the King took crown in hand,
the giants were slave to his every command.
Erik severed the link between giants and men,
and peace returned to his Kingdom again.
The mystical relics were all that remained,
safe with Erik all the years that he reigned

And at last when the time came for King Erik to sleep,
he took crown and seed with him for permanent keep.
And as the King’s bones crumbled away,
truth became legend, or so people say

But jealous eyes are looking down
on peaceful fields in Albion.
An enemy vows there’ll come a day,
when giants return and giants stay.
To avenge a thousand-year-old sin,
and eat the last of Erik’s kin
…

Fee Fi Fo Fum.
Ask not whence the thunder comes.
Ask not where the herds have gone.
Nor why the birds have ceased their song.
When coming home, don’t take too long.
For monsters roam in Albion*

For between heaven and earth is a perilous place.
Home to a fearsome giant race.
Who hunger to conquer the mortals below
Waiting for the seeds of revenge to grow