Of Cultists and a Spooky Castle 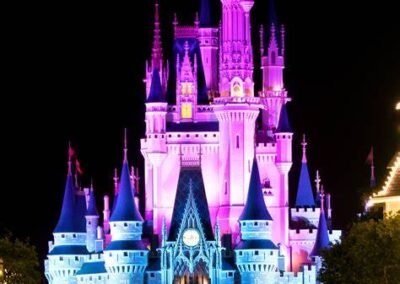 Won’t it be wonderful to visit a castle? 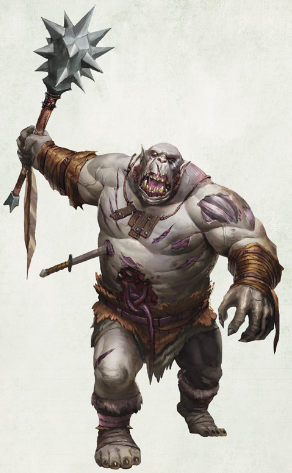 No wonder he wanted to be brought back. Undead Ogres smell just as bad as the living kind. 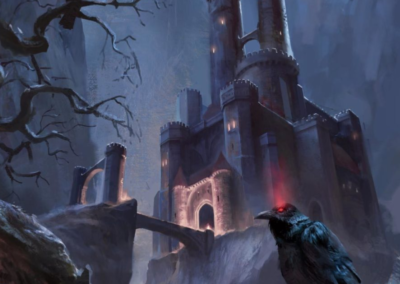 This doesn’t match the picture in the brochure. And where’s the dancing princesses and fairies? Can we get a refund? 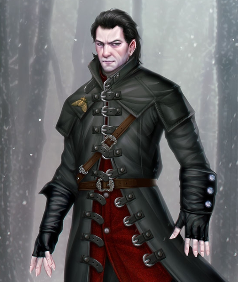 He does not look a day over one thousand. And how does he keep his skin so pasty pale?

Our intrepid party met at Port Mirandia, and the weather was still wintery, but nice. We have heard of a strange castle called Blackwatch Keep due west and set out to investigate. Once again, my trailblazing skills were in demand. Having study both maps and the land, I was able to find a very efficient route to our destination. However, it would still take the full day to get to the castle.

We passed over the bridge and into the open landscape. Around noon, we saw a large rock formation. From the distance, fires and activity seem to be emanating from the top.  We decided to investigate.

As we approached, we noticed a narrow path that led to top.  There were a large number of humanoids dressed in robes at the peak chanting around a shrine.  One them came down and tried to convince us to leave. Our party endeavored to engage him to get information on what they were doing, as well as about the castle a few hours away. This cultist was evasive, to say the least, as we heard the ceremony getting louder on top. He mentioned their deity being Vongrimath, and I vaguely remembered a log that was he was an evil god. I said a silent prayer, and my god let me feel that this cultist and their ceremony was purely evil.  Having enough of the charade, I told everyone they’re evil, and threw a javelin at the cultist.

Fighting up the narrow path was hazardous due to drops on both sides, as well as there was a five foot rift that that interrupted our route. Jumping is definitely not my strong suit, even without heavy chainmail. But Samael leaped the gap, and stuck around to help me and others across.

In the mean time, Amal had nearly gotten to the peak, when the main cultists managed to summon a large undead ogre!  Speaking giant, he was praising Vongrimath, and how he would bring more from the dead – which the cultists seem to hope for themselves as well. There was a furious battle with the party trying to eliminate the cultists before they summoned more undead (they did call in a skeleton) while also fighting the fierce undead ogre. Murdrum managed to push the ogre off the treacherous path several times with spells, doing considerable damage. In the end, we defeated the cultists and their unholy spawn, and with a short rest (and Jerime’s doctor skills), we were in pretty good shape.  We found a Cultist Book. We were unable to decipher its writings, but vowed to bring it to town for further study. Then Samael and myself took a victory whizz on the summoning alter. I further desecrated its runes with my axe (which, upon reflection, I should have done before relieving ourselves on it).

We continued on towards the castle. We arrived just as night was falling. The castle was shrouded in mists with a bridge crossing a black bottomless chasm. As we approached, eyes seem to peer from its walls, and the feeling of shadowy hands grabbing us, but gaining no purchase.

At the door, a butler named Nigel greeted us. We were taken into a grand hall where Sir Coel Frewer sat.  He explained that Alexandria owned this and several other similar estates.  Coel has been in these lands a long time, including when there was an ancient Empire of Katasas who enslaved the land. His mannerisms were discomforting and had a vampire-like resonance. Again, I asked for divine guidance to spot evil, but Coel, Nigel and the hunter/cook were not.  But the ground below our feet radiated evil entities.

Coel explained that he had two tasks he would pay for (which made Samael drop all inhibition).  The first was to the northeast, where Ancient Stalkers roamed. Specifically two had Alexandria’s Blood Diamonds. They were Kortan and Thorin. From previous logs and descriptions, one would guess that they are werewolves.  The second task was some haunting spirits that keep returning to the basement below, and he asked that we get rid of them (almost certainly what I sensed earlier).

We said that we needed to consider it. We were offered to spend the night at the castle, as well as get a tour of the library from Nigel. Coel excused himself, and forbade us from going to his private second floor area.  The library contained many ancient volumes, mostly of poisons, necromancy and other unpleasant arts. But a couple locked books were about cursed stalkers and werewolves. No doubt related to the Ancient Stalkers to the northeast.

The bedrooms were down a long hall. Not trusting our circumstances, we posted guards. Before turning in, we discussed taking on the tasks. Pretty much everyone seemed convinced that we did not have the weaponry for these tasks.  Myself, I was confident that we would fair well in the basement – but I stood alone. So we went to bed.

Samael had the first shift, and woke me after hearing and feeling things on one of the walls. Samael, although brave in fight, seemed particularly afraid of spirits and ghosts.  I took over guard where Samael stood and Istasha was at the other end. Soon I heard and felt what Samael did. I began searching the wall.  Like jumping, I am not good at searching for hidden levers – but Torm favored me, and I found a secret door.  I encouraged Istasha to follow me. We were in a small room with old bloodstains and a staircase at one end leading down. As we crept closer to the moans coming from the stairwell, the door closed behind us firmly. We rushed back, and tried as we may, could not open it.  Apparently Samael heard us, but was too scared to make good decisions (unlike me, he had at least an excuse for his bad decisions). Meanwhile, my boldness was fading with the realization that Istasha and me were not enough to deal with whatever was coming up the stairs.  Moments seemed to hang for hours, but finally Amal found the secret door.  We gratefully returned, closed the secret portal tight, and turned in for a restless slumber.

Morning arrived. We were served a fine breakfast and decided to part, with promises to return when we were better equipped for the tasks.  Sir Coel gave us some gifts for the promise and to entice our return. The party seemed grateful to leave the eerie castle, but I as walked away, I still was itching to deal with the evils that Sir Coel tasked…as well as to figure out Sir Coel’s true motives.