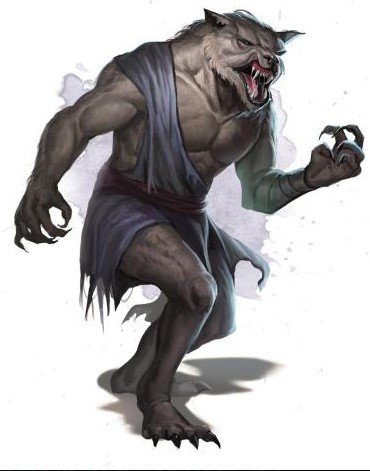 We went to help a farm whose sheep had been getting slaughtered. We heard from the farmer that wolves were killing the sheep. They came from the northwest every night and dragged the sheep bodies away. 6 wolves and 1 big wolf. We decided to stay the night and wait for the wolves and set up an ambush, with Murdrum casting Mold Earth. The farmer thought something might have spooked the wolves. The farmer used to be from Ruined Oak but lost his farm and came to Port Mirandia. We ate dinner at the farm with the farmer and his family.

During the night, the wolves arrived. The large wolf transformed into a werewolf. 2 other werewolves appeared in hooded cloaks, but Zugall managed to become large and throw them in the pit. We burned them in the bit with grease, oil, and Create Bonfire.
We found a locket on a werewolf. The locket was not magical and had a picture of a farmer and his family on the farm. It was a different farmer than the one we were helping. The sheep were scared, but Julijonas managed to soothe them with her song.

I felt an arcane diffusement in the night and injured myself casting a spell. I hope this will be warning for other casters if you feel an arcane disturbance in the air. I also saw a figure in the night but ran away before I got a good look. There was also a loud meteor shower.

Day 2:
We showed the golden yellow locket to the farmer. His name was Logan. He recognised the locket and the farmer whose drawing was in the locket. The farmer’s name was McDonald, and he and his family were relatively nearby in their farm. They were in the same direction that the wolves came from. A foreboding sense creeped on me as a thought occurred. Perhaps the family had become werewolves… We decided to go there to find any remaining family members. Amal suggested burning the McDonalds’ farm, which was… concerning.

We arrived at the farm and began digging a second pit. We were attacked by 3 werewolves while digging. They seemed to want to get me for some reason… We managed to throw one down a 10fwt deep pit.

While getting away, Julijonas and I found a girl in the closet named Nia McDonald. While listening to her, Murdrum and I finished killing the werewolf in the pit. Nia said that the wolves came from the north. She had been surviving on potions of healing. She asked where her mother was and cried when she heard that her mother wasn’t doing so well and hugged onto Julijonas. Perhaps it was an instinct of the child to cling to a maternal figure…

“You will have to stay strong, child. If you travel southwest, the other farmers such as Logan can take care of you after we have a funeral for the departed.”

Nia nodded tearfully and hugged onto Julijonas. My speech went relatively well. Thankfully. I am not great at talking to the youth…
We gave her the golden locket. Nia had a wound on her arm from the werewolves. The others treated it, but we couldn’t tell if the wounds would cause lycanthropy or not. I checked with my spells, but they didn’t detect anything.

We took Nia back with us to the farm. We saw giant hyenas on the way back to Logan’s farm. We reported that the McDonalds had become werewolves. Logan took Nia in as an adopted child. Nia gave a wry, sly smile at Julijonas, which she returned rather suspiciously. Thankfully, nothing happened to Nia such as turning into a lycanthrope.

We stayed at Logan’s barn. I buried the bodies of the werewolves and wolves from last night and gave a prayer to Azuth that I forgot to do previously… Horace helped. During the night, I dozed off a little as my trance was slightly incomplete. Thankfully, no threats attacked me on my watch. Zugall saw a wizard in the night, but the wizard passed us by, buried in his books.

Day 3:
Julijonas taught Nia the F word. We headed back to town and checked out the spot where the meteorite fell two nights ago and saw that there were chunks of rock with crystals on them. I cast Detect Magic on the meteorite chunks and saw that my skin and clothes began to illuminate with a golden light due to an arcane enrichment. It lasted for a while. The meteorite chunks emanated various schools of magic such as evocation. I gave it to the market for selling. I hope I can find someone to remove this glowing effect from myself, although Julijonas Urbonas mentioned it looked nice…