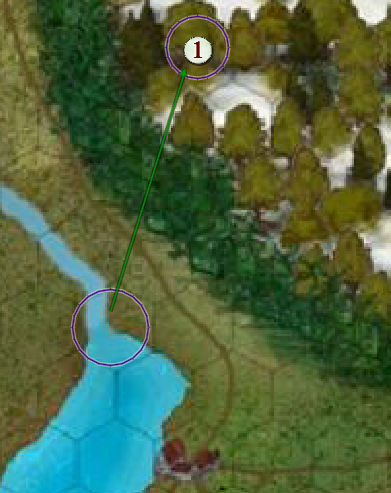 On the intelligence of a minstrel concerning an accelerated yet secluded egress deeper into the Briarwall Forest frequented by slavers along with other foul abberations of the groupthink kind after the confrontation of whom we encountered and proved our mettle to drow of a strict caste system; and other encounters.

Prepared on: The Third Day of Hammer in the Year of our Lord 1496

Having an abundance of information gatherers is rarely a poor investment and Moon Sue says as much reminding us however such individuals must be “employed without a certain intuitive sagacity.” This in mind, we received Billiam the Bard’s message to the following effect:

Follow a Trail to the west of the main road. Find a rectangular stone pillar that has the work “ally” inscribed on it in Aquan. Tap each face of the pillar twice. Follow the tunnel. Bring Light.

Some in the party more well-informed than I recognized this as an opportunity to find a more expedient and potentially more secure means of travel into the Briarwall Forest. After some casting about, Bardy was able to spot the very stone we sought (see picture below) and fortunately Faenoa is still very much in the early stages of wizarding where it behooves her to constantly be practicing her comprehension of languages. Thus, after tapping the sides as instructed in no time the Aquan yielded to us a bit of a riddle.

Ally: Smuggle the sacrifices from the forest. All sacrifices must be drowned before being provided as fuel for the __.

Faenoa feeling the most in-tune with the language at this point drew a bit of her own blood and wrote KRAKEN in a large, scrawling, Aquan script that would make any penmanship tutor grimace, but did cause the stone to unveil a passageway just as the bard claimed.

Having a sudden epiphany, the group headed briefly to a nearby former temple to the Deep Ones that frequented the Lake of Songs well before my time on Sleeper Island, but suffice it to say the temple was their own as was it likely the passageway with an Aquan passphrase as well. Pressing onward we found a note on a much more recently deceased dwarvish individual stating:

The air down here is so damp and bloody dusty. It seems the tunnels were made by creatures from the depths called the Deep Ones. That explains the puddles in a few of the tunnels. I keep hearing scuttling in the dark… I hope this food smuggling job to Sal Nalore is worth the pay…

A bit further inside we found another corpse of dwarven dimensions and another shred of a journal entry:

This smuggling ring isn’t worth the money anymore! Those drow are ungrateful pricks, and the slaves aren’t good quality anyways. I’m getting out of here before those confounded slivers get me and the last of my merchandise… -Torbin the Baron

Quite soon we were able to confirm those scuttling sounds in the dark were most likely the aforementioned slivers as some horrid, chitinous monstrosities arose out of the water to our left and began their coordinated assault. Dangerous as it was the party was somewhat able to divide and conquer though Gond’s banishment of two of the more dangerous sorts while focused attacks on the rest one at a time allowed us to survive with only some small injuries sustained to the more melee oriented of our number.

During the stomach diving of these various creatures for valuables, Faenoa decided to search the pool either to search their home for more goods or simply to tidy herself up a bit, though knowing her I suppose it to be the former. Thus began a series of pool diving and searching sessions by the gnome and Eight. It did result in some small gains in terms of coin and other valuables as well a two sliver eggs. Faenoa’s came into contact with her warm hands, hatched and presently tried to kill her before being knocked unconscious, the other was left in egg form and cooked to kill the hatchling and provide along with parts of the others to Voromir for his studies. In another pool was found an entire crew of skeletonized elves manacled together in a traditional sort of chain gang with a dwarven skeleton who had the keys to them. At this point we ascertained foodstuffs had been smuggled by this Torbin and others to a drow settlement of Sal Nalore in exchange for elven slaves whether drow or other types it was not clear from the skeletons as the skin color is the only distinguishing factor I have found between them and their brethren.

Pressing onward it wasn’t long before Faenoa detected some Undercommon to the effect of “More food for us, or foes to slay?!” and at her insistence it was neither two cloakers revealed themselves. After a good deal of discussion, a pact of non-hostility was agreed to between those wearing the adventurer’s armband and the colony of cloakers who lived at the furthest northwest and northeast portions of the tunnel system. The two aberrations warned us the unconscious hatchling was likely still providing the Sliver queen with information on our location and intentions and suggested we make an end of the piteous creature. Faenoa was rather reluctant to kill her “baby”, but recognized the import and did the deed presently.

Thanking the cloakers for their word of warning we pressed further into the next section of cavern and were immediately met by the sounds of a furious Sliver Queen urging her brood to end our existence. Fortunately for us, we were more than equal to the task, banishing what appeared to be a healing sort of sliver and pumping the remainder full of mortal wounds in rapid succession.

After some more harvesting of parts for Voromir and the gathering of valuables,  the party emerged on the other side of the tunnel approximately 24 miles from where we started. Indeed, despite our frequent skirmishes the tunnel provides essentially the same benefit as road easing our journey and we made excellent time. After a short rest and preparing to head back to Ruined Oak with our findings, a swarthy pack of drow appeared along with a more half-elven female. The drow unit leader introduced himself as Silvers, while the female called herself Rin, a monk from the Monastery of the Rushing Stream. Further engaging the two in conversation Rin asked if we had come to seek the mythical creature or Ki-Rin slumbering above the Jubjub peaks as she had. As Faenoa responded that we had not, Silvers cocked his head and addressed Eight mentioning it was curious a Rank 3 was allowed to act as the party diplomat. Seeing our confusion Rin explained the Drow of the Briarwall Forest have a sort of caste system for various races as follows:

Perhaps unsurprisingly, only Rank 3 and above are taken seriously when discussing diplomatic issues, however, any race could be taken seriously if they defeat a Drow Elite in combat. Silvers offered this chance to the party and though Valorean no doubt could have easily bested the pompous fellow he elected Eight to give it a go instead. The result was never in question as Eight won nearly a bloodless victory while pasting Silvers quite badly. The Drow did seem a bit flustered it was such a lopsided show, but did seem to revere Eight with a sort of appreciation if not respect.

After further conversations we learned Silvers represented a community called the Moonbrook Alliance that had split from the Lolth worshipers of Sal Nalore and showed us where his settlement was located to the Northeast of the tunnel egress. As always any materials of use please feel free to send, but I am still digesting the matter holistically at the time and have no specifics to ask of the Record Keeping Department currently.