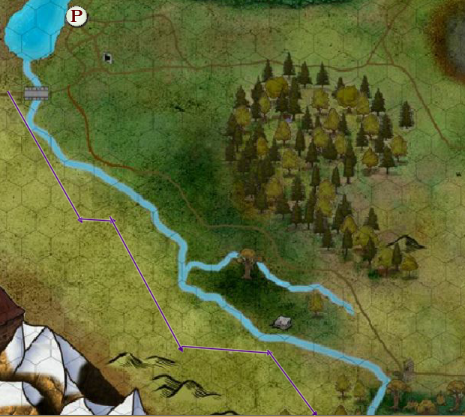 On the clearing of ground to ease transit across the breadth of Katashaka in the face of significant hardship from the bestial to the magical malintentioned in nature resulting in the unfortunate demise of the laborer legion; and other encounters.

Prepared on: The Twenty-Third Day of Hammer in the Year of our Lord 1496

Upon the meeting of strong backs and stronger minds, an accord was reached to begin the treacherous task of roadbuilding toward the long-intended settlement of Honor’s Gate to the south-southeast of White Moon Cove’s now smoking ruins. Given the nature of the task, brave workers under the direction of Foreman Philford were selected on the basis of having either no family or an heir to carry on their line. As the journey began the cloudy weather mirrored the somber thoughts in our collective minds as we steeled ourselves against the trials in the days ahead. Fortunately, nothing accosted us the first day of travel and it was only during the night when all had gathered into Chemist’s magnificent mansion for feasts and festivities that the watchmen keyed in on some points of interest chief among these being a broken wand was with the name Crommwell upon it.

With the roadwork beginning in earnest at the crack of dawn I was able to observe and understand the nature of a magnificent hawk specimen. Not long after birds of a different feather specifically two Dire Perytons and an equal number of Peryton Alphas descended upon the group of exposed workers, but after a time we were able to dispatch the creatures and work continued without loss of life. A small time later a woman and her child out looking for herbs were harried by a ravenous lion, but with even less effort the beast was sent to the grave and after thanking us the pair of humans hurried back toward Ruined Oak. On a lighter note and a warning against relationships of a toxic nature, a note in dwarvish was found and translated as:

Fuck all this shit. I’m out! Fuck you Debra. I’m not putting up with this crap anymore! You may have stolen my heart, but you also stole my kidney! -Billbert

Without any further incident the daily six miles of road were completed and the night passed peacefully.

Not so on the third day however as we neared the Rotmoor River a pair of unlikely creatures (Froghemoth and a Catoblepas) rose from the river and made their hostile intentions known. They were dispatched in short order though Kurl was in a spot of potential trouble before the combined might of Eight and Valorean finished the creature. Ever thoughtful of his druid friend Voromis, Eight harvested parts of the monstrosities and the eye of the catopus was of particular morphological interest to myself as it seemed capable of generating necrotic magic capable of instantly killing a creature. After discovering an abandoned campsite with some attempts made to obscure the type and number of creatures we had some suspicions we were being followed for nefarious purposes.The mood of the group was not improved when a giant eagle envoy of Aquilius as he identified himself informed us wyverns were in the area and to watch ourselves. After thanking the messenger we settled into the mansion and besides some incidentals like a wild magic surge and some empty glass bottles on the ground the night soon passed.

Around noon of the fourth day the rumors of wyverns materialized into very substantive fact as an ancient wyvern with two young wyverns and a young roc attacked and soon came to regret their mistaking us for easy prey.  Not long after a group of elvish speaking pilgrims inquired as to any knowledge we might have of Crommwell the Great Mage formerly of their tribe who had apparently turned to a darker path and was domiciling near Ruined Oak as they were looking for magic artifacts from the fellow. Assuring them we had heard of no such individual our work continued with day and night passing quietly.

With the slow pace of road work I was able to steal away long enough to observe some rarer dinosaur species the mbielu with skin so poisonous it protects them from even the mightiest of predators. While trekking back from this activity I befriended a small flying snake and intend to maintain it as a pet despite the glowering from my constant companion Anhinga. Soon this idyllic engagement of mind and body was shattered as a small earthquake seemed to shake the locale before a massive purple worm burst forth from the ground, swallowing first Os the White then Kurl. After resisting a number of spells from Chemist and myself the monster succumbed and was dispatched shortly with no lasting harm done to either of the ingested entities. Curiously, after examining the worm we identified a brand on it as that of Crommwell’s and our desire to make ourselves acquainted with the mage grew ever sharper. Despite that urge, when on the third watch I spied two dueling mages I decided it was best to let them alone and after some time they shook hands and parted ways.

Continuing my zoological the next day I was able to learn the form of the camel which had eluded me in the past, though I suspect this species being a dromedary made the study easier than the bactrian the time previous. Wrenching me from this observation was a rather seedy human approaching Eight who the good-hearted monk fed then after being left unsatiated and denied further rations turned into a wereboar and attacked. Unsurprisingly only magics could damage the brute, but it was not long before the creature succumbed to our overwhelming force. Later that day, an altogether more chilling encounter was had when we spied a gargoyle statue on a sandstone headstone then a short time later the desiccated bodies of small birds hanging from trees with voices on the wind whispering “Turn back. He is nearby…” During the first watch of the night, I saw what appeared to be Ruined Oak guards running hurriedly away when challenged they mentioned something decimated their party a few hundred feet east from where we spent the night. After thanking them for the information I left them to their own devices. As Moon Sue says, “simulated weakness postulates strength” and I was unwilling to chance a nighttime encounter with whatever had befallen them if in fact they were as they appeared. The following day proved the wisdom of the philosopher strategist.

The seventh day was extremely cloudy with decreasing amounts of sunlight none was visible. At this time what appeared to be a traveling merchant wagon with one lone figure approached. Eight intercepted and during a brief conversation we discovered this to be the vampire Count Brandino who now lived at the former residence of Earl Sitaris. Despite our prior acquaintance with Sitaris, we were willing to give the fellow a chance, but he proved himself a slave to his most base instincts and lacking in the refinement of his better when he made his intentions known to feast upon our laborers. A short battle ensured and with Brandino quickly misted and stored in a bottle until the clouds cleared sunlight could be had we continued our work. A few hours later devils in the forms of ice, erinyes, and behemouth fell upon our workers before being dispatched. Philford sadly informed us reduced worker numbers made it impossible to continue road construction and we spent the night once more in the mansion. It was then I discovered the mist had dispersed from the bottle at some point during the sunless day when the count had doubtless made good his escape and his last words still ring in my ears, “You will rue the day you disobeyed the incredible Count Brandino!”

Now depleted, we struck out early the eighth day as we pushed back to Ruined Oak finding more broken wands of Crommwell on the return journey leading us to wonder if he was the one who perhaps was responsible for all our difficulties and had remained nearby the entire trip. We had completed a goodly 30 miles of road, but fell far short of our goal of over 200 to the east coast. As with everything on the island, greater sacrifice in time and effort is required to complete this project.