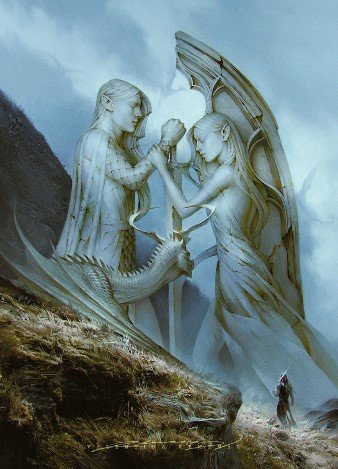 Other members of the party: Rona. Barbarian 2. Fighter 1.

Day 1:
We headed southwest to follow the lights in the sky from the day before. We met Jitterman the Trader. Vivienne traded supplies for gold and a kiss, at the request of the merchant. She consented. It was… a bizarre transaction. He said that there was an unusual looking woman to the southeast that he wondered might be a person of interest. He suggested going southwest at the base of the mountains to search for the mysterious woman.

During the night, a violent woman attacked us during the night, nearly killing me! Thankfully, Murdrum brought me back to life with a goodberry. Never forget a goodberry. She was taken down, but her body disappeared into blue light. There were 8 rings found where the body was. Since I was tired from almost dying, I helped Murdrum with searching rather than searching directly myself. It seems nothing else was left behind. It seems blue powder got sprinkled on Blue by the woman. It came off with dirt. Vivienne tasted it. It tasted like metal to her.

I didn’t keep a great watch due to being tired. I focused on healing myself and cleaning my brass ring.

Day 2:
We met a woman as we headed southwest to look for a shrine of Mystra, according to Vivienne. She said she was a merchant. Vivienne wanted to see her wares then suddenly tried to grapple her, for some reason. In response, she transformed into a form similar to the woman that attacked us last night! She also wore 8 concentric rings. She disappeared before anything else could happen. That was mildly annoying.

We saw 2 orcs driving a sled. They were from the Tort tribe. They said the lady with the rings appeared when the aurora-like lights started forming above the mountains. They said it was some type of omen from the spirits. The spirits were getting restless. They said they were not ready to introduce their village location to other people yet. They saw a figure with a strange marking under the figure’s eye that looked like a tear. They told us to head southwest to arrive at the shrine. The name of the orc that talked to us was Grinder. That made people chuckle, for some reason.

We came upon a mining excavation site of sorts with iron poles. Vivienne confirmed with licking that the powder on the ground was iron as well. It seemed a lot of people in the party this time liked to lick things… There was an iron vein nearby, but I realised that heavy equipment would be needed to mine the iron properly.

Later, we heard the baying of dogs and mooing of cows. We followed the sounds to the see cows getting milked by insect like creatures named Thri-keen. Nearby were large snake monsters and hounds with sharp teeth as well. We fought them to save the cows. The thri-kreen helped in our fight, which suprrised me somewhat. During the battle, Vivienne disappeared, and a man named Captain Rustbucket appeared. Blue went down and got poisoned, but I managed to heal a little. Blue had bad luck today.
The Thri-kreen thanked us telepathically, which I didn’t expect. In return for helping it, it allowed us to take back the meat from a dead cow that we were not able to save.

I found, with Murdrum’s help, snake scales that looked to be of value. I also found a word scratched onto a panel of stone. The word was “Crommwell.” The name seems familiar based on what I have read from logs…

The thri-kreen saw figures that were talking about something. One humanoid figure went to the shrine at the foot of the mountains. The figure had different skin colors and eyes “not of this world.” They didn’t wear much clothing. Other figures were a tabaxi and a red haired woman, which resembled the one woman that disappeared when Vivienne tried grappling her. It later found concentric circles marked on the ground. It said that the temple was ancient and was made when there were dwarves in the mountains. It also saw strange creatures in the mountains that looked like animals and humanoids as well somehow. It thought they were demons or aberrants. The thri-kreen declined going to Ruined Oak due to wanting to feed cows near the mountains. The thri-kreen’s name was Horashio. The kor Rona wanted to continue travelling. so we made camp at another set of ruins.

Vivienne disappeared, and Captain Rustbucket continued travelling with us. During our watch, we saw a giant creature in the night watching us. I continued polishing my brass ring and healed the Captain, despite my questions due to how wounded he was. He told farfetched stories of when he was a boxer.

Day 3:
We arrived at the shrine, where there was a statue of a man, woman, and dragon. The man and woman looked elvish.

We found panthers that looked like guard animals. They attacked. We also saw a werewolf like creature holding a sword that looked like a humanoid and an animal. It smashed a vial around its neck and attacked. The kor Rona threw a panther off a cliff, which was… unexpected. Also, undead looking creatures appeared from the ground. “This creature has pale skin pulled tight over its bones. Its head hangs at an odd angle, unsupported by a broken neck. A rotted noose and many feet of rope hang from its neck and trail behind it. Its lifeless eyes stare unblinking into eternity.” We also fought an animated armor and a humanoid looking owl.

I managed to save Blue again. It’s a good thing I carved that emblem on my shield. The werewolf like creature went down thanks to Captain Rustbucket. The owl creature hooted and shouted that the leader was down and to activate the thing, and it transformed into an owl and flew away. Thankfully, nothing exploded. It seemed that the armor was meant to explode, but Rona and Captain Rustbucket managed to take it down.

Murdrum and I found a magical circle on the ground. Also, the wolf creature had a cylinder on it with dirt inside. The creature had a note saying in Common,

“Protect this, for this is the source!”

The 10 foot magical circle emitted conjuration magic. The dirt was not magical.

10 foot conjuration circle, dirt, and source. These clues came together in my mind to conclude that it could be a teleportation circle. The dirt was not magical, but it could be a necessary material component to get to the place that one wants to teleport towards. I also found Dwarvish runes on the stone ruins. Horace said that they worshipped Mystra. One pillar had markings on it saying “The Forge.”

I buried the bodies of the panthers and other monsters swith Murdrum’s help and gave a short prayer in the name of Azuth. Blue wondered if the teleportation circle getting activated caused the aurora-like lights. The kor Rona stood in the circle and looked haughtier than usual.

We headed to an outpost north. We found another body. I buried it and gave another short prayer.

We arrived at the outpost and rested, getting food and water from the bachelor guards. The kor Rona warned them not to touch drawings of 8 concentric circles on the ground.

We rested at the outpost then headed back to town. The journey back was tranquil. We couldn’t figure out where the lights were coming from exactly, but perhaps they were related to the teleportation circle like Blue mentioned…