Beware the mountains north of Jubjub

Beware the mountains north of Jubjub

I’ve recently arrived in this land, safely, thank Sune, and was set to embark upon my first adventure.  I met up with my party: Xell, Kavor, Theris, Sixer, and Sender. I was at first wary of the goblin and kobold, and though they are ugly, I ever endeavor to seek the inner beauty as my goddess desires.  It was decided that Sender would blaze the trail and Kavor would be our scout, with Xell reluctantly serving as our leader.  We were supposed to go search for gnolls to the east of the mines of the Jubjub dwarves (a stranger dwarven name I have never heard).  Xell had heard the gnolls were headed north and proposed we cut through the mountains to reach them.  This would prove to be a dubious idea.

We set off to the north and all went well for a while, but we were ambushed by a pair of some sort of blood ooze creatures after being distracted by an illusion of a goblin kicking rocks down at us.  One of our number went down to one of the oozes, and I was encapsulated by the other, only remaining standing by the grace of Sune.  I held my ground long enough for my allies to slay the other one, and together we vanquished the second beast.  Everyone had survived our first encounter.

Soon after, we camped for the night, a night which passed blessedly uneventfully.  I had a short chat with Kavor on our watch, he seems a bit rough around the edges, but someone I could get along with.  The next day we pushed deeper into the mountains, eventually coming upon a shimmering barrier.  Sender poked his staff through it and it dissipated, revealing another of the bloody ooze creatures and a horrifying monstrosity of blood and bone the size of a giant. 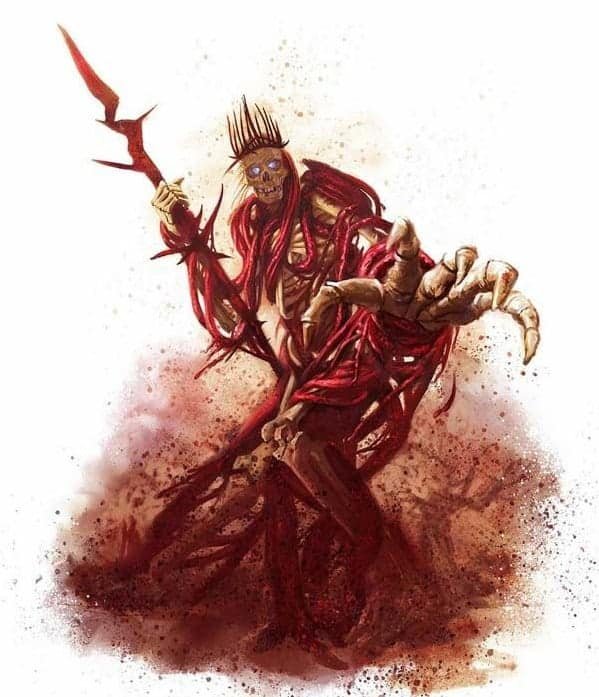 The battle that ensued should have seen all of dead.  It began with a boulder thrown by the giant crashing into Sender, and Theris being engulfed by the ooze.  Spells were thrown, arrows loosed, and swords flashed, and eventually we slew the ooze.  The giant however, wasn’t done with us.  It summoned a spike of frozen blood upon Sixer, Sender, and Xell, knocking all but Sixer unconcious.  Theris was also gravely wounded, and the situation looked increasingly grim.  Sixer, however, proved to be our savior.  With his “science” magic, he repeatedly healed us, keep us alive through the onslaught as Theris and myself parried blow after blow from the thing.  Eventually the onslaught of lightning from Theris and Sixer, Sender’s magic, and arrows from Xell and Kavor felled the monstrosity. We felt safe for only a moment as the dolorous sound of a horn blew through the mountain pass.  We knew this path would lead not to the other side of the mountains, only to death, and we returned the way we came.

Somehow this encounter was only the second most terrifying thing we saw on our excursion.  As we traveled down the mountain we came upon a magnificent but terrifying battle taking place as a dragon unleashed a torrent of lightning upon some sort of giant bird, perhaps an eagle.  The eagle flew overhead and escaped as we scrambled to hide from the draconean terror, and luckily it didn’t seem to notice us.  Our next camp proved strange as an unknown magic caused several of our party to hear screeching noises and feel strange sensations, and caused Sixer’s “science” magic to misfire.  A pair of pants were soiled, but the phenomena passed, as did the rest of the night.

Eventually we returned to Jubjub, having learned that the mountains hold death and absolutely no shortcuts.

Go in the light and love of Sune, but not north of Jubjub.