A Pain in the Sess’Innek

A scroll is placed onto the pile of logs, with a small label attached.

“An account of our adventure to clear the temple of Sess’Innek, located in the swamps to the south of White Moon Cove.”

Journey Through the Swamp

Our travel through the swamp toward the temple was rather quiet, all things considered. This was likely due, in part, to Theila’s skill at navigation. It began to rain on our first day, continuing til just after midday.

The first night, Hanna was taking her watch when a gaggle of merchants passed by. She attempted to negotiate with them, but without funds they were uninterested in idle chit-chat. The group continued on their travels and we continued our rest.

Our second day, toward the evening, we came across a pack of sleeping hyenas. Though Dwaff tried to study them, he quickly found them to be dead. Some sort of gas bubbling up from the swamp water appeared to have poisoned them.

Hanna attempted to get a closer look using her torch, and proceeded to cause an immense explosion. I was very nearly reduced to ashes by the blast, but thankfully the rest managed to escape mostly unscathed.

We rested for the night without incident, and found our ways to a rundown shack of sorts close to where the temple was reported to be.

Within the dilapidated shack, we found a gentleman by the name of “Scabby”. Supposedly, this man was someone that had assisted the adventurers of White Moon Cove in the past. He was absolutely disgusting, but quite friendly.

He welcomed us into his home and offered food, if roasted bugs can be called food. Dwaff drank some of his homemade alcoholic concoction and promptly fell asleep.

Upon inquiry, he explained to us that the area around the Temple of Sess’Innek was unusually quiet. We deduced that something must have moved into the temple after the clergy had been slain, or perhaps whatever they had been guarding had escaped.

At that point, we decided to retire to my magical Hut and rest through the night.

In the morning, Scabby fed us rather tasty waffles and sent us on our way. If any of the party (or all of us) turn up dead, they were likely poisoned or disease-ridden in some way.

Entering the Temple of Sess'Innek

We ventured into the temple, taking care to check for traps along the way.

In the entry stairwell, we found a lizardfolk that looked as though it had perished while trying to escape. The mortal wounds suggested that it had been felled by some sort of vampiric entity.

Having some knowledge of folktales regarding vampires, we set about creating stakes to assist in slaying the undead creatures and continued into the temple.

Led by Dwaff, who had entered the temple previously, we made our way to an altar with a mural behind it. It concealed two doors, which led into a secret area of the temple. This secret area contained a ghastly sight: a dead lizard folk, encased by rusted golden chains. It appeared to be some sort of seal for the trap door beneath it, which had been broken open.

The mural, along with the guidance of our gnomish cleric, suggested that whatever evil we had come to slay was beneath that trapdoor. Knowing this, we descended further into the depths.

With Hanna in the lead, we began to descend the steps. Very quickly it became apparent that this area was more treacherous than the last, as the stairs became a ramp and both Hanna & Zak were flung into a flaming pit below. Only my quick thinking and use of Feather Fall magics saved them from the long fall.

Thanks to Hanna’s fast hands and climbing skill, the two were able to escape quite quickly. The trap was disabled, and we continued on.

We entered a darkened area, a large open space with a river through the middle. Ang and Hanna’s familiar scouted ahead, reporting three burial mounds on the other side of the water.

I used magics to fix Zak’s inferior sight and we approached the river ahead of us, quickly discovering it to be an illusion. Beneath the illusion was a pit filled with acid, the second trap we had encountered. Through Dwaff’s magics, we managed to descend into the pit and begin to cross the chasm.

On the other side, we found that the two smaller burial mounds had once been chained, and appeared to be broken open in the same manner as the trapdoor above. Within the mounds, several stone sarcophogi had their lids pushed aside. Lizardfolk footprints led out from them, toward the largest of the mounds. We quickly deduced that it was likely the location of the vampires, and decided to enter.

Upon opening the set of large doors, we were greeted by a nasty sight. Two vampiric priestesses and their large, brutish guards were performing some sort of ritual to summon something from a massive, ornate coffin at the far end of the room.

A brutal combat ensued, with Zak taking the brunt of the hits and even becoming charmed by one of the priestesses at one point. Theila was able to break the concentration of the priestess casting the summoning spell, and I was able to Enlarge Ronda so that she might, as they say, “go to town”.

We were triumphant, in the end, and used our makeshift stakes alongside my Fire Bolt magics to slay the vampires permanently.

Investigating the large coffin, we found a slumbering brute of a vampire clutching a shattered sword. We retrieved the sword, and over the course of a rest I was able to attune to it. Its a rather interesting magical blade, able to summon a coating of acid to make it far more effective.

I claimed it, for now, and shall test its capabilities the next time I venture forth from the towns.

Once we had identified the sword hilt, we left the temple and began the travel back to our town.

We passed by Scabby’s hut once more, informing him of our efforts in clearing the temple of its horrific denizens. He thanked us and offered “shots”, but we declined in hopes of avoiding another night of Dwaff smelling of garlic.

Our return to the town was incredibly uneventful, and we parted ways shortly after.

The next line is written in flowing Celestial script.

I should prepare something to deal with aqueous obstacles, next time. There are far too many of those around. 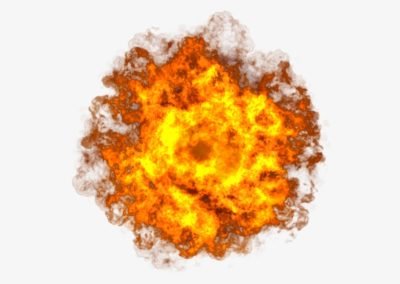 Recreation of the Fireball 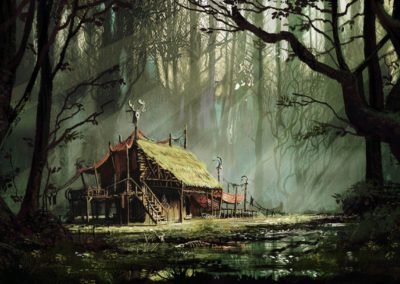 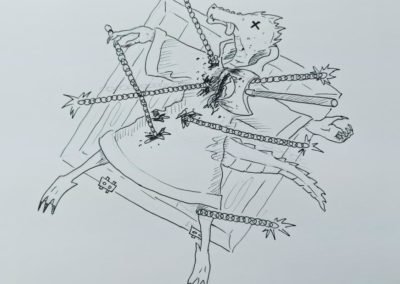 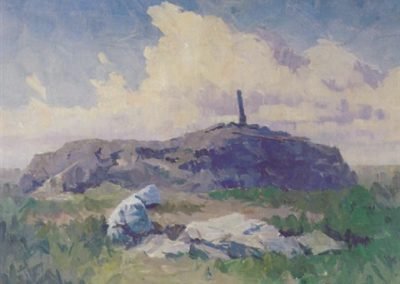 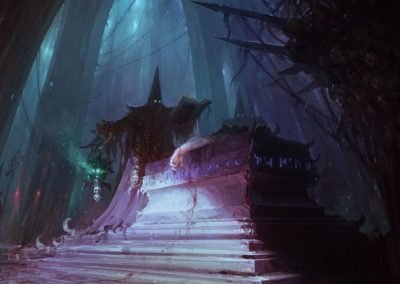