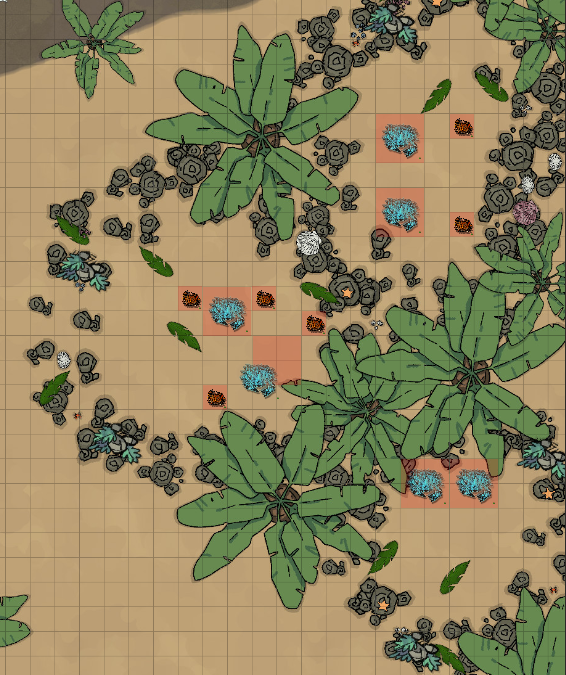 On the aid rendered bucolic laborers in clearance of beachfront acreage for use in horticultural endeavors resulting in a close encounter of a crustacean construct kind mitigated by the bewildering arrival of their heretofore anonymous creator leading to restitution in the form of item retrieval with inclusive vengeance upon strigiformes harpyia; and other encounters.

Hearing of a cry for help from the Port Mirandia Farmers’ Union, a group of us called upon Stu Mickles to to investigate and resolve the situation. Listening to the fellow it seemed a crustacean infestation on seaward facing was causing no end of difficulties in readying the plots for agricultural purposes. Following the directions to the area in question, we were able to identify the larger creatures as Giant Crab Exoskeletons suggesting they might be constructs of some strange sort. After failed attempts by Saoch to converse with the decapods we set about cleansing them from the beachhead.

They proved somewhat dangerous with a lightning breath weapon of sorts, but we managed to nearly finish them off before a wizened old wizardly type of fellow named Rastuga happened along lamenting the substantial losses his prized creations had undergone. Peerless leader Abel, in an effort to make reparations, offered to assist the wizard in a mission to recover a particular chest of his from some strigiformes harpyia, colloquially known as Owl Harpies.

After informing Union Representative Mickles the beach was now safe and convincing Rastuga to show us where he was domiciled, which turned out to be a dilapidated wooden cottage, we set out to confront the thieves with haste. Passing within sight of the water we utilized the party familiars to scout and they soon spotted harpy-like forms on a jutting outcropping of rock. After another attempted attempt at diplomacy died stillborn on Saoch’s lips the skirmish began in earnest and only after some difficulty caused to the party and poor Faenoa in particular we were able to silence the monstrosities. Casting about the carnage of battle and a nearby wrecked vessel unceremoniously entitled the Spellrammer we uncovered both useful magic items and the missing chest of Rastuga. I was greatly tempted to peer into this chest, but refrained at the disapproval of Abel.

Finding our way back to Rastuga’s after a swarm of bats briefly gave us a swarming, I took the liberty of listening in on the wizard’s thoughts during a very brief conversation while handing over the chest and was able to discern a few items of interest. Firstly, Rastuga seems to have been romantically rejected by one or more of these harpies and perhaps explains his loathing of them besides the theft of his property. Secondly, the box contained a bundle of papers. Lastly and most importantly to some, the mad tinkerer seemed to harbor no ill-will towards Port Mirandia or the AFK in general. Putting the first and second of these together, I postulate perhaps the chest contained love letters from Rastuga to the harpies or something of a related nature and they were possibly blackmailing him or just mercilessly mocking him for them. As Moonsue says, “All is fair in love and war so rue the day the twain should meet.” Never was this proved moreso than on this most recent adventure.