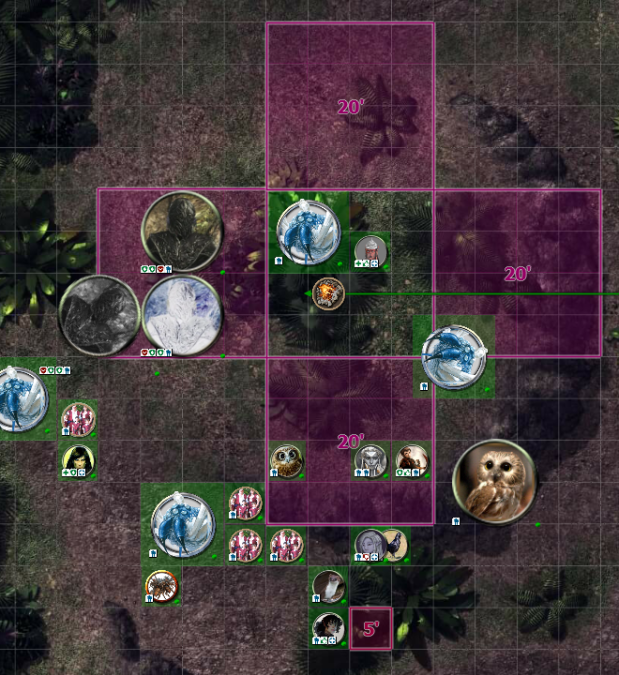 On the evacuation of humanoid personnel safeguarded by arachnoids to faraway territory leading to cognizance of various cross-species naturism behavior culminating in discernment of clandestine adversaries with all subsequent hostiles skirmished into oblivion; and other encounters.

Prepared on: The Seventh Day of Uktar in the Year of our Lord 1495

After it was determined the populace of White Moon Cove should be evacuated in the face of impending siege, a group of us were tasked with shepherding the civilians to the comparative safety of Ruined Oak for the time being. Complicating or aiding in the matter, we were also escorting Darcy’s spiders and spiderfolk to their new domicile in the mines of Ruined Oak away from the flames of war.

Early on into the day a male human in the nude invited us to stop and participate in calisthenics with him. After politely declining we were not troubled any further until stopping for the night when foragers had a run-in with a beautiful singing woman completely nude in the freezing waters of a nearby pond. Once confronted, she hissed in a very inhuman manner and disappeared not to be seen again. Not but a watch later a small winged fey creature flew about the encampment setting off the alarms Tenfoll’at so enjoys crafting begging us to “Come play”. Some of our number felt compelled to join in playing with the creature, but soon it too disappeared without a trace.

Not to be outdone, during the third watch Quil found cause to cast a Detect Magic spell to identify what we later found to be manacles, but also unmasked a group of gnolls disguised by what I imagine was a Seeming spell to appear as farmers who had been traveling with us since White Moon Cove. Besides a couple of gnoll swarm detachments, a portly farmer proved to be a Gnoll Death Knight and his farmer’s wife a Gnoll Death Mage. Thanks to this fortunate exposure we lost, but two civilians to these gnolls in human clothing. Despite a brief interrogation of the mage, we learned nothing of importance except there were more potential ambushes lying in wait upon our path.

Striking out the next morning, we came upon an older gentleman in plain robes sitting on a flying broom reading a book. The fellow’s name was Tim Willard III, while the book it seems was something labeled Fables of Myth and Legend and the particular story being read was discussing the petrifying gaze of a medusa. No sooner did we glean this information than we pressed onwards after he declined the safety our numbers may provide.

Not a few miles further one just past a stone pillar, we met that ambush consisting of various gnolls types and some winged kobolds in support. The spiderfolk’s distinctly more arachnid bodyguards did an admirable job walling off the innocents as our party dispatched the curspawn and their companions with little difficulty.

Continuing on we parted ways from the arachnids at the mines after seeing some dried fish in the road along with a fork and cup. For some reason at this point the name Lithandar Altar comes to mind, but for the life of me I cannot recall to what end. If you could run a quick search of the Record Keeping Department I would be most appreciative.