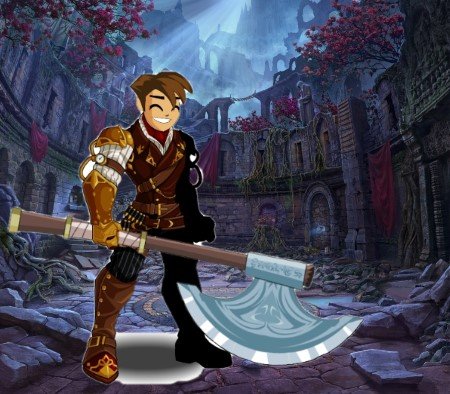 Hello Everyone, Artix von Krieger again. This is the log about the other trip I made recently, the first being to Trader’s Bay, this one being a trip to expand the lands we know about to the north of the Jub Jubs. For the most part, it was a relatively pleasant trip as we kept going at break neck speeds to the river north of the mountains. The first night did involve a fight with a pack of incredibly dangerous Owlbears, one of whom was very metallic.

After that first night/fight we set back out to go North and headed towards the river. When we got there we found a large bridge crossing over it that had banners with a symbol of Four Mountains being split in half by a lightning bolt.

After we crossed that bridge we rested for the night up by the coast, due west of Xanaphia’s Tower by about two days travel, where the coast begins to go Northwards. Peppington and Gronk decided to go fishing and had piled up a lot of fish by means of the water elemental Oreopan before we went to sleep. During the early part of the night I saw a man who a fair distance away bathed in light as if by the Light Cantrip. He slowly got closer to our camp during my own watch but was focused on observing the sea so I left him to it. I informed Peppington of his presence as my watch ended and he decided to throw a fish to the man (who was still hundreds of feet away from us) as a show that he is a strong hunter.

The man saw this as an invitation to have a meal with us so Peppington walk up the entire group and tried to hide inside of Daimyo’s floof. When we introduced ourselves he said he was just an old man so Gronk named him Mr. Justanoldman. Ragna went for the standard paladin reaction of seeing if the man was an undead or a fiend through holy magic sight and discovered neither, he was instead a celestial and saw such an act as a sign of disrespect. However, the situation quickly returned to a serene state with two canaries coming out of his beard to play with Peppington and Daimyo respectively while Ragna talked to him about past mistakes and redemption. After the discussion and the fish he ate had been finished he left to go back to his observations of whatever he came across.

From there we ventured along the coast for another day which eventually took us to a creepy dark dilapidated forest where all of the trees were covered in massive spider webs. We stayed outside of it as we slept but much like with the owlbears we were set upon in the night. As the nature of the forest we were outside of foreshadowed, the aggressors were giant spiders; only these were massive invisible spiders that could attack unseen.

While whatever ability made them invisible was active they took less wounds from our weapons, but despite this secondary advantage the primary aspect was defeated by Gronk’s lantern. We made quick work of them and went back to sleep after deciding to search for their past victims in the morning. It didn’t take long for us to find an incredible amount of web balls and clumps large enough to hold people high up in the trees so we set to work opening some with the intention of burying the dead and saving the living. It….. didn’t go exactly to plan at first, with Gronk, Ragna, and Horsie getting terribly burned by acid (but healed with magic safely) from within the first clump. This led me to throw some magical minute meteors up at them from a distance to drain out the acid. However, though this tactic was effective it quickly angered whatever ruled this nest so we booked it with great speed.