I Spied a Spider 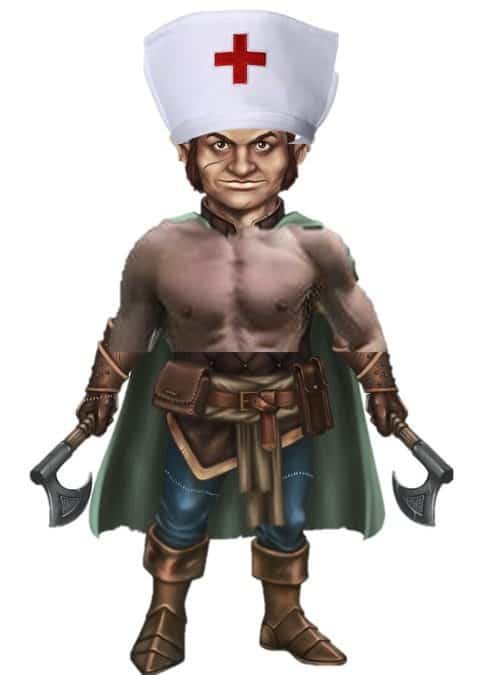 Well all seemed well at the Black Foot Pad Inn, this dwarf was buying us drink and all and talking about how we could make a good bit of coin doing odd jobs for him. The dwarf, who’s name was Yarbsy, kept going on about this sweet new home he had and was really thankful to the White Moon Cove party that helped him secure it.

Well Black was doing the negotiations and I think it was going well, as Black kept giving the thumbs up. It was as the negotiations were ending, and I was about to dig into all the free food, that a big commotion was heard outside. Well we went out there, Me with my Sword drawn and torch in hand as it was becoming night. What did we see you wonder, well it was a humanoid eating somebody else in the back yard. Well it didn’t stick around to answer questions and took off towards the woods. We gave chase and a mob of inn folk started to follow us. Fortunately some of the party members talked the inn folk into returning and waiting for us to return.

We got a few pop shots off on the fleeing creature but he was fast and soon we found ourselves deep into Neathy Woods. That is were suddenly a group of Baby Spiders came out of the wood work and tried to spit poison on us. I managed to avoid many of their blows until one got me in the eyes with something. The team did a great job of blasting them down so we continued our hunt.

We soon found a spot with a bunch of webbed holes in the ground and while we were searching a big o’ hunking spider came at us. It was able to turn itself invisible like, but some one in the party was able to sense them, I think it was hooter, as that crazy owl brushed across it. Well the spider did not stay invisible long and it started to try to eat party members. Well I wasn’t having any of that so I went up to and bashed it unconscious.

Well the spider still had fight in it as soon got up and started to scurry to a better position. I followed and landed another attack. Then the spider turned on me and failed me real good.

I was knocked prone, but my team mate stepped and splatted this bug. Afterwards we took a short rest and then continued tracking the fleeing humanoid .

We track the dude to a cave, and just walked up in their like we owned the place. Thinking back some prepping and trap laying would have been a good Idea. This became more apparent when we spotted the guy again in the back of the Cave. He was very huge and definitely much bigger than from before. He got all angry like, and I tried to talk with him, but he was not having it and began to attack but Daffodil got a shot at him but it missed. That’s when he put up a big ole ball of darkness. This really messed up all the others as they be mostly ranged folk. I think Alyx got a bead on him from a higher perch but missed. The dude then shrunk a little and went invisible. He hit Sammal with a glave as Sammal was trying to backup. Then he used a cone of cold on us, this dropped Sammal and Daffodill right away.

I moved back at this point as I noticed the dudes wounds closing up faster than we could make them. I used what I could and stopped Sammal’s bleeding, then dragged him away from the dude and closer to Daffidill.. I manage to get her wounds closed as well but they were still both unconscious. At this point I thought we were all gonna die, and then the dude made a break for it, but not before taking Kleon down. Kleon had been buffing me with some magical field this whole time and I felt it leave as soon as he hit the floor.

Alyn took a shot or two at it before it finally left, but its still out there so beware. We rest the rest of the night there in the cave and luckily nothing else showed up. Then we headed back to the Black Foot Pad Inn with a tale to tell.