Lionel, the greatest bard that ever graced the greats! 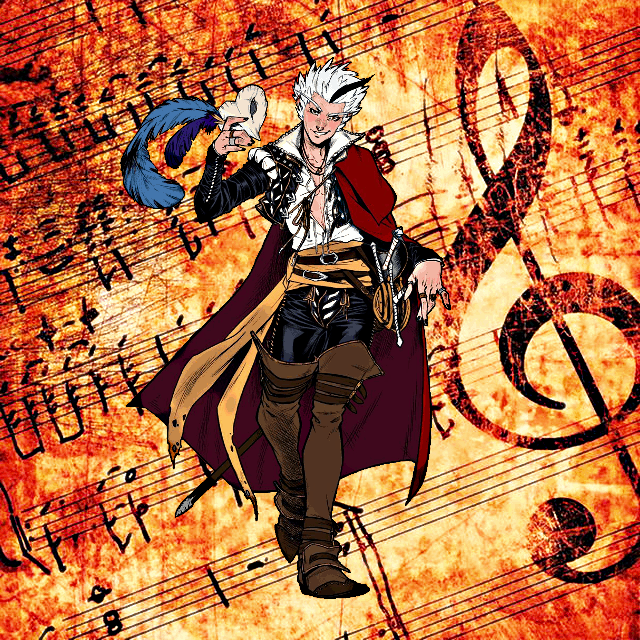 Oh my devil, dear reader… My heart is broken. I’ve written before about that annoyingly overconfident and nice musician Lionel. He died trying to save us all. It’s so hard to write this through the tears. He was my only rival here, and now he’s gone. People can blame each other but in the end, we are all responsible for our own actions. Arguing and fighting doesn’t stop the dead from being dead.

I walked into this being thrust the leadership position and I was excited. 11 under my charge, I was sure everything was going to run smooth… it obviously did not.

As we started off we heard some noise in the bushes. To give everyone a laugh I yelled for our team Bravo (sneaky team) to investigate the bushes next to us. They recovered a handkerchief with a red embroidered R on it. I still have no idea what this was for.

So no sooner did we leave the jub jubs we ran across a typical highwayman ambush. Four men across a small frozen stream. An obvious ambush. I told the people to stay where they were and a couple of the men followed with me. I raised my arms to show I wasn’t going to act hostile as I approached. Lionel crept through the trees on the side. Both of us could smell the ambush. We knew there were others hiding.

We were told to halt, so I stopped us. As I began to open my mouth to begin my negotiation I heard someone yelling to them from behind me.
Threatening and talking over me was this noble fop who has probably never seen a battle before. I was stunned, dear reader. The audacity. As the negotiations went south this blue blood then calls the rest of the party over putting us all into one nice grouping. My jaw hit the floor.

Then this ivory tower, out of tune hack gave me an order to shoot a warning shot. Like seriously… this totes happened.

As you can guess dear reader, it went bad…

A fireball hit almost the entire party. Three people dropped immediately. Luckily by sheer will of force and cunning of the others, we were able to shortly get everyone on their feet and fighting. GreGory and Fiver chased down the mage while the rest of us healed each other and struck down the front line save one. A lone archer took pop shots at us but eventually faded away with the mage.

We began interrogating the one that was left alive. We found out the bandits had pressed some locals into service by the threat of death. The survivor only knew their base camp was to the southeast meanwhile our quest lied to the northeast. He did not know the name of the mage, but the archer was named cutter and had a tattoo of a lightning bolt.

The party voted to go after the bandits. We followed the tracks of the mage, it had obscured its tracks and left us a badly worded note. The note basically called them the rabbits and encouraged us to chase them as they stalked us. Finding a dead end and seeing as they were gonna hunt us down we decided to start walking towards the ruins. Just before dusk, we found the monestary we had been chased out of many moons ago. After some quick decisions, we decided to camp before heading in.

The night went by basically uneventful and we approached the keep in the morning. As our small army got in front of the main doorway, the stoic Lionel and the nice creepy guy GreGory checked the windows along the perimeter. Once they returned I proceeded to kick open the door.

Note to self… check to see if the door opens outward before kicking it.

With wounded pride, I pulled the door open and entered. The silent kneeling statues were still here along with the altar and four looming cloaked statues. The only thing that stood out was the altar now had an obelisk jutting out from its center. We filled in with me and Manek walking up to the altar to check it out.

I’d be so much more excited about this part if it wasn’t for lionels death that came much later on. But the obelisk opened its eye and maw and produced four tentacles. Of all the creations of uncle Demogorgon, I’d have to say the roper is by far my favorite. The roper grabbed Manek and I and begun its lashing out. As everyone fought hard, our ranged team behind us was dealing with white fire lizards following from the walkway above us. Fighting tooth and nail we slew the roper releasing Manek and me.

I quickly worked my way by, inspiring Freyja and Grandma Babushka with heroism, when suddenly grandma smacked me in the face with her great sword. That old lady can really hit hard and it made me lose concentration. After they slow the lizards she felt bad about it, and remembering my own grandmother I began crying because I knew cookies would be involved. Once I was promised cookies I dropped the tear routine and smiled.

We began searching the upper levels and found no traces of my Groady Goat-Headed Cousins or the massive swarm of flies. I pointed out the two stairways that went down and asked if we all wanted to file down one or take both. The party decided to split and I probably should have said something but didn’t because I do have that love for a bit of chaos.

I will never, ever bring up an idea like that again. It was dumb. I knew it was dumb and I shouldn’t have pressed my luck. Sure they could have ended up in the same spot. But they didn’t and it cost us poor lionel. I went with the split, Lionel led the second group down along with GreGory, Fiver, Babushka, and Grimlock. The last thing I told lionel was I would lead Team Awesome and he would Lead Team Not Awesome. He laughed it off in typical Lionel fashion and we both made our descent.

I went with Osric, Rhoshar, Tehran, Arkady, Freyja, Manek down the left-handed path which is always my favorite. We peaked around the books and crannies when I walked straight into a very upset gnoll. The sounds in the narrow hall were filled with steel and my blood as the gnoll fought us. With a swift strike, everything went black.

I awoke on the ground and saw my party attacking a floating head along another corridor. With the sound of buzzing coming from the way I came. I used my last bit of magic to heal my self and began throwing my magical insults in desperation.

As the battle finished I heard GreGory’s voice say “through here comrades.” We ran through the open doorway into a large room when my heart sank. Bled out on the far side was Lionel next to a very distraught Babushka who was in a mortal battle with a very large naga. I cried out to babushka giving the last of my inspiration to her. I cried “do it for him!” The tears already flowing down my face.

We were suddenly covered in sickening darkness. I heard everyone yelling and running around me when suddenly the darkness lifted. Everyone had swarmed over the naga. I saw a brief moment of clarity and furious anger flow over Babushka as she lifted her great sword high and slamming it into the creature nearly killing it. With a final stab by another, the naga fell.

I ran as quickly as my legs would carry me and hugged babushka from behind. While this was my first journey with her I already knew her from the stories lionel would tell. She held his head in her lap so lovingly and stunned. I held on to her crying with her. Lionel was annoyingly arrogant sometimes… but he was true of heart, loyal, kind, sweet, uplifting and the best companion one could hope for. He fought and loved everyone like an angel and the world is so much darker without him.

At that point, people began arguing and throwing blame. I followed GreGory out of the area to keep from stabbing the fop. GreGory, Grimlock and I searched for things of value to try a d raise back our friend. After turning a corner GreGory discovered a cactus-like creature in a bucket. Protecting 5 orbs.

I later learned that these were 5 of the 7 orbs left by the Rashemen that the archivist needed to find the locked temple which will allow us to reseal the primordial Gorgontillian. Alexandar’s orb of night and Tsaran’s jaded orb are still lost to us. The Cactus bucket referred to its self as Thorny the Ruin of Tsaran. It led us to some treasure but not nearly enough to bring our friend back.

Our morale was broken, we took Lionel’s body and our selves back to the Jub Jubs. Babushka was silent for the rest of the journey. It was like the light had been taken from her eyes.

So I title this in the hope it will remind everyone the Lionel was here… He was important, and he was the greatest bard that ever graced the greats!

🎶His hair was white as snow,
🎶 And his heart beat would fill a room with glow.
🎶Our dear friend Lionel was the greatest we will know.

🎶He laughed at danger as soared through the sky.
🎶His lyre was on fire, and would make monsters cry.
🎶Dash through trouble like a piece of babushkas pie!

🎶Our soaring angel knew no fear,
🎶Kept our mugs filled with beer,
🎶And when every you heard him you’d let out a cheer!

🎶Oh Lionel we still feel you right by our side.
🎶We wish you good journey on your final ride.
🎶 Your light frees us from the darkness that hides.

🎶No pain can come for you in these dire straights,
🎶 Your work will help change our darkening fate.
🎶 the greatest bard that ever graced the greats.