We met with the curator and he gathered us some items we might need for our mission. Six orbs The seventh orb Zak had possion of. 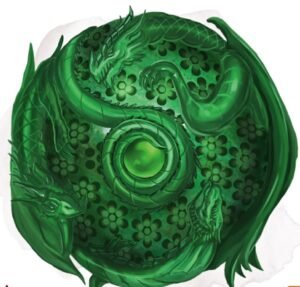 And a star chart Heading south to the outpost nothing of importance really happened as we made great time in Val’s carriage pulled by both Umbra and Zephyr. We spent the night at the outpost to not push ourselves even though the objective was so close. We woke up the next morning and headed west to the mines. Upon arrival we noticed two bodies at the entrance and on closer inspection these were two Khenra bodies with missing PIMs and acid wounds on their bodies. We made plans to return them to the HoH Embassy after we finished.

We entered… it had been a while since I had been to this place, but I recalled the friendly mice who gave us information last time I was here. They again were helpful and told us that both the Khenra and Mindlfayers were here and they fought. This was what we expected happened but being sure is always good. We made our way through the mine waiting to find something and as we were about to reach the gates sealing Loctim we found a “thing” 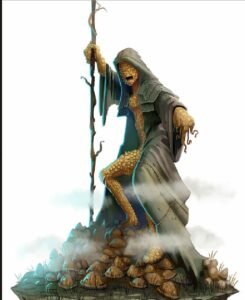 We advanced on it and found two more of them. The one advanced on Ogis and spew acid on him. Nasty things and for sure what fought with the Khenra. Ildan smited on and it quickly fell and the other two quickly followed, but a crack of lightning sent two excuse me one of our party members down as is shot through Zak, Ildan and Ogis. Both Ildan and Ogis fell but by sheer willpower he stood back up as we saw the invisible enemy for the first time… Snowball covered distance… like Snowball does and stood toe to toe with the Illithid. Ogis, Val, and Ildan attacked at range, but it managed to latch onto Snowball’s head… I rushed forward and unleaded a Guiding Bolt out of desperation. It connected and the creature fell limp sliding down Snowball’s body. With noone else in sight we moved towards the gate and noticed it was still locked. We searched the bodies and found what looked to be an explosive device and since we had no way to pick the lock ourselves we decided to let Snowball light it and run as the rest of us were farther away…Snowball being the fastest and all. The gates locking mechanism broke as the portcullis rose and we stood before a gian door barred from our side?

We removed the bar over the door and Ildan and Ogis pulled them back. The air was what you would expect from an agless tomb. Scattered about where Dwarven skeletons and in front of us a pond of water. As we approached the water we must have angered the spirits resting here because it got a bit crazy. First from the sides came the Specters. 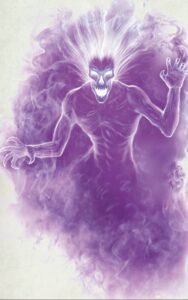 Six of them in total followed by a creature with a scary aura. Val and Snowball charged this one and it fell under a mighty blow. But just as this happened Val was ripped off of Zephyr and taken out of my sight for a short while by a Cave Fisher. 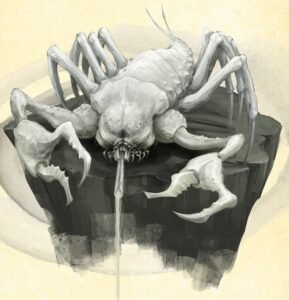 Ogis brought forth the spirits of his past as they spiraled around him as him Zak and Ildan were surrounded by Specters. I gave Osiris’ Blessing to everyone I could as Snowball gave chase to help Val. We started to make a dent in the specters as Val and Snowball killed the Cave Fisher. When suddenly an arrow ricocheted off Ildan’s breastplate. In the distance was a rather large Dwarf… a dead but moving rather large Dwarf. We turned our attention to this being as the rest of the specter’s were taken care of. Ildan was preparing to use his might on this being when another web shoot out and pulled him and his Moon-touch rapier across the cave. Val took aim and scorched the second cave fisher with his firebolt and Ildan quickly returned to fight. This creature was strong and was able to ignore some of what we threw at it. Eventually Ildan’s rapier found it’s mark and the creatures spirit left is disheveled body and eerie sound rang through the cave “Finally FREEEEDOM”

We decided before going any further we would risk taking a rest inside the mine. We shut and rebarred the doors before we took our rest. Ildan and Val took last watch to give us the benfit of their powers. We set off through to doors again and further down the cave.  As we made our way down we saw a faint green light. This is about the time when thing got interesting. As we entered the green hue of light we felt all magic fade and were not able to even cast our spells while inside of it. The light even dismissed Zephyr, Val’s summoned steed. This was very troubling as we began to attack the giant creature who seemed to remain on is pillar in this light. Ogis decided it would be best to explore elsewhere since magic was not working here and he found a red hued light. Snowball ran north and found a purple hued light. As we attack this creature and made little headway into bringing it down. Val tactically retreated outside to his carriage.  It was at this time Ogis got teleported away and out of sight. Snowball was still searching around and Zak went in search of Ogis. I stayed by the door with Ildan to ensure our friends could make it out. Ogis found a yellow hued light next and realized as he walked through the lights if we ignored the creatures they left us alone. Ogis found the purple hue and he explored it and found a door with seven orb sized slots. 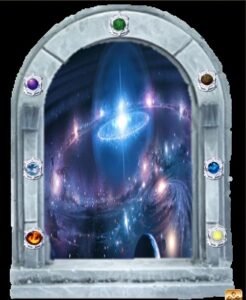 With the help of the star map we found the correct slot for each orb. There was also two buttons and some writing on the wall. Ogis pushed the button that was not depressed in and the other popped out and the lights and sounds of alarm ceased. We heard Zephyr make some noise in the distance as he headed towards his master. The writing on the wall was covered in in some grime and dirt but what we could see was LOCITUM with spaces covered by the grime. We cleaned it up and we saw this.

So our assumptions were correct the Maintenance Site 004 and Locitum were connected… in fact there were the same thing. We put the last orb in place and the doorway opened looking like a night sky. Ogis and Snowball walked right in…

They yelled back to the three of us and that was ok and we all moved into the area together. It was surreal like I was walking through the sky but not at the same time. Ogis found a religious room dedicated to Ho Amon and Snowball could not resist taking a crown from this room.  Ildan and Zak found a small metal box that contained a scroll (Later identified to be a lost scroll of Blade Song). As we moved forward a ladder was going up. We climbed into what looked like a control room. It had advanced technology like the 0017 pillar. Zak tapped his helmet and began to decipher the text on the screen.

Also as we thought there is more than one pillar or structure this site is…er was connected to. The third message read:

We also can safely make assumptions that these “Council” or Illithid devices caused some of the dissasters around the island. The final message we saw read:

Not sure what we could conclude from that message but apparently there might be more than just skyships in the sky. We found some uniforms and a suit of scalemail (later identified as Mitheral Scale Mail Armor of the Locitum). Ogis also found more buttons as I looked for info on Pillar 0017. He pushed the Red  then the Green one as Zak saw one more message on the screen.

Zak yelled for us to run as we grabbed the stuff we could and ran for the doorway. An alarm was sounding again as the timer kept counting down. We felt the ground shaking and we only stopped to pry the orbs from the doorway. Once they were out we sprinted to the caves and back to meet up with Val. From behind us we heard a loud boom as the earth shook but the front of the mine remained standing.

We loaded the carriage quickly and hitched both steeds. We set off at a blistering pace stopping only fora few minutes at the outpost to inform them of what happened. The earth was still shaking all the way over here. We wasted no time and pushed our way speedily to White Moon Cove.  Upon arrival the party made their farewells and Zak, Snowball and myself made our way to the portal with the Khenra bodies and PIM necklaces to bring them to Onnuphi so they can have their proper death rites handled.