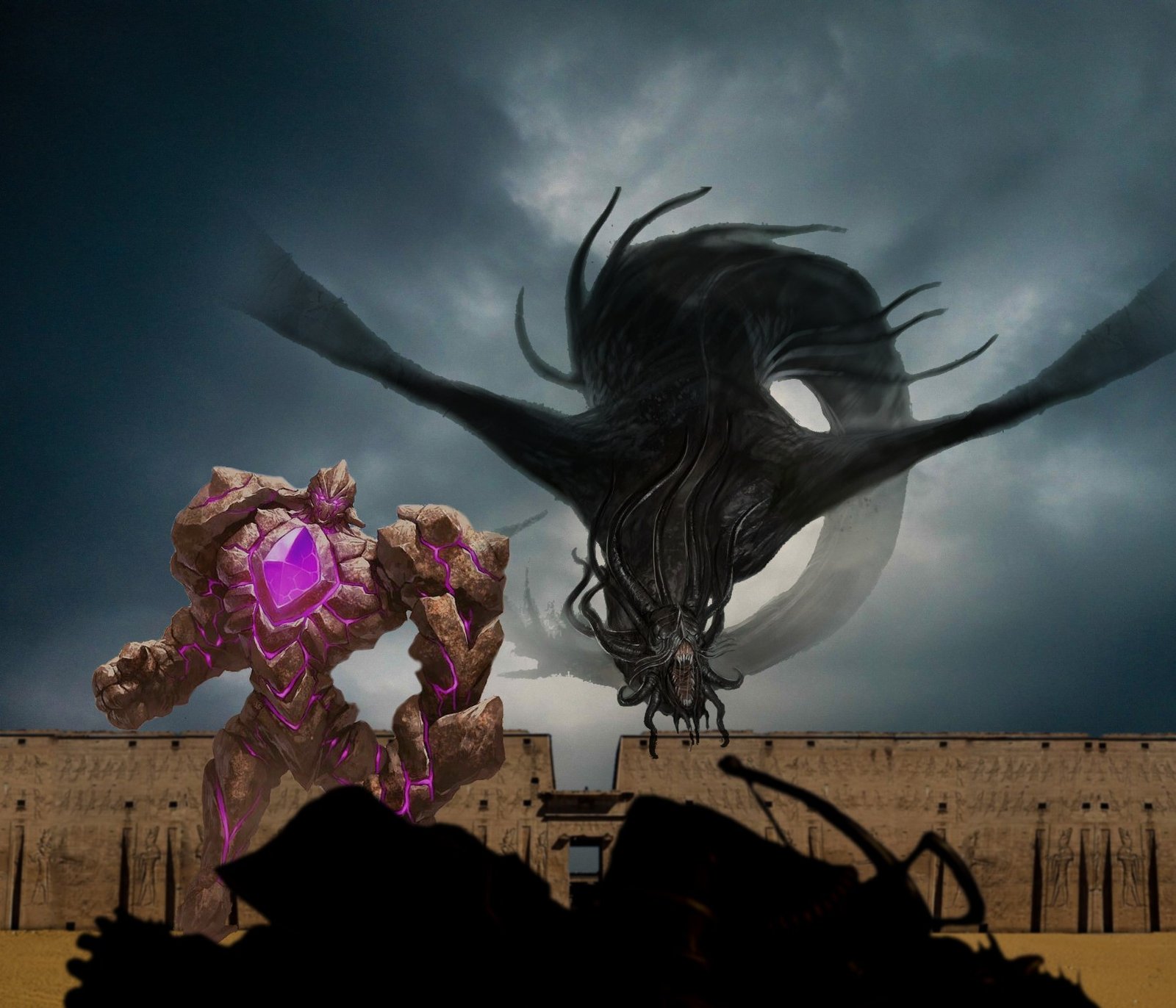 “I’ve had good ideas… this wasn’t one of them.”

He was apparently full of shit.

There were eight of us in total: Grey the Cloud, Aldwin the Faithful, Tohil the Tough, Uzza the Warlock, Commander Chemist, Red… the other color, and Naal the “Fighter”.

Oh, and me. I’m the dead one. The overconfident. The Bard.

If you haven’t been paying attention, let me fill you in… We met a beholder, a Sage, deep underground. He’s peddling in power, as most tyrants do, but also information. One little tid-bit was word of a “Glistening Desert”. Interesting alone but wait, theres more!

Far to the South is another desert. A decent enough place if you don’t mind the locals; Khenra.  These sons of bitches have an embassy in down-town Ruined Oak if you didn’t know. Anyway, someone apparently let the dogs out cause they went off to that “Glistening Desert” and got themselves killed. If you’re not familiar with the portals, they can be a bit tricky. They’re worth the effort though… especially this once cause the doggos were offering 20 large to clear it.

Khenra to the left of me, Sage’s to the right, here I am, stuck in the middle without a clue.

If anyone ever asks me if I ‘got the stones’, the answer is always yes. The eight of took a little trip.

BAM! Antimagic Boar. BAM! Flying Fuck You. BAM! Idol of Adultry. BAM! Giant Stone Guy who you have to divide by zero.

Our front line was immediately engaged after stepping through the portal.  It was like running into a brick wall, but when the brick wall is also running at you. I squeezed through on the back of Pery, my ugly-as-sin magical flying mount, and cast Greater Invisibility on the two of us. Chemist brought in the rear and the reserves. Naal dodged North to keep the Idol and Giant busy. The “Color Crew” went after the flying monstrosity. Aldwin and Tohil kept the boar busy. Uzza and I filled in where needed.

Well they needed more than me. The flying thing kept turning Grey into a cloud of mist. The boar was laughing in the face of all attacks. The Giant stone thing began splitting into smaller copies of itself. Billy Idol and the Rolling Stones were doing unspeakable things to Naal.

Flyboy smashed Red and Uzza out of existance. I hit it with a couple mind bullets that it just shrugged off. As I was distracted the Antimagic Boar crept up and took Pery out. I fell to the ground right before it, no longer invisible. Shit. Not my finest hour.

I’m told that the boar and a couple of the baby giants took turns venting some of their frustrations on me. I forgive them. Pretty easy to do when you don’t remember any of it.

The story goes that the others held on by sheer force of will… all except Naal who joined me in the dark. After it was all said and done, the others brought the two of us back just in time to collect from the Khenra ambassador: Onnuphi.

Negotiations are on-going. If you’re intrested, stop by the embassy and read some of the postings.