Oceans of the East

“My goal is the end of the world. My destination is the furthest border of the East. I want to behold Oceanus with my own two eyes. I want leave my footprints at the beach beside that endless sea.”
-Iskandar 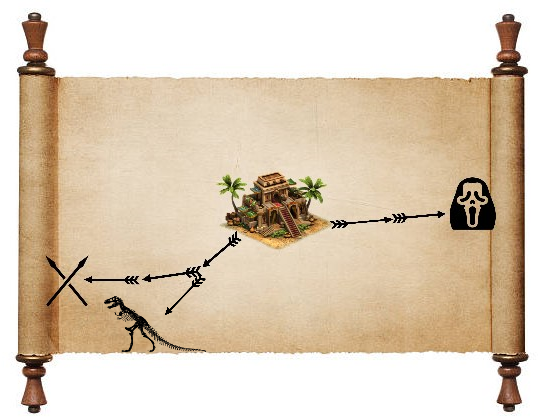 Quinn’s map from her first journey to GQE, each arrow being 6 miles.

Valor and I went back to GQE with a group, a desire to go east until we hit the ocean strong within our thoughts, convinced as we were that it was by the same coast as White Moon Cove. Along the way we met a venerable woman who seemed more knowledgable about the island than the people of the Lapendi Plains who told us that this area lies to the North of WMC (rather than the south as I had suspected). After saying our goodbyes to her we ventured eastwards some more and came upon the salt and the waves: Following that we went south and circled back to the portal. Along the way we had amicable interactions with some dinosaurs and engaged in diplomatic discussions on the nature of civility with some gnolls…. I delivered my message with a pair of arrows that exploded into hails of thorns.