Of Giants and Gimlets 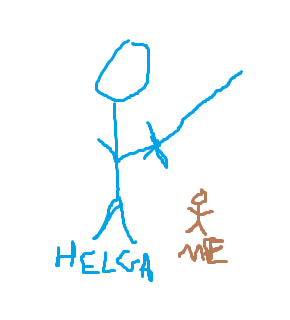 We took a quick trip to the Jub Jubs, with the following things happening on the way:
Cober contacted another plane to learn that there are frost giants guarding ZHT.
We also saw a whale on a gravestone, and some blue bananas 😉

We made it to the Jub Jubs , and convinced them to send Gimlet, and ambassador

Long ago, a group of Jub Jub explorers set out to the southwest, with only one of them returning — the Ancestor of the Noble.
He refused to speak in detail, becoming a hermit and building a tomb for his family — the tomb that we discovered to gain access to ZHT.
He had one relative left, the Great Grand Nephew Kelin, who wrote down a few words he had squeezed from his great uncle.
The only scrap of information left is as follows: “I only regret the sapphire maiden.”

We made our way back to RO, Gimlet in tow, passing by a strange pillar and a weird giant bird thing carrying a horse in its mouth.
We also interfaced with a chimera that we slaughtered. Some people learned how to turn themselves into a boar.

After making it back to town, Don cast Legend Lore, recounting the following tale:

Thrymnar the frost giant and his powerful greataxe decided to steal his rival Hymnsworth the Aasimar’s hammer Olnir, holding it ransom in return for Hymnsworth’s sister Blenchett’s hand in marriage.
Additionally, the agreement dictated that Thrymnar couldn’t see Blenchett until the day of the wedding. Blenchett showed up late, draped in a white dress and veil. Upon lifting the veil, he discovered Hymnsworth in disguise.
Hymnsworth then slaughtered every frost giant at the wedding, including Thrymnar.

We prepped, and stepped through the portal into a frozen forest, as expected. We, of course, faced off against a veritable horde of frost giants — mages, skalds, barbarians, archers, the works. I have decided that the name of the leader was Helga. It doesn’t matter, though. She’s dead now.
The fight was difficult, but with a good deal of luck, we prevailed. However, upon investigating the bodies, we found some sort of binding scroll, discovering that the giants had bound an Invisible Stalker.
I chatted with the Invisible Stalker, and it notified us that its name was Zephus, and it wanted to get back to the Elemental Plane of Air to better facilitate its tracking of its quarry — a dao.

Cober sent Zephus back home, and Anhinga and Eight saw snowy mountains to the east, and snowy forest all around. Instead of exploring, however, we packed up and headed home.