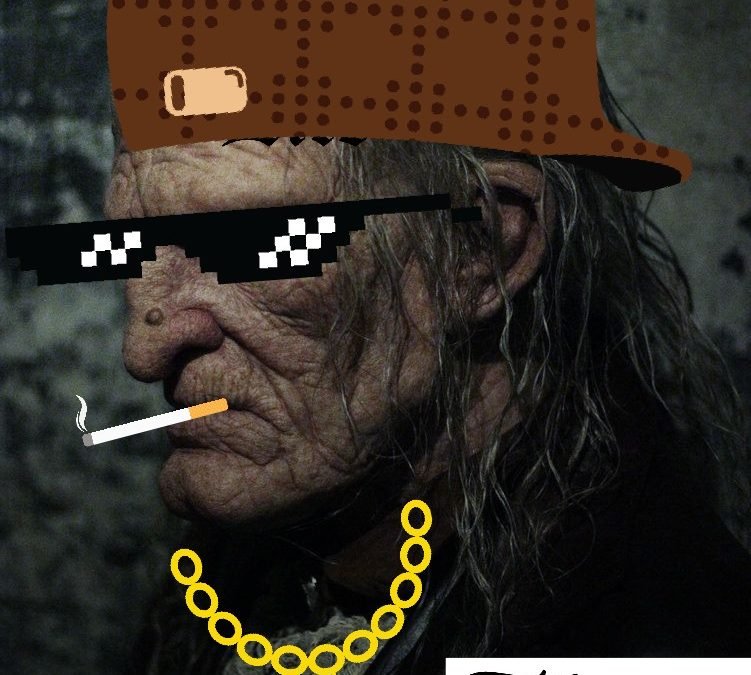 Second report and doing fabulous! Sis and I answered a fresh letter on the board to find bandits. I’m sad to report this was not an expedition to join and learn about being a bandit.

We set off and had no issues till we encamped and got caught off guard by this lady in white. She was talking to us in what Nice Creepy Guy GreGory said was primordial. Her name was Ice, a very apt name as she was awfully frosty to us. She wanted us to stomp the bandits invading some vault holding some ancient evil. For seemingly no reason she accosted us by holding us in place with ice. Like how rude… we were gonna take out the bandits anyway.

Then she somehow showed us this epic battle involving a primordial creature that was like taller than… well… think of the biggest tree you’ve ever seen and this guy would use that for a toothpick. She handed Gregory this frozen key and said it would help us cut the bandits off at the pass. Then she just jetted away. For an all-powerful ancient creature, you would have assumed she had learned some manners.

So we get on our way and get to this ruined area we learned later used to be a castle. Sis and I snuck ahead and found bandits just outside the cave entrances. With some team work, we dispatched them quickly. Arrows, Magic, halberd, and tentacle saved the day.

We came up with this awesome plan to pretend to be bandits with a prisoner. Two of us took the forms of some dead bandits and I put yavari in some illusionary manacles and we walked down the bigger hole which leads to a silver door. The Creepy Nice Guy used the key from the frosty ***** and it poofed away, key and all.

Only a few steps in we came across a small room in which sat an old man. When I say old, I mean impossibly ancient. The man had lost his ability to walk because of sitting in his chair for untold millennia. He told us his name was Yassairian and though he looked human he was from a race known as Hausion. This dude predates the sundering, even the ancient tabaxi we’ve come here to investigate.

Some of this information we got after exploring the place more thoroughly. Nice Creepy Guy GreGory carried Yassairian through the tomb for our time there. We found not much of Intrest in the first portions of this facility as it was mostly a living area. At a dead end, we found an ancient portal device with three buttons. Bronze, silver, and gold.

This tomb was huge. Coble stone pathways about 25 feet wide with many statues that represented those that constructed this primordial prison. The sarcophagus was placed with the dedication to people who died imprisoning the primordial.

We were attacked by floating doggo heads that were really nasty. One laid me flat out with one attack. Yavari saved me with my healing potion after they slew them.

We took positions in the central chamber to await the coming bandits. It was a bitter battle. The bandits had control of two of great great great great great grand pops hounds. Valorean sent them back to pop pop, but taking a lot of damage in the process.

The rest of the bandits were simple to overcome but their leader “Captain Dumb-***” escaped. Nice Creepy Guy GreGory asked him why he was trying to release the primordial as it would doom everyone. He stated the power would be his yada yada yada and then ran away because he couldn’t handle us. Like he can’t take on the six of us but thinks he can control a primordial? Puh-lease!

So there were four sarcophagi in the 4 corners of this facility. They each had four portal buttons on them. Bronze, silver, gold, and platinum. We were told hitting all 4 platinum buttons would seal off the portals that bandits used and open a one-way portal out. We tried it and it worked. Leaving behind the old man.

Amazingly it popped us back to white moon cove which was odd but we were thankful. Everyone was so awesome. Glad I could share this experience with all of them.