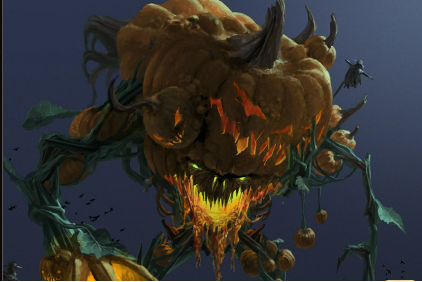 The Farm and the Note

I joined a coterie tasked with protecting farmers at the recently-founded Port Mirandia. The wilds of Katashaka would snuff out this colony if left unchecked. We left White Moon Cove and used a magical portal to instantly transport to our destination. This was my first time through such a device, and the experience was surreal and surprisingly refreshing, like taking a peppermint bath. Ssej, the cold-blooded leader of our forces, didn’t weather the trip very well and needed to be resuscitated.

On the other side, we were approached by an attendant who gave us a note that was nailed to a farmhouse door.

“Beware for he will come in the night! It is best that you take fright. Flee with your life, flee with your wife for he shall appear on the 3rd night from the Pass of the ives. You have been warned! Harken to the horn as his heralds will come first, with your blood as a thirst. Shut your doors, do your chores, but the nights will not be yours. – a concern traveler.”

The attendant informed us that today was the Pass of the Ives, and thus we had three nights until the forewarned “he” appears. We walked to the farm and met a family of goblins and humans who lived there. Bigyoung and the Nya‘s explained that they had found the note and encountered no supernatural encounters–only wolves and other critters.

The First Night: A Hay-binger of Things to Come

We set up watch around the farm’s windmill and in the still of night the whispers started. I roused the rest of the gang as the field scarecrows came to life with a rustle of straw and hay. I underestimated whatever spirits puppeted the straw-men and foolishly engaged one head-on. A ruse! Not a moment later a swarm of beetles erupted out of the ground! I was overwhelmed by the scarabs–they bit, stung, and flew down my throat–and I soon collapsed to the ground. Imagine that: Diego the Daring, the Jousting Jackal, suffocated by bugs!

As your hero took a dirt nap, the remaining band of adventurers held their own. Slicing and swatting their own swarms of locusts. Lighting the scarecrows ablaze with fire. As my life was going out, Hillval the cleric stoked the soul within me, and I surged back into action, spitting out beetles and leaping to my feet. It seemed the whole world was covered in a plague, but with mettle and might the party crushed the bugs and burned the straw-men.

The Second Night: Behooved to Act

With no more threats, we rested until the morning and braced ourselves for tomorrow. Again, we took watches as the night sat in uneasy calmness. Out of the fields bounded giant cows and goats with sunken eyes, charging and stomping anyone out in the open. It was utter carnage.

Bull fighting was never my game, so I took up perch on the windmill catwalk with Xurt. The mooing and bleating were deafening, but these enlarged bovines were only the first course. A huge chicken the size of a roc clucked, pecked, and scratched at Hillval, knocking him on the ground! He was rescued by Inti and fought on. Our magicians subdued some of the mad barnyard animals, and we butchered the remaining possessed creatures–a scene most fowl.

With the sun rising on the final day, we knew “he” was coming, the creature heralded in the note. We built some barricades and waited for the final night. It started with a procession of pumpkins-come-to-life. Next a giant mass of writhing vines rose out of the fields and hovered in the air. It grasped me off of the windmill and dropped me two stories. And then finally, the Pumpkin Prince arrived. A twisted mass of plant and gourd with a carved mouth that spewed pumpkin guts. It laughed and lashed at us as we surrounded it.

We were carving him up when suddenly he became ghostly, doubled in size, flew into the air, and dropped gemstones in the fields. He vanished with a warning: “I’ll be back next year with more tricks and treats!” We had all survived this demon pumpkin; and the farmstead was quiet after that.

During the days, we learned of other interesting opportunities around Port Mirandia. The boy Bill Nya told us of a dungeon to the west, almost to the woods. In the dungeon is a huge door made of pure gold covered in sigils and wards that no one has been able to open or harm.

Ted said recruiters from a mercenary band are looking for fighters and casters; Brill at the other farm will know more information.

And Grammy Nya warned us of black water that will drown the world,

“a black lake sits in an immense cavern. The lake is water, but water that has been changed. It doesn’t merely look black, it is black. A black that absorbs any light that falls upon it. It’s claimed that each time that lake absorbs light, it grows ever so slightly. If ever so slightly. If enough light reaches the lake, it will reach the surface and down the world in endless darkness.”