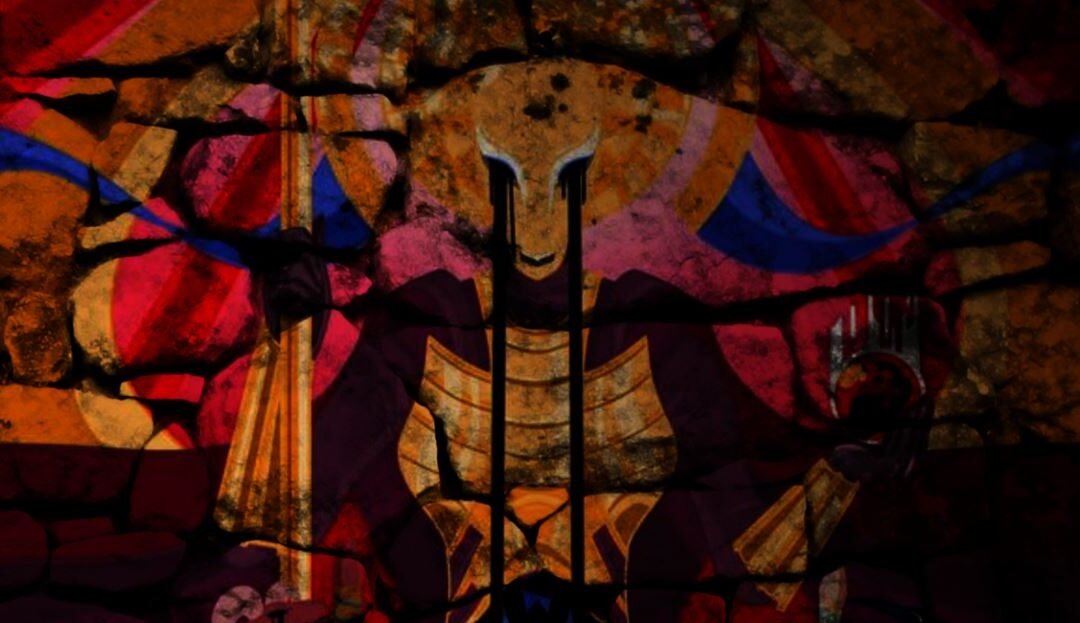 a heated slaughter of a Sarrukh village by serpentine Mhair

Our gang convened at the Potted Plant inn & tavern in Port Mirandia where we found the dwarf Yarsby up to his eyeballs in notes and maps. He summarized the divisions in the Northwest peninsula (around GQE portal):

Separately, he offered a reward for any information on the Blood Cultists.

Since we had lizardfolk in our ranks, we opted to make contact with the Sarrukh in the east.

The GQE portal rests on the edge of a lush rain forest, and we had an arduous trek through the thick vegetation. During the day, tiny spirits with black bodies and white faces approached our party with a playful demeanor. Ssej entertained them and was rewarded with a charm: a leaf with lightning scarred across its underside.

We made camp at night, but these forest spirits returned, begging us to follow them. We obliged and were ushered to a primitive village heaving heavy red smoke.

We rushed into action, looking for survivors and the raiders. We found grotesque bipedal reptiles with sharp claws that were hungry for flesh. We engaged the creatures, and soon their overseers joined the fray: a human man with the head of a snake, and a female human with a giant snake tail for legs and skilled in sorcerous magic.

After our brave band cut down the reptilian fiends, the sorceress shouted, “Protect the Sal!” while she and the half-man fled north through the still-burning village. I, Diego the Bounding Brawler, pursued them. While clashing swords with the snake-man, the witch’s magic overwhelmed me, and I fell to the ground. I could hear the sounds of battle and death cries from these snake-devils.

I was resuscitated by Shamsiel, and we regrouped. We found two surviving lizardfolk: a small boy and a gravely injured matron. Blue was able to communicate and convinced them to seek safety outside of town.

A Glimpse of a Goddess

Just north of the carnage we found several large pyramids with a parade field. On display was a gruesome scene: a lizardfolk being flayed alive by twisted nightmarish snake-men. The lizardfolk victim was restrained by two reptile-men like those we fought earlier. Also nearby were a large snake with arms and a scimitar, an even larger slithering creature with six snake heads, and a human woman with slate-colored hair.

Our plan to approach stealthily went awry. The giant snakeman sprang into action at the behest of snake-o-six-heads saying it should protect the Sal if it wants to “ascend“. Six-heads escorted the woman off the opposite side of the yard while we were engaged with the formidable snake warrior. Chaos reigned as Blue was the first to fall; Viv ran helter-skelter through the burning village. By good fortune and prowess we exterminated the vermin without losing any of our own.

The Mural of Subjugation

Up in the ziggurats we encountered lizardfolk younglings clutching eggs and a few older females. One of the females, Szara, explained the situation: many undead are flowing like a tide from the north which exposed the lizardfolk in their ongoing war with the Mhair (snake men). The woman with gray hair is called the Sal; she rules the lands, rumored to be the handmaiden of the gods and possibly alive since “the Splitting”.

In another ziggurat, a large colorful mural was discovered. Szara said the figure at the top represents the ancient Slavers, and along the bottom (from left to right): the Sarrukh (lizardfolk), Tabaxi, an unknown people, and the Mhair (descendents of the Yuan-ti). We had a Khenra’n ranger in our ranks this sojourn: Umbrys. Szara seemed suspect of him, and many in the group assumed these “Slavers” were the ancient Khenra’n empire.

The Mhair struck a decisive blow to the Sarrukh this night, decimating their progeny and future as a people. Could this human woman really be a demigod? She must be very powerful to take a risk exposing herself during this raid. She might also be foolish enough to do it again…