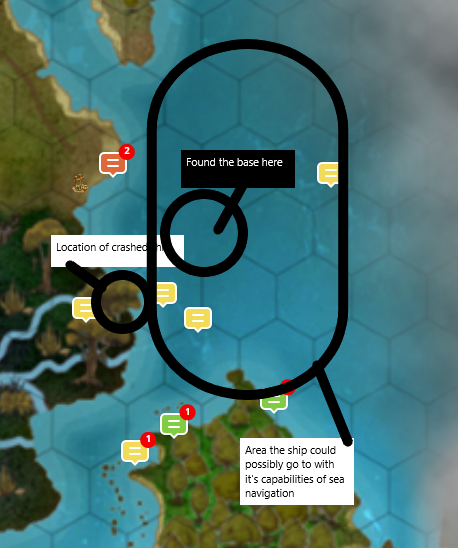 On the maritime investigation for a Talosian supply depot rumored to be in the area by local fisherman taking a pleasure cruise at night in eel infested waters leading to the destruction of aforementioned armory along with the annihilation of numerous opposition forces resulting in substantial material gains; and other encounters.

Prepared on: The Thirtieth Day of Marpenoth in the Year of our Lord 1495

Rather a more exciting start to our questing day as no sooner were we cast off in the Red Manta than Guardhouse Tower Four imploded into a pile of rubble. I later learned this killed all inside (except Zak the githyanki) including the three gnolls we had taken prisoner approximately three weeks prior. Yarsby and the rest of the AFK intelligence apparatus seems to have simply ignored them during that period; who knows what information might have been gleaned. However, it seems the only recourse now would be for the dead to speak in their limited fashion, though I doubt this will occur either given the general air of incompetence. It is quite clear those purporting to lead have not read their Moonsue or perhaps lacked the retention necessary to put the strategic and tactical wisdom into practice. Regardless, Captain Justin Robin was somewhat concerned and asked if we should return to port, but Lysing assured him there were a number of capable individuals about to deal with the fallout.

Turning the bow southeasterly at the direction of Eight, we pulled abreast the southern tip Centaur Island with the wind at our back and a beautiful sun overhead. Not but four leagues further journeyed, Quinn spied a dark mass on the horizon and not long after four smaller specks approaching that quickly materialized into small vessels filled with gnolls. Having a number of entities able to engage at range, they were able to rend the sails on one ship with no retaliation. I must say it is pleasant to venture into the wilds with others capable of the more primal aspects of the Weave, for in short order and despite some insect plague hindrances from gnoll mages three ships were set ablaze with fireballs, the fourth with sails shredded, all left as ghost ships. Following a short investigation of the wreckage and flotsam we found some minor valuables, after which we scuttled the wrecks and headed towards the dark mass growing ominously larger in the distance.

The structure appeared a deserted flotilla of three large ships lashed together and a wooden gate structure on the eastern side. Arriving finally within a hundred feet of the fort, Anhinga was sent in for a closer look taking an arrow to the knee for her troubles, but alerting us to the presence of three keelboats lashed together in the center as a sort of command center perhaps. Starting much the same way as our previous battle, a storm sphere from Lysing and fireballs from the other mages in our company rapidly tilted the battle in our favor. Soon this brought the apparent Talos dwarf champion of the floating fort against us riding into battle on a gargantuan hammerhead shark. He was able to make some small trouble for us darting into and out of sight, but after some heroic actions of Quinn (perhaps foolhardy depending on your perspective) and finishing blows from Eight we were able to put paid to any illusions of life the dwarf might have held. Despite the death of its apparent master, the shark took some time longer to deal with and sadly did not provide me time to learn the form. During the subsequent investigation, no further intel was gained as to future Talosian plans or location of key commanders or similar supply depots. However, we did gain useful magic items and goodly coin for our troubles as well as the destruction of what was undoubtedly a key part of enemy plans given the direct Talos oversight.