Leader: Lashi Trailblazer: Quil Scout: Eight Our morning started out with me joining the team last minute as some of the adventurers couldn’t make it. With us were two carts, the townsfolk of White Moon Cove, Spiderfolk and some Phase Spiders. We went along and ended up meeting a ‘Naked man doing callisthenics’ as Eight so eloquently put it. I reckon it made all of us uncomfortable… Faenoa particularly didn’t take too well to the man’s display of his lack of modesty. We hurried along, trying to avoid him and ended up resting near a waterfall. Faenoa and Lashi checked out the waterfall. When they came back I heard something about a naked lady singing whilst bathing in the waterfall from Faenoa… which was, rather odd. Two naked people in one day. Faenoa and I went out to hunt and gather. We managed to get a deer, some vegetables, and some bushels of strawberries. Later on my watch with her she spotted a shiny metal bit in the ground, half buried and hiding beneath a bush. I warned Faenoa not to touch it as I feared it could be a trap and we passed the watch over the Tenfoll’at, informing them of the potential dangers whilst doing so. I was awoken to Tenfoll’at’s panic to some noise to the Southeast but there were just some elephants. I used the time to cast Detect Magic on the metal bit in the bush, only to find nothing from my original target but…. something from the group of villagers. I raised some concern to Eight and Lashi and Eight decided to cast Detect Magic as well and headed towards the fire, where the townsfolk were, shooing them to the side as he did so. We both noticed the source of magic moving with the townsfolk, particularly picking out the farmers. Eight confronted them and they started cackling, grunting. Making noises Gnolls do. We figured they were Gnolls in disguise. I first picked up Dimble, Faenoa’s weasel and asked him to carry the message to Faenoa about my suspicion. The fight carried on a little messily but we eventually got everyone on the same page. A gnoll disguised as one of the farmer’s wives’ tried to sneak away but Faenoa caught her. Cober held her under a spell got some information from her. She was a spellcaster with a lineage to shamans, particularly the mothers of her family. We found out that the Gnolls snuck in with the townsfolk whilst on a previous farm mission. Lastly, we got an approximate location of where we were going to be attacked in the morning. We then went back to bed, passing the watch onto the others. In the morning we found out the metal was just a pair of gold manacles. 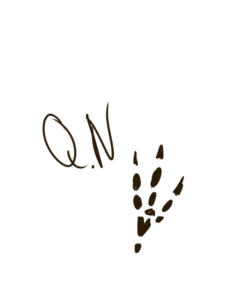