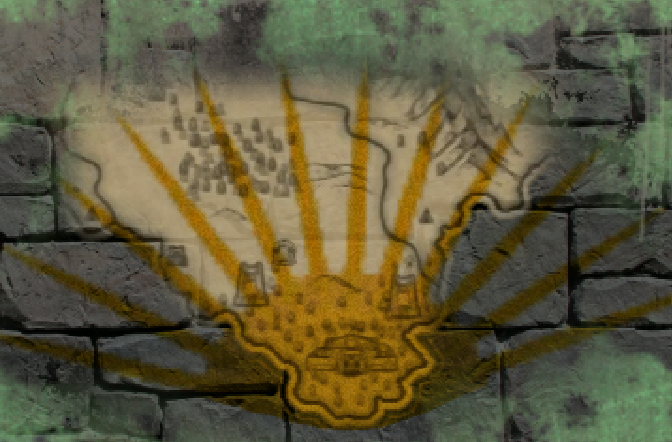 We set out from Port Mirandia and followed the western coast north. Our destination was the shipwreck entrance to the former octopus lair. Once on the plains, we were accosted by two large, aggressive boars. Don attempted to calm them, but they charged nonetheless. They nearly gored one of the party to death, but we were able to maneuver and cut them down.

Pressing on, we made camp along the coast and discovered a moldering waterwell filled with sea water and floating unlit candles. Not wanting to disturb a shine or some other sacred place, we let it be and continue to the shipwreck.

The wreckage was listed and stuck against the cliffs. We rappelled down with the help of a block and tackle, although some of us were more athletic than others. The intrepid little goblin, Glen, found the entrance to the cave system inside the hull.

Therein we explored a partially-collapsed temple with flooded hallways, bio-luminescent algae, altars, and stone coffins. Unseen in the water was a creature of undeath that ambushed as we got near, frightening and paralyzing several of the party. After putting it to rest, we found several valuables which we pocketed as payment for our troubles.

In one large hall, there was a painted mural of a map. Prominently illustrated at the bottom of the map was a square structure, possibly a temple or fortress, with rays of light painted out from it. Extending northeast and northwest from the structure were the edges of the map (like a cone or V), likely coast or rivers, and two towers were drawn along these borders. The end of a mountain range was painted to the far northeast, and a small collection of trees to the northwest. A river ran through the middle of the drawing, emptying along the eastern edge.

I could not find this location on any of the known maps in White Moon Cove. I am unsure if it’s a re-orientation of a place already explored, or a location yet to be discovered.

Searching further into this ancient site, Cally heard whispers and soon shouts in a language translated by Bardy. Two humanoid creatures with tentacles for faces and claws for hands were standing at the end of a long burial hall. One passed a satchel to the other who fled into the darkness and giving instruction to get to the “ship”. The one remaining assailed us with magics: invisible walls and psychic pains.

I, Diego the Daring, sprinted past the fishy sorcerer and chased after the illithid‘s compatriot. Unfortunately I ran through two empty chambers before arriving at a dead end, unable to spot my prey. Squidy threats echoed through the halls again, which Bardy translated as, “we control the temple”.

As the mages in the other room were slinging spells, we were running out of time as the tides were rapidly rising, threatening to drown us in the temple. This creature grew tired of playing with us, turned invisible, and slipped past us all as we changed our focus to exiting the watery tomb.

We successfully climbed out of the caves and back to dry land. With more questions than gold, we made it back to Port Mirandia.