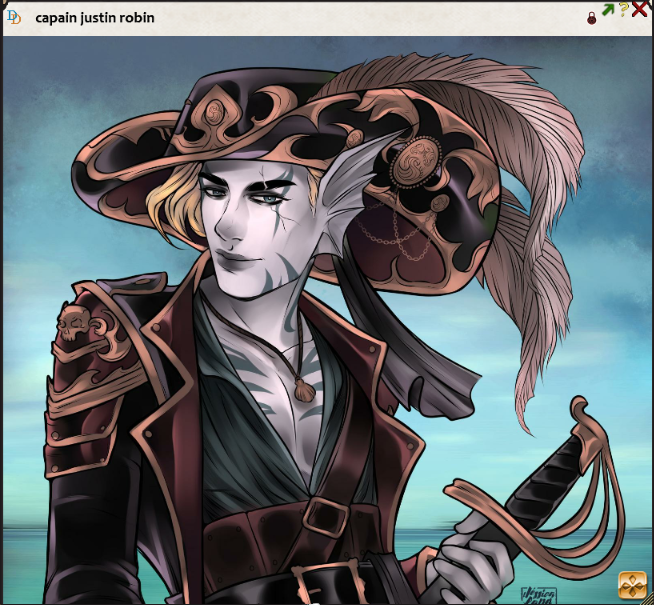 So we lot had gathered round in town and a bit of curiosity had sat in for me and wouldn’t you know the recent war had brought many things about. One just so happened to be a wrecked ship among the shore. So we gathered round and wouldn’t you know it we had to go by sea. So for a fee we hired a boat crew. Most notable of them was Cap’in Justin Robin, he was dreamy. He had such a floral scent about him, his voice was soothing. Like your favorite melody played on your favorite instrument over an over an an over again. Each note lifting your very stony heart to new heights. Possibly even making it out of the water it sunk in, till you get to the surface and feel the waves crashing over you. His kin be it a few go about the names of Red and Blue. It seems a lot of people like to name children after colors.
We got sailing aboard the red magna. I sat in the crows nest the entire time enjoying the dreamy look of Our Cap’n. His fins, his hair, his glorious bare chest. Everything about him yelled fish sticks. I enjoy his green skin and his platinum hair.
So later that night I thought I would try and impress the Cap’n with my lock picking skills cause every cap’n likes booty. So why not show him how I was a hot tater tot and what not. I wasn’t able to find a chance to sneak away on my watch but I was willing to for go sleep to try and check the cap’ns quarter’s for his hidden booty. Perhaps even a golden fish stick hidden among his family treasures.
With Scritch’s help I was able to tinker the lock open. As I gently pushed the door open I saw they Cap’n had a table set up for us with candle’s lit. “Hello Olivia, I’ve noticed you have been paying attention to me all day. I know I can’t dismayed a lady with such a look in their eye. Sooooo…. Come sit, and dine with your Captian.” His words made my thighs quiver and my legs buckled a bit. My face ran flush with rouge as I had not expected this to happen. Cap’n Robin ran his hand through his hair, as he did little sparles of light glistened. I approached after softly shutting the door.
“Well aye, Cap’n Robin, I’d give my left teet for this opportunity and now that I don’t I don’t know…” I climbed into the chair and he happened to have a few books stacked up so that I could sit at the table all comfy like. He chilled our wine with a magic spell of frost. Cap’n Robin, took me heart, he knew what he was robbin of me. But I gave it so freely, I guess you don’t have to be so discretely. “This is not what I expected.”
“What did you expect to see Olivia. Me sleeping in my bed. Perhaps come even try and steal a kiss.”
“If we are being honest, aye. Dat I was.”
“Mhmm, and what reason for this would you have? That is a criminal activity, isn’t it? Quite punishable actually. And whom would be the one in charge of giving out punishment?”
“You Cap’n.”
“Aye, I can think of some ways to punish you little lady.”
“Oh, Cap’n please don’t throw me overboard!” I replied in a hushed exclamation.
“No, I have other ideas.”

We finished our diner and discussed many things through the night as we rocked back and forth in the ship as the ocean moved the ship in a back in forth motion. I enjoyed the diner of fish sticks and wine. I felt such sensations you could even call them divine, I wanted Cap’n Robin to be mine, and happened while sailing over the brine.

The very next morning I was exhausted and sore, the punishment was worth the bounty.

The rest was essentially us finding kobolds at the shipwreck. Then following them back to their camp through their tracks and then take out that camp. We managed to drag a dwarf back with us, but it seemed the Khenra did not want us geeting more information as they assassinated our chance at taking the Dwarf of Talos home.

We got back to our ship and I took my perch to watch the filet of a man name Cap’n Robin. Another night passed another romantic diner and plenty of less sleep. Over all I’d give Cap’n Robin my heart if ever he’d have it but a man like that will never be caged.