Tides of conformity: Gnolls on the plains 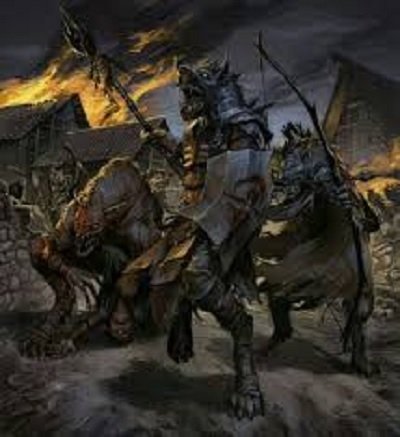 Trailblazer: Perbin a Halfling Barbarian (2) (Me)

Day 1: After just arriving in White Moon Cove, Perbin found himself looking for another dust up and itching to let himself go in the beauty of battle. At this moment he noticed three Yaun-Ti talking about needing some help to scout the Gnoll war parties in the plains. Perbin was not alone as a Dragonborn and Githyanki also over-heard their need and the three of them as the snakes to join. Ratherio the Dragonborn and Q’ithos the Githyanki stood tall over Perbin but he was not unfamiliar with this situation. The three Yaun-Ti, Shouzhu, Cober and Nag’ni decided having 3 more bodies couldn’t hurt and the six of us set out for the plains after they explained the mission in more detail. As we left Perbin noticed an unusual owl hovering overhead and then Cober called out “Anhinga” and the bird flew down and landed on his shoulder. The first day was uneventful the party left White Moon Cove. The party decided to camp near the crossroads south of Nethy Woods on the way to the plains and found a small indentation the ground that would fit the camp. As night went by they noticed a rot iron fence with skeletal arms on it that sat in front of a burial mound. Nag’ni uncovered the dirt and the party found a black silk mask with silver threading and potion in the shallow grave. Rest of the night was uneventful.

Day 2: Was also uneventful as the party travel north on the road into the plain. They passed some dried blood of an old battle and eventually passed the old Hobgoblin village. The party set up camp just north of the end of the road in the plains and as they slept they tried to trap the Gnolls, but instead a wild monkeylike creature and a swarm of web foot pups ambushed the party. The monkeykin was quickly chased away bleeding heavily and the swarm was put down. Q’ithos noticed as he fought the pups they took things off his person. Not too soon after this brief encounter a small herd of horses wandered into the camp grazing… a strange occurrence for them to travel in the night. Nag’ni tried to approach them and all but one horse fled away. Perbin noticed she cast some magic and she got some information from this beast she called Thunder Hoof. Perbin fed Thunder Hoof some squash as he deiced to stay with the party for now.

Day 3: The party embarked out moving northeast or at least they thought so. Perbin being new to the island got turned around a bit and they ended up in the northwest hills. As they went thru the hills they noticed a large footprint in the ground near the old kobold cave. Cober sent Anhinga into the cave to take a quick look and the last vision the owl saw was a Troll and its weapon crushing her. After realizing the danger the party moved quickly toward the north east and then Rathrio spotted smoke of a small camp ahead. A resummoned Anhinga took to the skies and saw clearly a Gnoll encampment she also spotted two scouting parties of the three groups of Gnolls nearly twenty strong. Perbin had the crazy idea to lead the Gnolls to the Troll, but the Shozhu pointed out that taking out one scouting party and retreating back would be tactical for our mission. The party engaged and everything seemed to go smoothly Rathrio hacking away with his pole-axe, Nag’ni slithering and stabbing, Shozhu mocking the enemies as bolts hit them, Q’ithos flanking with Nag’Ni, Cober and Anhinga providing ranged support all the while Perbin was trying to catch up with his small legs. Suddenly from three different direction new players joined the fray. A large web-footed dog from the south, a lone Gnoll from the northeast and a lone Dwarf from the northwest. The battle grew fierce as the Gnoll scout leader was strong, Rathrio as well as the rest of the party assumed the Dwarf was friend and that cost them. The Dwarf revealed himself as a Cleric of Talos that was aligned with the Gnolls. The party scrambled to drop the scouting party to avoid the main camp joining. Perbin finally arrived and began yelling in a mixture of Common, Halfling and Primordial as his movements became quicker. Shozhu and Cober focused their efforts on the Dwarf who showed himself to a dangerous threat as Q’ithos, Nag’ni, and Purbin surrounded the Gnoll scout leader. Two power spells from Shozhu confused the Dwarf as the rest of the Gnolls fell. The doglike creature focused Perbin and eventually fell to Ratherio’s halberd. With the dwarf seeing more snakes than actually around him Perbin’s scimitar gave a fatal slash across his abdomen… the battlefield quiet for the moment the party fled to the hills with Gnolls quickly following. Once in the hills the Gnolls stopped as the party found a grave stone or a shrine to Tsaran… unfortunately they realized this after Cober read the infernal and he said he felt slightly weird after reading it. The night watch went smoothly

Day 4: Instead of return to White Moon Cove the party decided stopping at Jub Jub Village would be the best choice. The day went without a hitch as the six made it to the village and could finally relax.