To See a Guy About Some Fishsticks 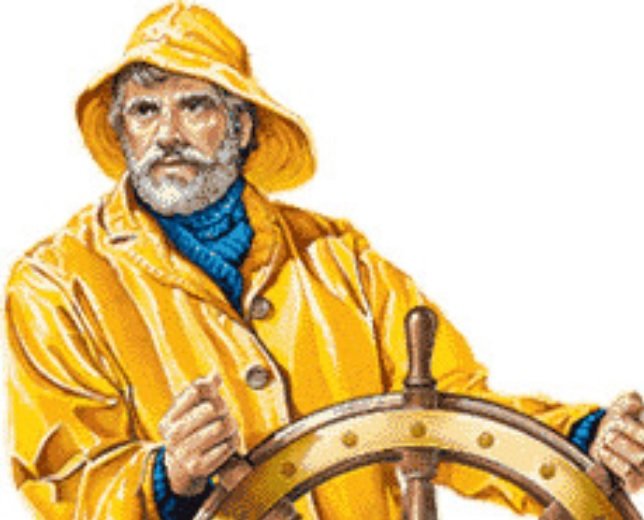 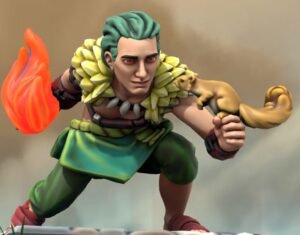 We decided with the threats of gnolls attacking that we should warn Gordon the Fisherman and his mate Lozonzo and we decided to walk the coast line instead of take the road to see the wildlife of the island. Just as we thought we were seeing some of what the island had to offer in two giant snakes. Gau tried to speak to the snakes but as soon as he approached the bridge they were on a Kenku jumped out of the bushes and sent an smaller snake at him an adder I think Shuraar called it. 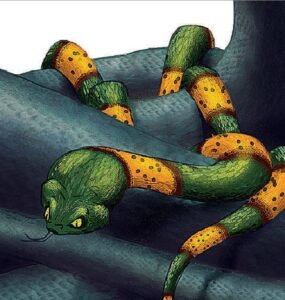 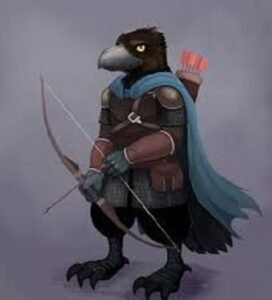 The Kenku was asking for gold to pass the the bridge. They must of copied this from some troll they readabout or saw in action.  Arrows began flying as more Kenku and some strange abominations came out of the bushes. The ambominations were foul smelling and surrounded by flies. Some of the Kenku seemed feral or something worse. 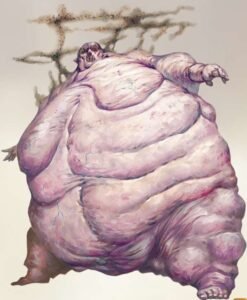 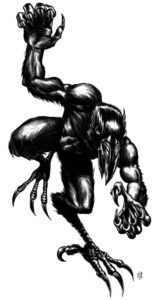 Gau tried one more time to be friends with the snakes and when that failed he turned into a wolf and began to defend himself. Belanor, Oxalis, Shuraar and Sven tossed their magics toward the creatures. Tuzok rushed forward with his pick while I fired bolts.  Almost as quickly as it started the battle had ended. Unfortantly for Shuraar and Gau all the animals were killed… I guess it had to be done. We searched the bodies and found a note on one of the Kenku.

Crimes against The Guild will NOT be tolerated. Track down teh thief Redorgan and return with the money he stole, as well as all of his fingers.

We figured these grunts were tasked to find a doublecrosser or at least this order was sent out to all. I read somewhere that a Jet black Kenku attacked some adventurers in the Northwest and left a card saying “Nevermore” this might be connect or not, but something to look into. Also finding this Redorgan might net someone some money if theylocate him. We continued walking and found the camp site the Kenku most likely used and decided to camp there for the night.

We ate teh meat of teh snakes we killed earlier and set up the camp for our liking. We found some wet peat and decided to dry it out and attempt to take it home to sell it. On Oxalis’ watch something approached us quickly and charged into the campsite. It startled us awake and we took to arms to defend ourselves. 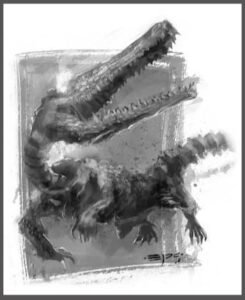 When I awake I saw this… skel.. ali… no skelegator attacking Oxalis and decided to not waste my bolts and drew my short sword. As quiuck as these creature rushed into our camp it was put down and us back to sleep.  The undead creatures of this island are expanding… necromancers have to be experimenting (more on this later). We finished sleeping for the night and got ready to see Gordon.

We shifted our means of travel to be just off teh coast to make it to the hut faster. We noticed some arrows in the area as we walked but nothing else really of note on this day. We arrived at Gordon’s and were welcomed to spend the night. He shared his fishsticks with us as well as a story of a giant in the ocean he thinks is gaurding something. He also confirmed the orange flashes over the ocean have continued to happen. We warned him of the Kenku bandits and the Gnoll threat. He seemed rather calm since none of those entities had messed with him before. He was more worried about sea creatures. 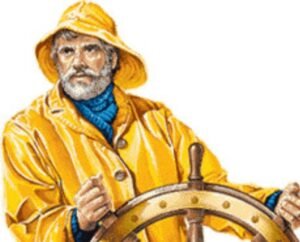 We slept in his hut and moved on in the morning. It was nice having a place to rest while out on the road.

We took to the road to head to the Black Footpad Inn and end our journey there. The road was rather calm for the first couple of hours and then we heard screams in the distance. Also an occurance I feel happens far too often on this Island. Preparing for the worst I loaded my crossbow as we went towards the screams. So similar to last time I heard screams and the party moved towards them… it was commonfolk unable to defend themselves running from something. This time however they were running from a Gnoll and his creatures. 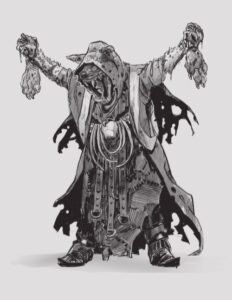 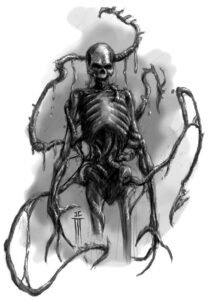 Seeing the Gnoll with his undead pet and two swarms of rats it made me think of the skelegator and that it could be possible that the Gnolls areexperimenting on creating new undead creatures. This is a scary idea with the upcoming front. That said we tried to stop the swarms from eating the commoners, but could only manage to save one. We shot down the Gnoll as it tried to flee, but we found no orders of notes on it. From recent intel though I am assuming this was a Pelt Wearer. His skeleton grew some crazy vines that allowed it to attack from a distance.  We escorted the commoner to The Black Footpad Inn and decided to take sometime here to ourselves before returning to White Moon Cove.