To Think I Almost Drank That Pig Blood, Man. Wiiiiiiild. 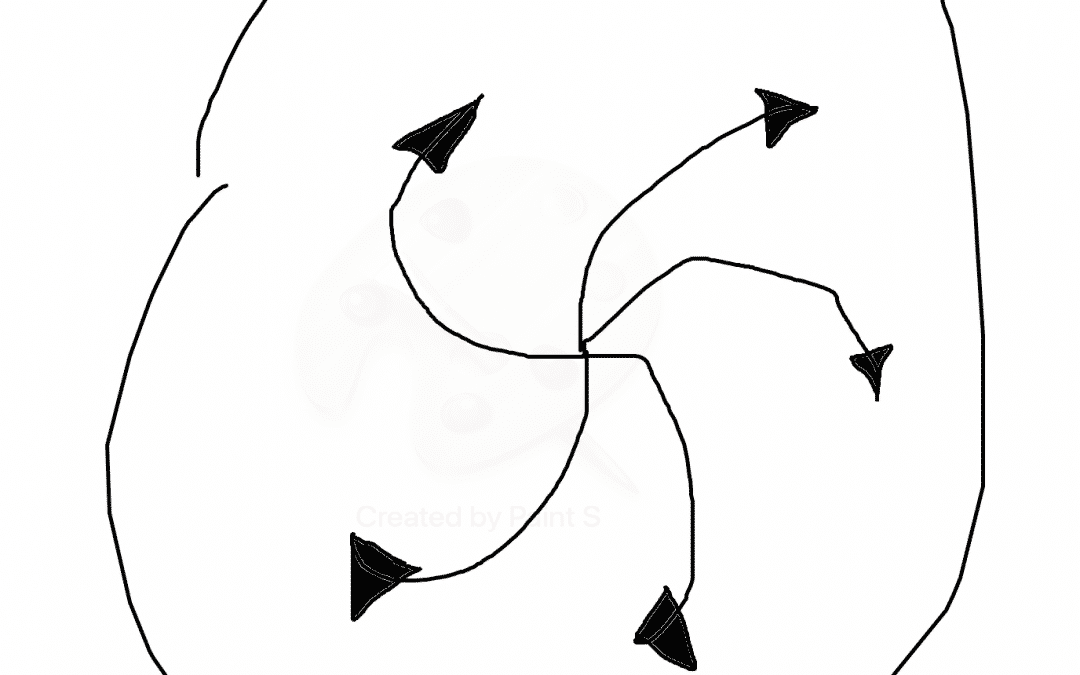 Our group set out on a pretty brisk day, following some halfling kid to a farm. Turns out his dad and uncle owned farms, and had had some livestock slaughtered and mysterious bladed pinwheel sigils carved into the dirt on their farms. The five-pointed sigils were huge – like, forty feet across, and were carved a few inches into the ground and filled with ash created via a fire bolt cantrip. Strange. They were a bit concerned for their own safety, so we investigated.

We found some craaazy chaotic blood spatters – looked like the animals had been disemboweled and decapitated in a sacrificial manner. Dwaff managed to come up with a name – Garagos – to which the symbol of destruction and chaos was related, and after checking out the other farm, Rig found some tracks heading eastward.

Heading out on the path of these tracks, we found an ash-stained coin pouch and a piece off cloth. We were headed in the right direction, as could be seen by the group of hobgoblins we were attacked by. The hobgoblins’ faces were painted with five dark lines each, and their mages were as problematic as their berserkers. We dispatched them with some difficulty, discovering a few strange things on their corpses. Firstly, a heavy urn and some vials of dark red liquid. Secondly, a spell scroll of Hallow that was simply wrong. Ineffective, non-magical. The mage had made mistakes in scribing it, and it didn’t function. Lastly, one of them had a compass-like tattoo on their palm which, in combination with the strange glowing red crystal, we were able to follow to their hideout.

We approached said hideout, a ruined temple, and delved into it, past illusory barriers and trapped doors. In the inner sanctum, we faced off against a hobgoblin mage and his two huge guardian constructs, which proved to be incredibly dangerous. With some well-placed shots from Twee and some lucky smites from my own blade, we managed to take them down without losing anyone.

I came across a strange orb, its magic fading, but when I grabbed it, it clawed around inside my mind, begging for destruction, dealing a good bit of pain to me. I tried my best to give it the destruction it craved, but only succeeded in cracking the orb into four quarters. Jyn Identified one of the quarters, and heard its call to be whole again, as well as the requirements – blood and iron, ash and bone, fear and pain, suffering of the innocent. Rig crushed the quarters, and Jyn collected the dust.

We explored the rest of the compound, and found some good treasure, as well as an interesting ritual room which we ransacked and destroyed, and a small laboratory/office space with notes about the ritual. It was an attempt to harness the fear and pain of the loss of White Moon Cove, with the blood and bones of the butchered farm animals, in order to use the strange orb to contact the aforementioned demigod named Garagos. Good thing we got that sorted out. Oof. Lastly, we found a hidden compartment filled with failed scribings of the Hallow scroll. What was this guy up to?

Regardless, we informed the farmers that they were safe, and headed back home without much more incident.