When they ran into a crabby problem, they said: “What’s the worst that can happen?” Click here to find out what

A few days ago, a group of six volunteers wanted to help some farmers near Port Mirandia to clear the land for their new farms. After the loss of the fertile lands around White Moon Cove, finding new arable land is, after all, a top priority. And so the following group of six set out one morning to help farmers:

(a total of eight pages, starting and ending with a group shot, and six pages with photos and short biographies of the participating heroes – as well as paid advertising – follow, in alphabetical order: Abel, Cober, Faenoa,Ilsan, Oxalis and Saoch)

As they were nearing the land, they were hated by farmer-to-be Stu Mickles, who had already started clearing his land but) into an unforeseen problem: he said there were monsters on his land and he didn’t dare to remove them. So or six set out to take a look at these monsters.

To their surprise, the “arable land” was a stretch of beach on the seashore. Wondering how a plot of land that regularly is covered by seawater could become arable, they first took a look at the area from the next and there they immediately saw what the problem was.

In four areas marked off by big rocks, there was total of 12 large and huge crabs. The huge crabs were of and unnatural blue color. For a moment, our six entertained the notion that the stone circles formed some kind of corral or living area. But they was no signage indicating an owner, nor did these crabs seem to be intelligent. The group has tried to address them, but instead of responding, these crabs left the stone circles with the obvious intent of attacking our six.

Of course, the group from PM did not cherish the thought of becoming crap food and defended themselves. The smaller crabs were a bit faster and seemed to pack quite a punch with their pincers, attracting everyone’s attention until the first blue crabs arrived as well.

When these blue crabs finally arrived and participated in the altercations, two things happened at the same time.

It turned out that the blue crabs were electrically charged and when the six from PM hit them with metal weapons, this electricity arced through the weapons into the heroes, delivering a quite stunning jolt.

At the same time, those crabs that had been further away and therefore had not reached the others by then opened some kind of small door and shot at the heroes with bolts.of electricity.

Te sorcerer in the group caused some additional chaos, first by covering the area around him with grease, and then by casting the Fly spell on Cber who had neither expected this nor was he accustomed to using this way of locomotion.

Undaunted, the six kept fighting, . and getting shocked.

When they had reduced the opponents to only three big crabs, someone approached them, shouting “stop that!”

As they turned to look at the intruder, they saw an elderly man who introduced himself as Rastuga, the owner/creator of the crabs who accused them of trying to kill his products.

After some back-and-forth, tempers settled a bit, especially after Rastuga had calmed down the remaining three crabs. He, however, demanded some recompensation. Luckily for the covers of PM, he told them he had a little problem with thieving, winged women who had stolen a small chest of his if the six could recover this “box”, he was willing to forgive the crustacide..

Rastuga let them to his humble cottage and then pointed them in the direction where he had seen these flying females, and off they went in search of more exercise. 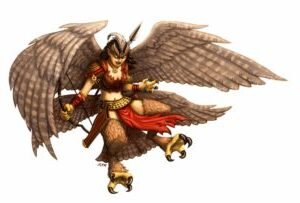 After some searching, they came upon what looks to be a shipwreck on the beach, next to a little cliff – and four harpies, who, unusually enough, seemed to be owl-based. (The proper taxonomy for these is homo volans strigiformus.)

One of these started of the discussions by casting a darkness spell into the middle of the group, hoping to hide one of her friends – and was sadly disappointed when she had to realize that at least one of the six intrepid adventurers had sharp enough eyes to still see the opponents.

During the following fight, one of them [probably the one that also had cost the darkness] managed to charm two of the group, and the second smallest of them even twice!

It also was a little setback that they on occasion attacked single members of the group with some weird dust falling from their feathers/wings that turned one of them blue and had as main intent that it could send the people it to it to sleep.

Despite all this, they finally managed to down the fowl fiends, after which they discovered in the wreckage a large broken chest that contained a decidedly smaller chest that answered through the description Rastuga had given them of his property.

Elated, they make their way back and returned his property, telling him he should mark his crabs in an obvious way to avoid future mistakes and also telling him that he should take a look at PM two see whether he would be appear to live there.