On the identification of excavation by means natural or otherwise abutting the municipality of Mirandia with the ambition to yield raw ore for the furtherment of port augmentation and facilitate metallurgical  auxiliary arts as is glorifying to The Holy Maker of All Things and other disconcerting discoveries.

Prepared on: The Eleventh day of Eleint in the Year of our Lord 1495

The walk to the abandoned mine’s location was nearly on the doorstep of Mirandia itself and proved no issue in locating. Ildan, fearful for his mounts life in such likely close confines as the grotto was likely to contain, left Umbra near the entrance with instructions to alert him if anything went amiss whilst the party ventured into the depths. Not long into our excursion (Area 1 on the map at the the foot of this report), we encountered a swarm of Rust Monsters who gave our armored companions a bit of a fright and an umber hulk we managed to incapacitate before too much damage was done. Alas, the faithful owls of Tenfoll’at and I met an untimely end at the hand of the creature’s acid breathe.

While crossing the river (Area 2), my macabre creation Os the Black endured grievous injury at the hands of a giant squid. Thankfully, it was not another member of the party or they may not have survived the onslaught. Tenfoll’at proved very useful levitating the squid to the surface so we could fight the beast on our terms and Lysing put on quite a show of electrical power dispatching the foe. After taking cuts of tentacle for some dish Gaz called calamari and discovering some miscellaneous treasures from poor souls not so fortunate to survive the monster.

Pressing onward after a switchback that led us back across the river (Area 3) we chanced across eggs that Tenfoll’at first informed us were eggs of a crocodilian kind, but we later found to be Rust Monster eggs. An unfortunate identification, but Gaz (seemingly undeterred) carried these eggs all the way back to Mirandia and to my knowledge either intends to raise the young as beast companions or to use in some sort of avant-garde culinary creation. Just a bit further in (Area 4), we passed many deposits of ores useful for crafts of all kind. Tenfoll’at seemed particularly interested in the aluminum though didn’t take any at the time. Further to the north and around the bend (Area 5), we encountered an area of fresh water that contained some coral-like life. Spying an object of interest in the water, Gaz jumped in and seemed to be incapacitated by either the coral or some other phenomena. After fishing him out and ascertaining his soundness of body and mind, he proved lacking in one of those aspects and dove back in the water. This time securing the object, it proved to be a stone with Aquan script reading WK on one side and NO on the reverse.

Puzzling of what import the letters might hold, we discovered a door surrounded by runes in a combination of Infernal, Celestial, and Primordial, with an eye in the center. Many abjuration auras were sensed in these runes as well as an aura from all the arcane schools emanating from the keyhole. Lysing tossed a rock at the door and it launched a whirling device back that corkscrewed into his head before he misty stepped away to safety. After launching the device, it appeared one of the abjuration runes drained of magical energy, which we took as a sign the magics mayhaps could be expended in ways less lethal to our party. Recalling the words of the great strategist and philosopher Moonsue (“Stop thinking, and end your problems.”) I then cast a protective tiny hut made popularized by Leomund and the group proceeded to throw rocks at the door. Runes seemed to be discharging slowly and after the third rock the door nearly simultaneously dispelled the hut and lobbed two fireballs the first of which I was able to counterspell. Singed, but avoiding more egregious injuries, Os was sent out to test the door, which had opened now. A small answer to the riddle of runes on the outside of the aperture indicated “KNOCK” was the password to be spoken allowed to this sentient door and gain entry. Not the outcome Sonsue or I anticipated clearly, but life is it’s own reward I think you will agree. Fortunate for us we noted the password for no sooner had we entered than the door closed behind us, but as quick echoes of “knock” rang out from the party and the door opened it was clear there would be no difficulty returning by that route. Upon further examination of the room, the skeletal remains of merfolk and kobolds were strewn about huddled around long dead fires. The door informed us these poor souls had died of starvation and an inability to leave the room, which had been enchanted to prevent any divination magic from finding the place. While the majority of the party was conversing with the door, Gaz noticed footprints appearing where they should not be and stalked them to an invisible dwarven worshiper of Talos. Without a word, the crazed fellow ate a death worm demonstrating true belief in his god and a willingness to give his own life for a greater purpose. Martyrdom is truly the ultimate sacrifice to which Consecrates such as us can only aspire when called upon to do so by our own deity don’t you agree? But enough philosophizing. Before the maggot worked it’s way to the cultist’s brain and under the compulsion of enchantment magic to truthfully answer our questions, the dwarf indicated that the combined might of the Gnolls, Blood Cultists, and Talos dwarves had been making preparations to attack Port Mirandia within a fortnight. The Whosedare Mine itself he indicated had been a base of operations for some time though he hadn’t the time to elaborate. Once the fellow expired, we returned to Port Mirandia with his body to be questioned by those who speak with the dead, but when Ricky obliged us to that end it was clear there was nothing left of the dwarf. Taking precautions against the rise of an undead dwarf or a more horrid entity, we burned the corpse as befits a creature in such a state. Thus, the mine is now cleared of immediate danger and emptied, but we all have a conscientious full of worry as to whether the benefits of such a development will ever be enjoyed by our new home. 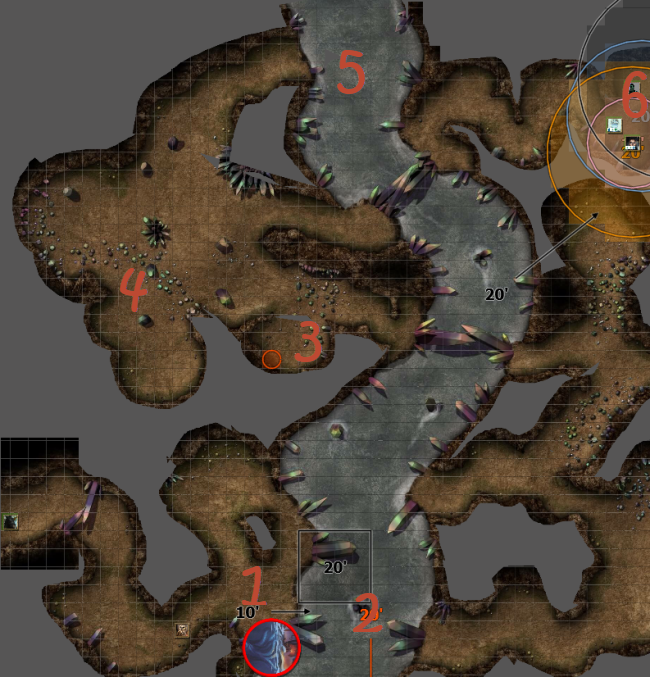