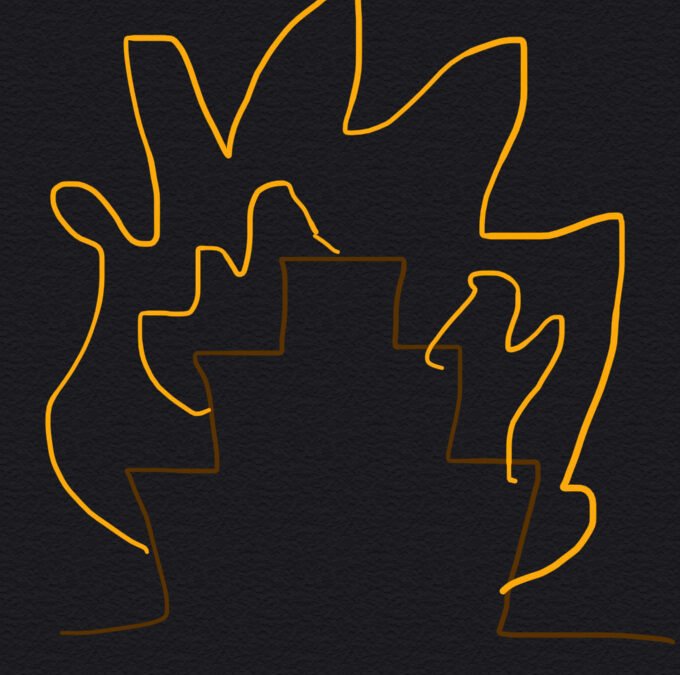 Yarsby suggested that we head north into the eastern forest to visit the lizard folk tribe. We stepped through the GQE portal with the intent to do so, but didn’t make it quite there. We were visited by a group of friendly elementals on the way there. They visited again in the night, beckoning us towards the northwest.

They led us to a terrible conflagration–a burning city of dead and dying lizardfolk. We ran into several yuan-ti in their various abominable forms, and did battle. One spat out a particularly memorable quote: “It is by will alone that I set my mind in motion. It is by the grace of Merrshaulk that thoughts acquire

We explored the city/temple complex, and came across a group of much larger snake creatures, as well as a human woman with startlingly blue eyes. The woman walked off with a six-headed snake humanoid, and we killed many other snakes. We later found out that the human woman was called the Sal, the Handmaiden of their god Merrshaulk. She is rumored to have lived since the Splitting (when Ubtao took the Tabaxi, they created a terrible flood, which forced the Sarrukh to move into the eastern forest.)

We found an ancient mural, and the matrons told us that it depicted the ancient slavers, the Khenra, and the races they subjugated. Firstly, the Sarrukh Lizardfolk. Secondly, the Tabaxi, followers of Ubtao. Thirdly, a strange ibis-headed figure, who they knew nothing about. Fourthly, the Mhair yuan-ti.

Regardless of our victories.

Regardless of the information we discovered.

What happened that night was a tragedy.

The histories of the Sarrukh, as well as an entire generation of theirs, was lost in one fell swoop.

But we saved some.

We limped back to town after that.