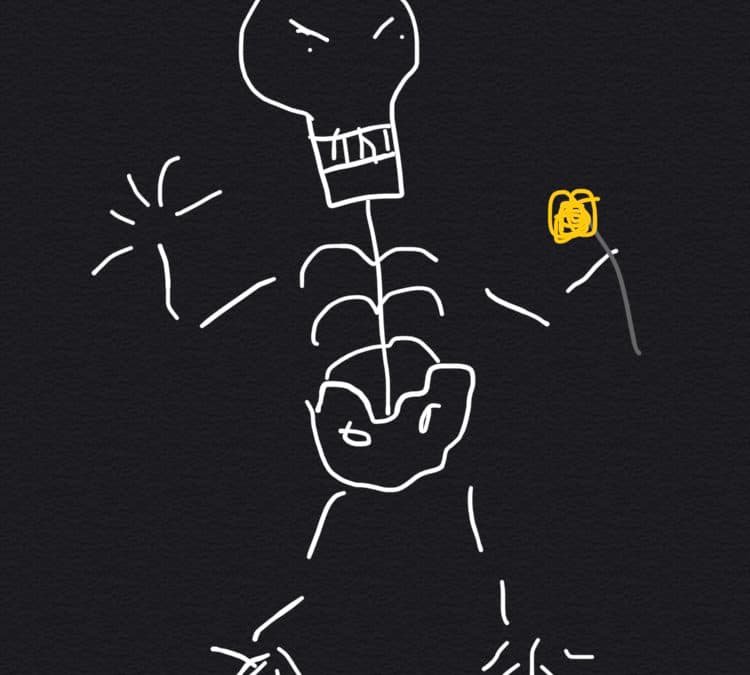 We set out on my second adventure on the island, with the aim of investigating a strangely abandoned town with a “strange” resident, whatever that meant. Our journey westward was fairly uneventful, and the only thing I discovered that the goblin, Zok, is a complete and total ass.

Eventually, we came across the ruins of a house. Inside, we discovered a skeleton sitting on a throne–all pretty standard, right?

Well, turns out that’s not true. Bone Boy started talkin’ ’bout how he’s from the time when elementals ‘n’ shit were still rippin’ the world apart. Scary old, man. He told us he’d refrain from killing us if we found his scepter and returned it to him.

Naturally, I didn’t wanna die, right? So I agreed, because I didn’t want him to lose his chill. Figured we could just find it and then not give it to him.

Then things went to shit. The fucker cast a spell on me–a damned powerful one, at that. As in, I’m damned good at resisting effects like that, and I should’ve been able to. But the spell was crazy powerful. He told me that I had until the fresh new skull tat on my hand filled up, and if I didn’t get the scepter back to him by then, I’d die.

We went to look for the scepter.

We were approached in the night by a weird sickly man who turned into a rage ape and tried to kill us. Fairly simple, standard fare for the island. When we killed it, it reverted back into the weird sickly man, and he had this silver pendant that looked like an ape around his neck.

Moving on, we found the abandoned town, presided over by a massive beehive, from which we heard shrill yells.

Inside, we found a small gnome woman ordering swarms of bees around, and yelling at us to help fend off swarms of wasps, as well as some big nasties. Never seen a man-sized wasp before, that was decidedly not chill, man. I managed to dodge all of their attacks, though–that was pretty damned cool.

The gnome, Bella Dee, was very friendly. She told us that she found the town abandoned, and had been keeping it up herself, setting her beehive up there. She willingly handed over the demonic scepter she was using for a honey stirrer, and gifted us with magical healing honey. She suggested that the scepter was the thing attracting the wasps, and was happy to be rid of it.

We were not disturbed as we slept in one of the abandoned houses.

On our way back to Bone Boy, we heard a crash of thunder and saw a bright light coming from that crater to the north there. Pretty wild. But upon our return, Bone Boy thanked us, removed my curse, and faded into the aether to “lay down punishment on the deserving,” whatever that means.

We done fucked up.

Our trip back to town was uneventful.