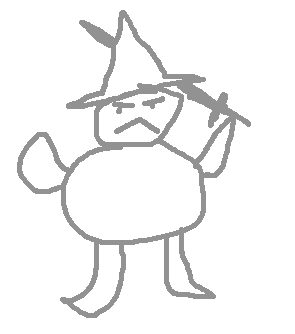 We headed out to Ruined Oak, the new girl turned into a bigass spider that scared the shit out of me.

We found Stu and Dede Nichols, and chatted with them—they invited us to stay the night, and informed us that there was a man stealing children out in the woods. We decided to go out n kill the dude.

We had a delightfully uneventful night.

We talked to Phil, Tommy, and another child, and they told us about a funny little guy with pale white skin and sharp teeth, who may be our quarry. His name was Tootles, and he wanted more children for his brothers. We headed out to the Silent Woods, finding it eerily silent. We did, however, find a gigantic boar, and attempted to track it in order for the druids to learn its anatomy. Regrettably, neither one succeeded.

That night, we ran afoul of some of the nasty grey-skinned creatures that the children mentioned. We killed four, and slept for the rest of the night.

The next morning, we found two extra sets of small footprints, likely belonging to the same type of creature that we killed, as well as that of a larger humanoid. All of these footprints were sprinkled with pixie dust. And not the fun kind, either.

We headed out back towards RO, and encountered a pack of hyenas. The goofball kobold managed to get a grip on their essence for the purposes of his Druidic magics. We approached an altar heavily engraved with scrollwork, dedicated to Lathander. The ridiculous kobold ate a cake on the altar. Moving forward, we reached the riverside, and saw a gigantic chimera flying above us with the giant boar in its jaws.

We slept for the night, finding it uneventful.

The next day, we encountered a Mister Migar Wafelbuttin, Traveling Weapons Merchant, selling him a couple of shortswords before making our way to the portal back to WMC.