Of Burning Blood and Broken Bones 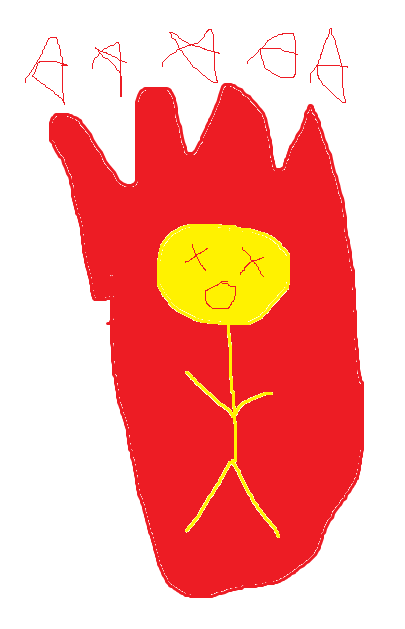 Headed through the WHI portal, this one displaying strange tentacles around the edges.

We hopped out on a peninsula, and saw a volcano in one direction, and a walled town to the northwest.

Te’sil made a big fanfare with fireworks and a big Sylvan illusion when we approached town, and the folk cheered.

Rose said the island was probably to the north of main Katashaka.

Rose set my blood on fire. I passed out.

I woke up, and Eddings was hitting me with a magic staff that healed me, and Te’sil…

And Haru… Haru gave me a shield.

Rose requested that we explore the temple’s second basement, and we decided to rest before doing so.

I wanted to help, so I forged Rose’s signature about two hundred times. I felt very helpful.

The next morning, we went downstairs and found a glowing door. The next room gassed the evil things in the room with radiance.

The next room had a statue of a single-eyed, spiked, disk, with many, many, many hands. Sylvan dusted it off, and we moved on.

We discovered tables and chairs, as well as lots of dust and bones, almost disintegrated. The bones had not been killed by natural causes.

The rooms were lit by red crystals swirling around the cieling, like alarms.

I touched some papers and read some things about a Feeder NE of Briggdarrow, a warning not to go alone, and and what looked like a name: Ir’thir.

I touched some more papers and read some more things about the same Feeder, a library of forbidden knowledge, and another name: Overseer. This one specifically said not to listen to your dreams.

We found a room with a big chair on which a skeleton sat, as well as a desk, a broken mirror, and a whole lot of levers and pipes, and a glowing crate.

We also found a book with a black sun, with arms reaching into it. It appeared to detail Ba-Pefs guard logs, as well as lots of sacreligious writings about Aten.

It was proposed that the mirror had been a prison.

We pulled on a bunch of levers and a bunch of doors opened and closed and it was all very confusing.

Eddings found some magical ballistae, and Sylvan opened a door. The next room was full of a weird evil darkness that flowed around the room like mist, crawling into my head and whispering, telling me to serve it.

In the next room were two golden golems, garbling in a multitude of languages: consume, serve, protect, servants of darkness.

Through a clever use of a Wall of Force, Eddings incapacitated one, and together, we killed them each. They proved to be impervious to my attacks – I miss my spear – but thankfully, Te’sil’s rapier sufficed.

We moved into the next room, in which a gigantic pedestal carved with the symbol of anti-Aten, with darkness spilling out of the wall.

To the north, we found a large ball of darkness chained up. It invited us to join it, and be reborn. Darkness spread, and a gigantic, horrible, shadowed, tentacled creature emerged.

Joule slew the creature, and it spat out a few defiant words before receding into nothing.

When we got back upstairs, Rose told us that the Feeder has many different forms. As Aten has Archons, the Feeder has Manifestations. Apparently, a few of them were contained a long time ago. Looks like Ba-pef was one of them.

She suggested that Yaldaboeth might have more information about the library, and told us that she’d visit Estara to ask about it. She invited us to visit more, and we headed home.