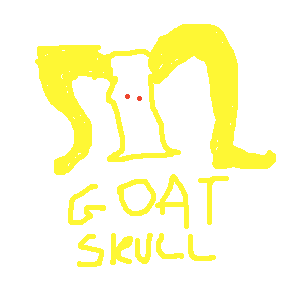 A merchant named Joshua offered to pay us for retrieving a group of workers that was three days behind schedule. We headed west towards Swollen Tooth, and found a light in the night.

We discovered two tents next to a bonfire. The tents were empty. We found bloody footprints, leading into the camp, but none leaving. We deduced that the bodies were most likely burned. In their bags, we found WMC armbands, and decided that these were most likely the workers that we were looking for.

In attempting to put the fire out, we encountered a strange amount of difficulty, as well as some sort of skull with golden horns, reminiscent of a Minotaur. When we took the skull out, the fire began to die in earnest. The skull registered as unholy.

That night, we were approached by a strange humanoid, carrying a staff. He had a very strange facial structure. I was told that he was a firbolg. He told us that he didn’t know what happened to the other people. He decided to sleep with us for the night.

Later in the night, it started snowing ash, and we found that the skull had thrown itself back into the flames. Karash accidentally smashed the skull, and a charismatic, omnipresent voice addressed us, consoling us and telling us that we were loved. All we had to do to join their loving, caring family was jump into the flames. We didn’t buy it, and watched as from the ashes of the firbolg, a horned skeleton with a golden ribcage arose, and summoned up terrifying thralls, creatures that looked as if they had walked through a blazing inferno and come out the other side.

We killed them off, the horned spellcaster’s spirit seeming to transfer into its minions as we killed it. Eventually, I managed to pin it down and grapple it while people killed it. As it died, it promised us it would be back.

The horns were retrieved from the fire, and we finished our rest, heading back to town in the morning. We saw some sort of done a few miles southeast of Ruined Oak, but ignored it.

The merchant was very distressed upon discovering his dead friends, but gave us the gold. Ogis and Valorean performed last rites. Nalkris seemed very shaken by the entire ordeal.