Of Mountains and Mithral 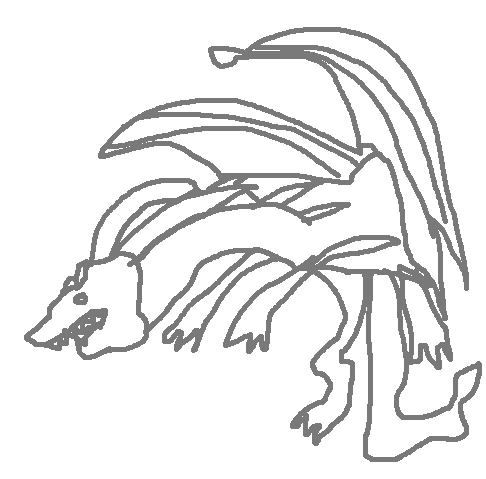 Went to MID, only to find that the ant-lion problem had been taken care of. Instead, we struck out Eastward to find this Duri’Manon fellow. We passed a family of brown bears, and sighted a wyvern in the distance, before happening upon a small camp on the beach, inhabited by hobgoblins. We moved on, settling for the night.

Ogis created a RIDICULOUS amount of food. We were approached by representatives the Gruff Gruff Tribe of hobgoblins. We explained our purpose to them, and found that their tribe is willing to maintain friendly relations as long as we don’t attack them or their people. That is, any hobgoblins (and maybe goblins?) without double war marks underneath each eye. Their village is 2 hexes east of Port Mirandia. We explained that WMC Armbands meant that we were friends.

These hobgoblins explained that the Sunter tribe, lead by War Chief Zulgor, are bad. Their territory is more to the south, but they wish to expand their territory to the whole valley. They are evil, and distinguished by double war markings underneath each eye.

In the night a large wormish creature swayed in the night. Ogis fed it, and it went away.

We moved onwards, and eventually found large granite spiky rocks, some more than a mile high, with what looked like tiny birds up near the summits. Soon, however, as we pushed into the mountains, large shadows from above provided macabre shade. Wyverns swooped down from below, with strange lion-like humanoids.

We killed one of the wyverns and its rider, and Ogis was carried off by the other. We chased after them, and found a beautiful mountain temple decorated by beautiful, gargantuan statues of bird-like humanoids. We crossed a living vine bridge that saved Nahil and Cade from death by falling.

There we found a huge, mithral-colored dragon, named Yaaahhasssss. They commended us for our bravery on the bridge, and bravery in combat. They told us to be wise, nimble, and strong in order to find the obsidian we sought. Additionally, they invited us to take the Trial of Night and Day in order to gain their trust. Finally, they returned Ogis to us safe and sound before inviting us to sleep for the night.

The warrior Zimhooma Zat lead us to the Cave of Night and Day in the morning. He charged us with finding the orbs of the Rising, Midday, and Setting Sun and returning to him with them.

Entering the cave, we chewed through some specters, many hounds, and some sort of small, grey, creature who threw lots of large rocks. Very large, very painful rocks. Ogis found a softly glowing orb held by a birdlike statue, and then plucked an orb from a campfire. We ventured into a spot of inky blackness, some sort of magical darkness, and finally found the last orb, guarded by an earth elemental. Only Ogis’s quick thinking and capable dispelling magic allowed us to see enough to destroy the elemental.

Returning to Yaaahhasssss, they informed us that they trained mighty warriors, strong in mind and spirit, and seemed willing to train those of the more… monkish nature, as well as maybe druids. It could be worth it for the likes of Grey and Oogway to make the pilgramage.

Yaaahhasssss’s wyverns carried us back to Port Mirandia, and we spent the night there before venturing home.