Tentacles in a Cave Again

A shady figure named Grinbus walked into the A&T. He told us of a wailing ghost in the Ishah plains. A ghost whose wails were so violent they could kill. Grinbus seemed very concerned about these innocent victims but according to Freyja he wasn’t the type to worry about others. How bizarre.

We journeyed to the crossroads where we spotted the silouhette of a man off in the distance looking over the flat terrain. Zostla was useful although quite cautious. Perhaps it was his snake heritage that made him so cold or perhaps he was just used to dealing with the dangerous citizens of Katashaka. When asked about the peglegged Grinbus, he said he had never encountered a man with such a name, but he had seen “foot” prints. These tracks had been in locations where terrible massacres had taken place. Twice they had been seen near mysterious slaughters. Corpses mutilated beyond recognition. We thanked Zostla for his information although we questioned its validity.

We marched on until evening at which point we set camp. During the night I spotted smoke a mile away but by dawn there were no sings of life. Ebba and Des discoverd tracks moving to the NE. We decided to follow them investigating the possibility of them being related to the mystery. It appeared that many individuals had passed by but their origin was undetermined.

The tracks lead to the mouth of a cave. Being curious folk we ventured in. The cave featured mozaiks of Yuan-ti origin. There were piles of rubble and yet no visible dust.. Deep in this cave we saw puddles of salt water. Before we even had time to approach a tentacle was seen! 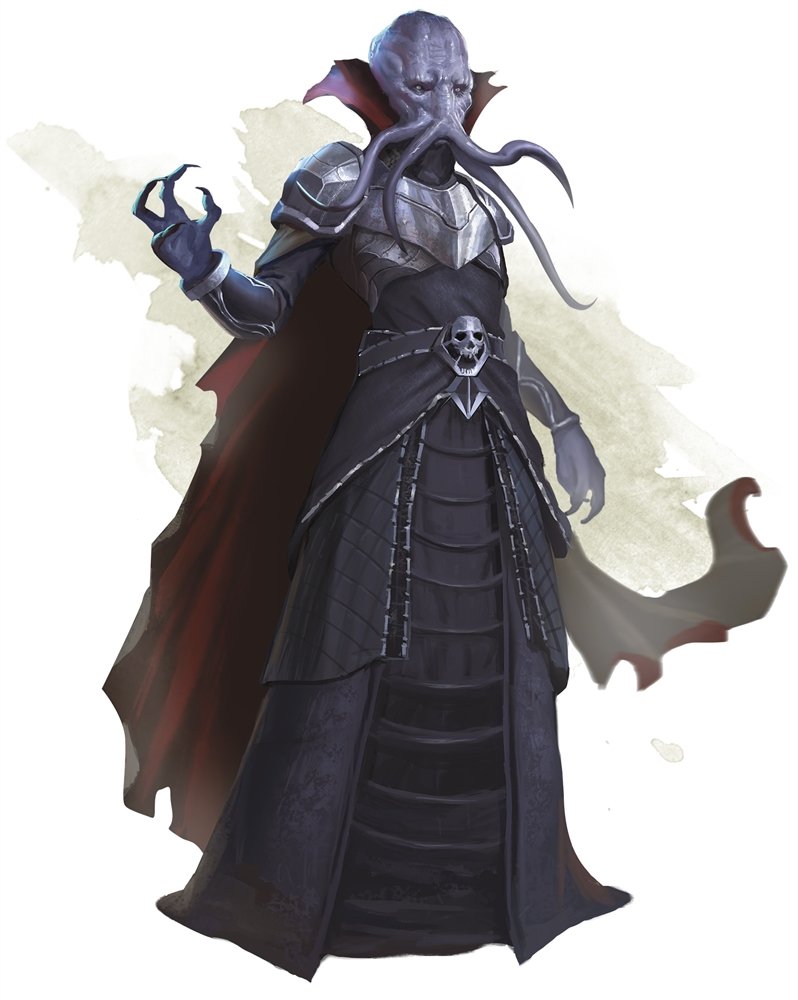 The tentacle belonged to a mind flayer. One of many of these horric creatures that feed off the mind! I managed to run around a corner as Freyja sacrificed herself to hold them back.. The monsters used violent psionic energy to stun the party. I instantly regretted my decision, as I ran back to try and help my friends. Ebba was grappled by 2 of them as they began extracting her memories.. Viran started running but Des and Orianna were still shaking off the effects. I grabbed Orianna by the hand and began dragging her away. We ran hand in hand as Des teleported out of the enemies arms and sprinted by our sides. Viran used one of his powerful runes to just barely get out as he was chased. It was a close call but we managed to escape the cave.

Our loses were numerous and we didn’t wish to continue in such a flustered state. We returned to WMC filled with sorrow and grief having lost close friends and strong allies. This Grinbus affair needs to be checked out at a latter date.