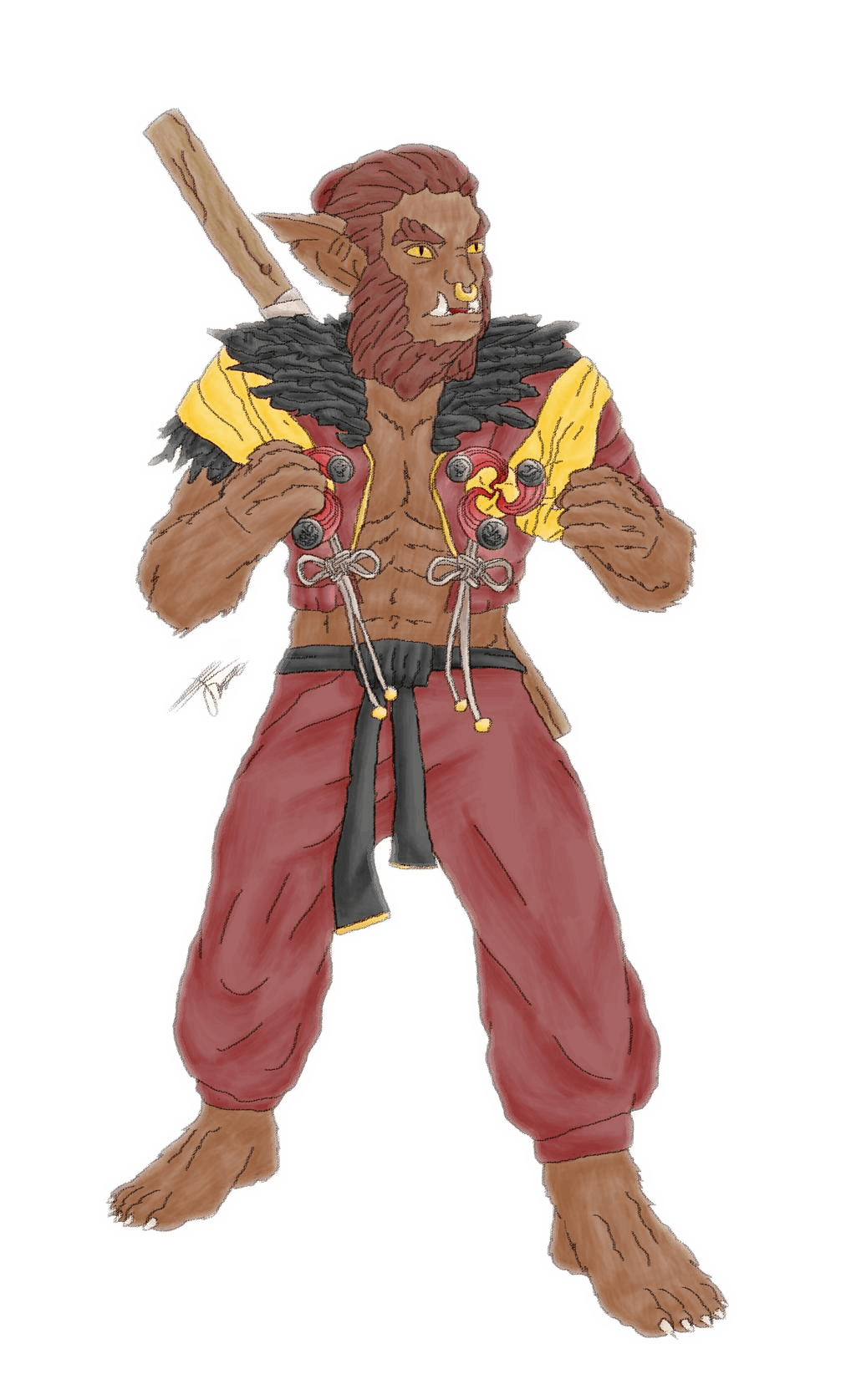 Broc O’Doyle Lee prior to the arm tendrils

Broc has a rather unusual past. Former human, now transformed as a Bugbear. Broc has spent his life serving the arcane mistress Chariese Moonflower, at a long forgotten temple. He is known to be very promiscuous and will generally provide protection for Ale to adventurers that do missions for him.

He is currently very I’ll due to an aberrant graph at the hands of Eziekiel while he was a prisoner of his.

He is now healed from the curse upon him as the fire snake page was delivered to him. Mistress Charice Moonflower did the healing upon her arrival for the page.

He was convalescing inside a cave awaiting the collection of the fire snake and beholder eyestalks as that would bring about his cure.

Eziekiel, under a the pseudonym of Eziquos had agreed to cure him if adventurers delivered a hexagonal red door to his “family farm.” Job has been complete, he did not keep his word.

On a visit to WMC, Broc gave birth to a baby beholder that was named Iris by Yatari. The baby was taken by adventurers to “Lord Jamb” which ended up being ezikiel at his families farm.

“He told us that he used to be a human but turned into a bugbear due to a magical mishap. He projected his astral form and showed us an image of a human with blonde hair, small mutton chops, glimmering eyes, and a toned physique. It was an ability that I had not seen before. Kita asked who the sorceress was that enchanted him. Her name was Chariese.“

“Once we were cleared the area we found the fellow bugbear, Broc with an awful mutilated arm that looked cursed and undead-like with pink maggot coming out from boils on the arm. Many of the companions could not dare handle the smell or visual of the arm at the beginning with the exception of myself and Dexter. None of my curing powers were able to cure the arm of anything but i was able to restore some life back to Broc while Dexter was able to use some form of freezing spell to freeze the pink maggots from the arm while being able to save one for potential studies later on.“

“we travelled to the abode of one Brock O. Lee, who is a Bugbear. His companions are two ogres, Dee and Dum. He seems well known in the area and trades with the local folk, as he was in the middle of the trade of some pigs when we arrived. Upon seeing we had bought a keg (I should have mentioned that at the beginning, we pulled it along with us on a shield), bought the pigs and we proceeded to feast the rest of the day away, exchanging tales of the local area, and specifically, a place where a doormaker was seen. Brock even helped by giving Kita a doorknob, which indeed held some magical properties. “

“On the fifth day we were able to head to Broc’s where we met Jerry and Broc and an elf lady by the name Moonflower. We gave the paper from the fire snake to them and the elf lady casted a magical ceremony with the paper and the beholders eye stock we recovered earlier in the week. She took some green magic and smashed it with the eye stock to make a powder and slammed it into Broc’s chest. This reaction with magic caused the curse on his arm to fall off leaving his normal Bugbears arm. Broc was very ecstatic to his arm back and took care of us for the services.”