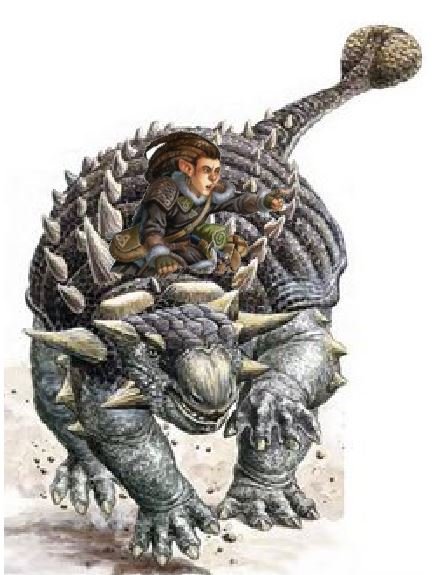 The New Hope Gnomes are located just north of the mountain range home to the Re Hope Dwarfs. They are located in a small clearing in the forest and have a walled off base camp that currently houses a mixture of assorted races but are mainly forest gnomes that dwell there.

Forest Gnomes make up a majority of the camp, they are locals to the forest that have lived there over the centuries. They have passed down their knowledge of the local dinosaurs in the area. They are well trained in the handling and riding of the common dinosaur in the area, Ankylosaurus’s. They currently have six of these creatures tamed and under their control. They use these beasts to clear the local forest in the area for the potential growth of their people. They also use these creatures as mounts and patrol the local woods.

A retired captain, that happens to be human, from a former military force in the region. He is now the acting leader of the gnome camp.

Felix is the head dinosaur tamer and controls al of the dinosaurs that the New Hope control. He is the only known Gnome in the camp that has the ability to tame wild dinosaurs in the area.

Cindermint is one of the dinosaur riders that the New Hope have. She patrols the wilderness surrounding the camp. Her dinosaur she in in control of goes by the name Duke.

“…Captain Moorilton. He said their settlement’s name was the New Hope Gnomes that are based off of mainly gnomes that are local to the forests and follow their ancestor’s knowledge of taming dinosaurs. They use dinosaurs that have been passed through the generations by their ancestors and are in currently in the possession of six ankylosaurus. All six dinos are tamed and help them clear the area surrounding the area to make sure there are no hostile enemies that try to attack them.”