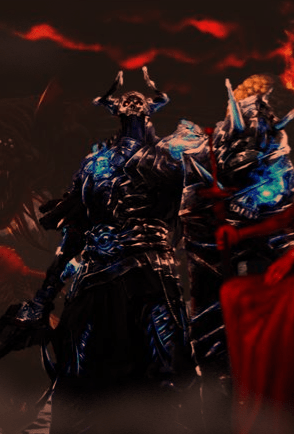 Tsaran is an early Rashemen explorer that came to Katashaka along with a crew. For a time he was hunted by the council but has managed to stay on the lamb. He works with ancient blood magic and has forces of warlocks, mages, blood elementals and others at his disposal.

Adventurers have ran Tsaran from his fortress Uptop the Jub Jub mountain, leaving it to crumble behind them. Tsaran ran with what is presumed his master through a portal and towards the North Eastern forrest.

He is the confirmed leader of the Blood Legion. His goal is to raze and burn the towns of WMC, take control of the locturn, and Restart the Blood Scourge. He as well has a master known to us only as the Blood Lord.

The archivist has a log of the early Rashemen expedition. It details Tsaran’s betrayal of his shipmates. He was hoarding 7 stones that could open or seal the primordial Gorgontillian in its prison.

“the opening of the doors which laid beneath, and the chance to see Tzaran escape with his bloody lord via portal while the temple complex collapse on itself. – We escaped using the same device they used, which transported us a day away from the Dwarven City State, according to my navigation instruments.”

“Tsaran is the main leader of this Blood Legion. He wants control of the locturn, he wishes to wipe out all of us and raze our towns. He is working heavily at reactivating the blood scourage. He also does have a master confirmed as the blood lord.“

The Spy who stiffed me